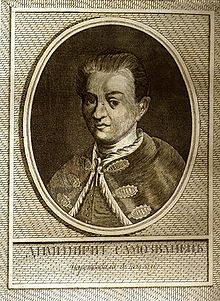 Demetrius from the Schiller Gallery ;
Steel engraving by Sichling after Pecht , around 1859

Otrepev was the son of the insignificant petty nobleman and leader of the Hundred Riflemen Bogdan Otrepev. His parents both died prematurely, so he was placed in a monastery as a child and later began a spiritual career as a monk Grigory, wandering from monastery to monastery. He may have attained the rank of deacon. In doing so, he ended up in a monastery in the Moscow Kremlin , where he observed the balance of power and the dissatisfaction in the higher ranks very closely, and he also knew how to secure the protection of his superiors as a very good student. In Moscow he also heard rumors that the legitimate son of Ivan the Terrible had in fact escaped the assassination attempt planned by Boris Godunov and, like Otrepev himself, had been taken to a monastery by his mother Maria Fyodorovna Nagaya . In much of the population because the hope was widespread in the accuracy of this story, it seemed obvious to Otrepev, for this Tsarevich issue. Further stations of his wandering life were the Kiev Pechersk Lavra and stays with Arians and Cossacks .

For the first time he appeared as Dimitri on the country estate of the Polish-Lithuanian Prince Adam Wisniowiecki and claimed to be Dmitri Ivanovich . His opponents claimed that his real name was Grigory Otrepew and that he was a monk from the Chudov Monastery . Dimitri's story found faith, however, and his claim to the Russian throne was supported by Polish magnates and Catholic prelates, such as the papal nuncio in Kraków, Claudio Rangoni. After he had secretly converted to Catholicism , he became engaged in 1604 to Marina Mniszech , daughter of Jerzy Mniszech, the voivod of Sandomierz . He promised her family Pskov , Novgorod , Smolensk and Novhorod-Siverskyj . In March 1604 he was from Sigismund III. was received in a closed audience, the latter decided to support Dimitri politically, but not militarily, without the formal approval of the Sejm. Magnates who would join Dimitri's campaign should be given a free hand. In return, the monarch, like the Catholic Church, made numerous demands in the event of success, which would have meant a unilateral advantage in favor of the Poles.

Dimitri quickly won numerous followers among the boyar families hostile to Boris Godunov . Its leader Vasily Shuisky , who investigated the death of the little tsarevich on Boris Godunov's order in 1591 and declared it to be an accident, confirmed the identity of the pretender to the throne with the allegedly murdered man. Supported by Polish-Lithuanian troops and in secret agreement with the Polish King Sigismund III. he moved to Russia in October 1604 to enforce his claim. His troops conquered several places, but after a lost battle, Dimitri only saved the news of Boris Godunov's sudden death from the dissolution of his army. In the meantime it had also been reinforced with a few thousand Cossacks. Dimitri and his troops now moved into quarters in Tula and waited for developments in Moscow. The Russian troops went to Dimitri in May 1605 and Muscovite boyars arrested Godunov's 16-year-old son and heir Fyodor and his mother and sister. On June 20, 1605, Fyodor and his mother were murdered. Dimitri entered Moscow the following day and was crowned tsar on July 21, 1605 . He made Fjodor's sister Xenia his lover and then forced her to go to the monastery.

First Dimitri visited the grave of his alleged father and the monastery in which his widow lived. Maria Feodorovna Nagaya recognized him as her son. Nobles banished by Godunov were allowed to return to Moscow, the Moscow Patriarch was replaced. As a ruler, he endeavored to lead an independent policy both internally and externally. His government first tried to make itself popular with the petty nobility by ceding confiscated monastic property to the families. Dimitri assured the peasants, whose serfdom Godunov had tightened in order to win the favor of the nobility, ten years of tax exemption and less labor. He was considered a critical and popular tsar who anticipated some reforms of Peter the Great . His attempt to rule based solely on the common people failed, however, as he lost all support of the Russian aristocracy. In addition, his social improvements proved to be short-lived, the vast majority of the Cossacks, to whom he had promised numerous "freedoms", went away empty-handed and runaway serfs were handed over to their masters again if they had not fled more than five years ago. The Polish allies, too, pressed more and more impatiently to obtain the promised privileges. In addition, according to the contract, Dimitri should have sent an army for the Polish-Lithuanian attack on Livonia and had to agree to the subsequently increased cedings of territory, which would have meant the immediate end of his rule.

In the autumn of 1605, Dimitri married his fiancée Marina Mniszech in Krakow by proxy ( by procuration ) of his secretary Afanasij Vlasev, according to the Catholic rite. With her father and a Polish army, she entered Moscow in early May 1606. A second Russian Orthodox wedding was held there on May 8, 1606 , which inconveniently coincided with an Orthodox holiday on May 9. The Polish soldiers, the wedding that lasted several days, during which the bride and groom wore Polish dresses, and the promotion of foreign merchants stoked fears in the Russian Orthodox population. Masked balls and fireworks on the one hand, and doubts about the bride's orthodox beliefs on the other, irritated broad sections of the population. Rumors circulated that Dimitri's Catholic and Lutheran soldiers were planning a massacre in Moscow. In a revolt instigated by Prince Vasili Ivanowitsch Schuiski and his brothers, he was fatally injured by bullet fire on May 17, 1606 while attempting to escape. His body was exhibited in Red Square and then cremated, and the ashes shot west with a cannon. The number of murdered Dimitri's supporters is estimated at 500. Dimitri's wife, her father and numerous other Poles were interned in Yaroslavl , Dimitri's soldiers were deported to various cities. Likewise, the patriarch Ignatij, appointed by Dimitri, was sent to a monastery.

His successor was Vasily Shuisky as Vasily IV . The peasants and Cossacks under Ivan Issajewitsch Bolotnikow fought for Dimitri and his reforms until 1608.

Besides him, there were at least two other people who pretended to be Dimitri Ivanovich. The second false Dimitri (Pseudodimitri II) († December 11, 1610 in Kaluga), who posed as the saved Pseudodimitri I and was also recognized as such by Marina Mniszech , gained political influence . She also accepted the third false Dimitri, who appeared a few months after the execution of the second, as her husband. Even after his execution in 1612, she continued to try to bring her son Ivan (of Pseudodimitri II), born in 1611, to the throne of the tsar. This attempt ended in 1614 with the public execution of the three-year-old. Marina Mniszech died in prison.

In the drama Boris Godunow by Pushkin , as well as in the opera of the same name by Mussorgsky based on it , the events of Dimitri I are processed. Friedrich Schiller (see Demetrius (Schiller) ) and Friedrich Hebbel also deal with the subject in their unfinished dramas Demetrius . The question of the rightful (real) Dmitri continues to concern historians in all countries.

The wrong Dimitry (silent film 1922, by Hans Steinhoff ) was a cinematic adaptation of the subject.