Portrait of France Prešeren (before 1849)

France Prešeren (formerly often Germanized Franz Preschern ; * December 3, 1800 in Vrba in the then Duchy of Carniola ; † February 8, 1849 in Kranj , then Krainburg) is considered the greatest Slovenian poet .

France Prešeren was born the third of eight children to a rural family. After attending school in Reifnitz and Ljubljana , he studied in Vienna Law , where he became interested in poetry. After receiving his doctorate, he worked as a lawyer . During his studies in Vienna (1821-1828) he met the German-Carniolan poet Anton von Auersperg (pseudonym: Anastasius Grün ) at the Klinkowström Institute on Schlesingerplatz (memorial plaque) , as well as the Slovenian literary scholars Bartolomäus (Jernej) Kopitar and Matthias Tschop (Matija Čop) . In 1832 he moved to Klagenfurt . There he passed the bar exam at the Court of Appeal (memorial plaque on Neuer Platz) on May 26, which he almost failed because he was also doing research for the accused - this affected his entire further career; He applied several times in vain for a law firm, which he received in Krainburg (Kranj) in 1846. In Klagenfurt he came into contact with the Carinthian Slovenian writer Urban Jarnik , whom he visited in Moosburg , and with the spiritualist Anton Martin Slomšek . In Laibach (Ljubljana), where he lived from 1828 to 1846 as an employee of a law firm, the cosmopolitan found little approval and was lonely; his great love Julia Primitz (Julija Primic) wanted nothing to do with him, although part of the edition of Poezije had her name in the acrostic . In 1839 he met the worker Ana Jelovšek in her house, who bore him three children, but then left him. All alone he died of cirrhosis of the liver . Today he is considered the Slovenian national poet.

Prešeren wrote love and nature poetry as well as a great historical epic The Baptism on the Savica ( Krst pri Savici ). In 1847 his main work Poezije ( poetry ) appeared. With his German poems and sonnets , he is also part of German-language literature . His most important German-language work is The Great Gate ( Ta velik Vrata ), in which he explains his connection to Ljubljana. 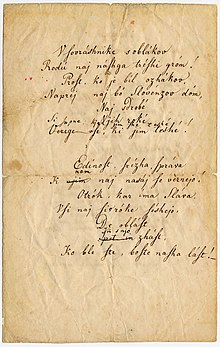 The main square of Ljubljana, Prešeren Square, was named after Prešeren .