The geographical longitude (also longitude or just longitude , λ , Latin longitudo, English longitude, internationally abbreviated as long or LON) describes one of the two coordinates of a place on the earth's surface , namely its position east or west of a defined (arbitrarily determined) north -South line, the prime meridian . 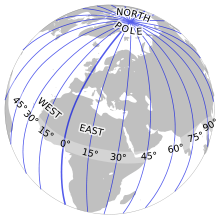 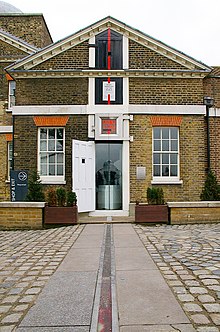 Longitude is traditionally given in the sexagesimal system with angular degrees , angular minutes and angular seconds . Here, one degree ° is equal to 60 minutes and, similar to time specifications, one minute ′ is equal to 60 seconds ″ . A great circle is 360 ° or 21,600 ′; decimal degrees are given after the decimal point .

Measured from the center of the earth, a minute of arc along the equator corresponds to the 21,600th of a great circle of around 40,075.017 km, i.e. an arc length of around 1855.32 m. Since the earth is flattened due to its rotation , its equatorial diameter is larger than its diameter between the two poles. Therefore, a meridian is only about 20,003.932 km long and one minute of arc along a longitude corresponds to an average of about 1852.216 km, around one nautical mile (1852 meters).

Since longitudes intersect in the poles, their distance from one another is zero there. With decreasing geographical latitude , the distance between the meridians of different degrees of longitude increases and becomes greatest at the equator. Here the distance between places whose equatorial position differs by exactly 1 ° = 60 ′ in length is about 111.319 km. One degree difference in length corresponds to around 102 km on the tropics , around 44 km on the polar circles and around 1.95 km at 89.0 ° latitude .

Since there is no natural zero mark for the meridians, as the equator represents for latitude measurement, a zero meridian must be defined . Different stipulations have been made for this in the past. It was not until 1884 that the meridian on which the central axis of a certain telescope of the Greenwich Observatory in London is located was uniformly established worldwide .

Instead of the sign (traditionally + East, - West), E or W is also permitted. The abbreviation E for East (of English. East ), for example from that for nautical and air navigation recommend relevant DIN 13312, in order to exclude errors caused by confusion of O with 0 or with the French abbreviation for West ( "ouest") from the outset.

The values ​​of the degrees of longitude are between 180 ° W and 180 ° E or between −180 ° and + 180 ° longitude (Long). In seafaring in particular, 3-digit sequences of digits are preferred for length specifications, for example 010 ° 43.1 'E. This emphasizes the difference to the latitude specifications, their value range from 90 ° N to 90 ° S or from + 90 ° to -90 ° latitude (Lat) is sufficient, which means that three-digit numbers are not reached when specifying degrees.

Longitude can be specified with varying degrees of accuracy and displayed in various formats, e.g. B .:

The Greek astronomer and mathematician Hipparchus (approx. 190–120 BC) divided the earth in an east-west direction for the first time in 360  degrees .

For a long time , the reference system for length counting was inconsistent in European shipping . From the 2nd century AD to the 19th century, the ferro-meridian dominated , which was established by Claudius Ptolemy and refers to the westernmost Canary Island El Hierro (17 ° 40 ′ W).

Depending on the nation, coordinate networks related to zero meridians in London , Paris or St. Petersburg . It was not until the International Meridian Conference , Washington 1884, that Greenwich near London was specified worldwide, partly because British nautical charts were used worldwide.

Determination of the geographical longitude

While the latitude by measurement of vertical angles of the sun or the Pole Star is relatively easy to determine, the determination of the actual geographic length with similar accuracy for a long time designed extremely difficult. This length problem , which is important for sea navigation , was not solved until the end of the 18th century. This requires very precise clocks that function reliably even in rough seas without being affected by weather influences such as heat and humidity. The first watch that met these requirements was the "H4", which was built by the carpenter John Harrison and completed in March 1762. Harrison only received the prize money of 20,000 pounds awarded by the Length Commission of the British Parliament after a decree by King George III. in 1773. In order to achieve the required accuracy, he had made his watch using almost frictionless ball bearings and bimetal systems (independent of temperature).

When a transatlantic cable for telegraphy landed in Valentia Island , Ireland, in 1866 , deviations in the length differences between North America and Europe, which previously had inaccuracies of up to 850 m, became clear on October 24, 1866 through the exchange of telegraphy signals and thus a synchronization of the measurements be reduced.

The indication of a geographical longitude can vary in the range of seconds if different reference ellipsoids or another geodetic datum is used.