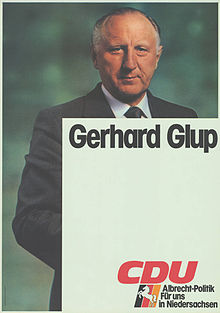 Candidate poster for the state election in Lower Saxony in 1978

Glup was born the son of a farmer. After attending primary school and completing secondary school, he completed practical training in agriculture. At the same time, he continued his education at technical schools and with specialist courses. In the fall of 1940 he was drafted into the Wehrmacht and then took part in the Second World War as a soldier until 1945 . He then worked in his parents' agricultural and forestry business, which he later took over. In 1950 he attended the country folk high school. He was married and had a total of six children.

Glup was from 1956 to 1968 council member of the city ​​of Friesoythe . From 1967 to 1986 he was a member of the Lower Saxony state parliament . From 1972 to 1976 he was chairman of the committee for food, agriculture and forestry. Since 1960 Glup was first alderman of the city of Friesoythe. On February 13, 1976, he was appointed Lower Saxony's Minister for Food, Agriculture and Forests to the state government led by Prime Minister Ernst Albrecht . The planning for the Lower Saxony Wadden Sea National Park fell during his term of office . In addition, he became known through the so-called "Liquid Manure Decree" of 1983, in which limits on nitrogen fertilization and an application restriction for liquid manure and poultry manure in the winter months were set for the first time. Between 1983 and 1985 he was criticized for the Münchehagen hazardous waste dump , in which the substance TCDD , known colloquially as Seveso-dioxin , was found in high concentrations . On July 9, 1986, he resigned from the government and was replaced as Minister of Agriculture by Burkhard Ritz .

As Minister of Agriculture, Glup has come under criticism in the media several times, among other things because of his hunting events, at which pheasants previously held in captivity were released much later than allowed so that his hunting guests had a good chance of shooting them. Furthermore, he violated nature conservation requirements several times on his farm.