Gerrymandering (originally [ ˈgɛrimændərɪŋ ], but now widespread [ ˈdʒɛriˌmændərɪŋ ]) or constituency shifting is a political science term that describes the manipulation of constituency boundaries in a majority electoral system in order to maximize one's own chances of success. A pure proportional representation includes gerrymandering from. The term is a portmanteau word from Gerry and Salamander : Elbridge Gerry , a governor of Massachusetts , had cut his constituency in the early 19th century so that he - as a contemporary newspaper cartoonist noticed - a salamander possible.

This practice is still widespread to this day, particularly in the United States . In many democracies around the world, the redesign of constituencies in order to avoid distortions has been entrusted to independent commissions, for example constituted by constitutional judges, such as the Delimitation Commission of India . In the United States, on the other hand, the legislative or executive branches of the states - and thus organs that pursue party-political goals - are often responsible for drawing these boundaries for congressional constituencies .

When gerrymandering several strategies can be distinguished:

Illustration: Despite the majority of the blue votes, the red party wins two of the three constituencies with this constituency layout.

Stronghold building
Summarize as many opposition voters as possible in a “throw-away” constituency, so that many surplus votes that are no longer required for the election success are generated, which the opposition then lacks in other constituencies.

Incitement
This is possible if only residents of this constituency are eligible for election. A constituency is formed in such a way that two currently active members of the opposition have their residence in it. One of the two must move or run against the other in the next election or give up his seat.

One hand washes the other
Both parliamentary groups jointly divide up the constituencies in such a way that current seat holders are very likely to be re-elected, while opposing candidates have little chance. Exhausting election campaigns and electoral promises that are difficult to keep are thus avoided, and the MPs hardly have to pay any attention to the swing voters of the political center and can thus be better brought to the party line.

Prison Gerrymandering
In the US, inmates count for where the jail is located, but are banned from voting in 48 of the 50 states . Because most prisoners come from urban areas and are disproportionately black, this practice means a shift in weight towards rural, mostly white-populated constituencies (where many of the prisons are located).

Parts explanation of the current situation seem inadequate since 2018 is out of date to be .
Please help to research and insert the missing information .

Example of strongholding: Florida's 5th constituency (2011–2015) connects the “black districts” of Jacksonville and Orlando, which structurally lean towards the Democrats. The Republicans tried to influence the surrounding constituencies in the greater Orlando area in their favor. 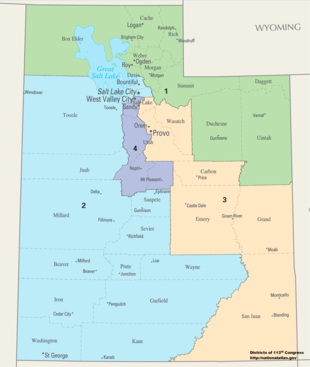 Example of dilution (cracking): Republicans divide urbanized and democratically dominated Salt Lake County (1.03 million inhabitants - about 37% of the total population) into three counties to ensure that the Republicans have a structural majority in all four counties.

In the United States, electoral districts are increasingly systematically designed using computers and data mining , so that only about one of 15 seats in the House of Representatives has a chance of victory for both major parties, while the remaining seats are largely in the hands of one of the two parties. In the Senate , whose seats include entire states, it is not possible to change the electoral districts. 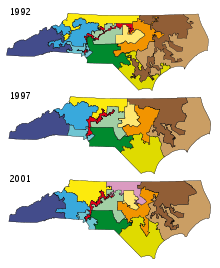 As a rule, constituencies in the individual states are reassigned every ten years shortly after the census. After the Republicans won a majority in the state legislature in Texas in 2002, in 2003 they replaced the Democratic- friendly constituency for the US House of Representatives with one that was favorable to them. In the 2002 election, Republicans had 59% and Democrats 40% of the vote for the House of Representatives, but Democrats had 17 (53%) and Republicans 15 (47%). According to the reallocation, in the 2004 election, Republicans received 21 representatives (66%) with 58% of the vote and Democrats 11 (34%) with 41% of the vote. The reallocation attracted a lot of attention because some Democratic MPs tried to prevent it by traveling to neighboring states, thus preventing the Texas quorum of two-thirds of the MPs from being achieved. At times, the Ministry of Homeland Security searched for these MPs without success. After several special meetings, the Republicans pushed through the plan. Subsequently, the new constituency was attacked in court. The United States Supreme Court ruled in 2006 that the reallocation was essentially lawful even between censuses, but that a constituency had to be re-delimited because the majority of Latinos there had been overturned without justification, which constituted prohibited racial discrimination.

The 2004 Supreme Court ruled in the Vieth v. Cheers that Gerrymandering is not unconstitutional as long as it is practiced for political and not racial reasons. Judge Anthony Kennedy , who from the 2000s had often cast the decisive alternating vote between the right and left camps of the Supreme Court and was the decisive vote in this ruling, left it open at the time, however, that this could change in the future if the plaintiffs be able to present a legally manageable standard for gerrymandering.

In 2017, the Supreme Court ruled to hear one such case ( Gill v. Whitford ), which attacked constituency layout in the state of Wisconsin . With the so-called efficiency gap , the plaintiffs proposed a method of making the effects of gerrymandering objectively measurable. The Supreme Court unanimously dismissed the lawsuit in June 2018 because the applicants had not alleged violations of individual rights. The conservative judges Clarence Thomas and Neil Gorsuch stated that they saw no possibility for such a right of action in the future either, while the four left judges in a special opinion pointed out the possible violation of the 1st Amendment to the Constitution and thus a way for a new referral to a similar one stored cases.

Below the federal level, in some states, legislative or judicial decisions have made gerrymandering difficult. In 24 states, for example, it is possible to amend the state constitution with the help of a referendum. This enables the population to prescribe standards for the creation of constituencies by the legislature. In Florida, for example, an amendment to the constitution has stipulated since 2010 that the constituency division may not favor or discriminate against any party or incumbent. In addition, constituencies must be coherent and compact and respect political and geographical borders as far as possible. On this basis, in 2015 the Florida Supreme Court overturned the 2011 constituency division.

In Pennsylvania , the Supreme Court ruled in February 2018 that the previous congressional constituencies were designed to give Republicans an unfair advantage and ordered a new constituency delimitation by an independent expert. In the code for the elections in the United States in 2018 on May 8, 2018, the voters voted in Ohio with 75 percent support for a constitutional amendment that ensures that the minority party in the State Legislature receives impact on the electoral boundaries to promote compromise solutions . Similar measures are on election day in November in the states of Missouri , Colorado , Michigan and Utah .

A federal district court in North Carolina ruled in late August 2018 that the previous division of the state's congressional electoral districts was politically unfair. It decided at the beginning of September that the constituency boundaries will not be changed before the upcoming election in November 2018, but will have to be redrawn afterwards.

In Germany, personalized proportional representation is predominantly used at the federal and state level ; However, through the establishment of a direct mandate and especially a basic mandate and an overhang mandate , there are also elements of majority voting.

When clean slate of parliamentary constituencies in Berlin in 2001, allegations came on, western and eastern districts were linked so that the chances of the PDS to direct mandates would be minimized.

The redesign of the state electoral districts in Saxony before the state elections in 2014 was criticized by the opposition parties. With the new constituency borders, the direct candidates of the CDU would be given an advantage.

Gerrymandering practices exist in almost all majority-voting countries, among others

Without having anything to do with the right to vote, the division of the Austrian state of Lower Austria was also referred to as Gerrymandering in 1920. The provinces of Vienna and the smaller Lower Austria were separated from the federal state and became political strongholds for the SDAP (predecessor party of the SPÖ) as well as for the CS (predecessor party of the ÖVP).