As Giessen ring is the ring of federal roads and highways designated that the Central Hessian city casting leads.

Overpass of the A 480 at Nordkreuz

The Gießener Ring stretches over the A 485 from the Gießener Nordkreuz to the Bergwerkswald junction, which is built like a motorway triangle , from there it runs as the B 49 in the direction of Wetzlar over the Kleinlinden viaduct to the so-called Lahnfeld triangle . There the ring leads to the B 429 to Wettenberg , where the last part leads back to the Gießener Nordkreuz via the A 480 .

While the federal road 49 only partially belongs to the Gießener Ring and is also of great national importance, the other parts are almost exclusively restricted to the ring. The B 429 is the only street that belongs completely to the Gießener Ring. However, in the past it led to Limburg; this section was rededicated to the B 49.

The two sections of the freeway were part of the abandoned plans for freeways 48 and 49 . The A 480 begins shortly before the Wettenberg junction and continues outside the Gießener Ring to the nearby Reiskirchen and the A 5 . In addition, there is a small part of the abandoned route around the Wetzlarer Kreuz , but it is only very rarely used. The A 485 is an expanded section of the planned north-south route A 49. It replaces the entire length of the B 3 and is largely part of the Gießener Ring. It joins the federal highway 3 to Marburg or Butzbach directly at the Gießener Nordkreuz and a few kilometers after the Bergwerkswald triangle near Langgöns .

With the exception of the connection from the B 429 to the A 480, the federal highways are all completely motorway-like . At AS Wettenberg, there is only a plan-free driveway onto the motorway in the direction of Reiskirchen from the B 429 leading north . The other connections are implemented as normal junction with traffic lights .

Via the ring you can reach the B 49 to Limburg or the B 3 to Butzbach in the south or Marburg in the north. In addition, the A 5 ( Frankfurt , Kassel ) and the A 45 to Hanau or Dortmund are in the immediate vicinity. They can be reached via the individual sections outside the Gießener Ring. 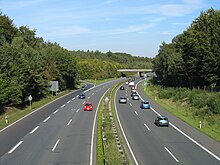 A 485 with a view of the Bergwerkswald triangle

Another junction is planned for the future between the Bergwerkswald triangle and AS Schiffenberger Tal. It would at the L 3130 near the Lindener are district Oberhof and is during rush hour relieve the other connection points. At the Kleinlinden junction in particular, there are always dangerous backwater jams that extend as far as the Gießener Ring and represent a high risk of accidents. Alternative traffic attempts to relieve the junction did not show the desired success. However, it is unlikely that it will be implemented in the near future, since the construction of a new junction primarily requires an improvement for the supra-regional traffic. A further access on the A 485 would rather burden the flow of long-distance traffic.

The Gießener Ring was completed on November 19, 1979 with the construction of the southern bypass and cost 317 million DM . Further costs arose in the following years from subsidence of the road surface and several landslides. In particular, nature conservationists criticized the building because of the large amount of land required and the impairment of the nature reserves Bergwerkswald and Hangelstein.

For years there was also discussion about the closure of the former makeshift exit Grünberger Straße, which leads the ring northwards directly onto federal highway 49 towards Reiskirchen. However, this has not been done because this exit is particularly important for heavy goods traffic and the alternative route via Ursulum is not designed for this. An upgrade to a full-fledged junction proposed by the city of Gießen cannot be approved for technical reasons.