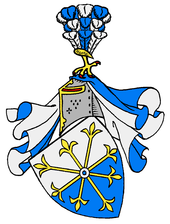 Family coat of arms of the Greiffenclau family

Greiffenclau (also Greiffenklau or Greiffenclau zu Vollraths ) is the family name of a noble family from the Rheingau in today's Hesse . The von Greiffenclau family originally come from Lorraine .

The main line of the family Greiffenclau can be according to legend, to the time of Charlemagne traced under which the Greiffenclaus as Ministeriale to have served. On his travels from the Palatinate to the Palatinate, Charlemagne recognized, according to a legend, when he stayed for a long time on his Ingelheim Palatinate , that the snow on the southern slopes of the opposite bank of the Rhine in the Rheingau first melted and ordered wine to be grown there. The Greiffenclaus moved to the Rheingau side and built the Gray House in Winkel . 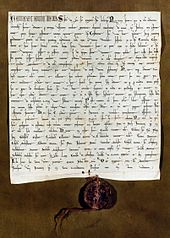 The oldest wine bill from 1211

A first representative of the family is mentioned in 1097. According to recent research, the Gray House in Winkel was built around 1075 and is one of the oldest Romanesque secular buildings in Germany. The Greiffenclau are considered to be one of the oldest families in Europe who were involved in viticulture , because according to a document from 1211, which is considered the oldest wine bill , the family sold wine produced there to a monastery. Only the Antinori family in Florence can prove an even older winemaking tradition.

From 1320 to 1997, Vollrads Castle was the family seat, where wine was also grown. In the Höchst old town there is a Greiffenclausches house that came to the family in the 17th or 18th century. In 1664 the family was raised to the status of imperial baron and in 1674 they were awarded the court office of an inherited meal of the Electorate of Mainz .

The family provided one elector-archbishop each from Trier and Mainz and two prince-bishops from Würzburg. Richard von Greiffenklau zu Vollrads was Archbishop and Elector of Trier from 1511 to 1531. He anointed Charles V as German Emperor, presided over the Reichstag in Worms and founded the pilgrimage to the Holy Rock . Even Georg Friedrich von Greiffenklau , who served as Elector Archbishop of Mainz from 1626 to 1629, was closely connected to the House of Habsburg , he designed for Emperor Ferdinand II. The 1629 enacted Edict of Restitution , which the Thirty Years' War affected. Maria Ursula von Greiffenclau zu Vollraths married Philipp Erwein von Schönborn in 1635 , the brother of the Archbishop of Mainz Johann Philipp von Schönborn . The marriage resulted in 12 children, including Lothar Franz von Schönborn , who became Prince-Bishop of Bamberg in 1693 and Archbishop of Mainz in 1695. When in 1699 he wanted to become Prince-Bishop of Würzburg with the support of the Emperor, his cousin Johann Philipp von Greiffenclau zu Vollraths prevailed; he held office until his death in 1719. During the “Greiffenclau time” he developed a brisk construction activity in Würzburg. From 1705 he had Gereuth Castle built as a baroque country seat on a privately acquired estate , which the Greiffenclaus inherited and sold in 1815. Johann Philipp's nephew Karl Philipp von Greiffenclau zu Vollrads was elected Prince-Bishop of Würzburg 30 years after the death of his uncle and was in office from 1749 to 1754. The former rector of the University of Mainz promoted the Würzburg University. He had the Würzburg residence completed by Balthasar Neumann .

The family coat of arms of Greiffenclau zu Vollrath shows a golden Glevenrad (a silver ring with a star-shaped set of eight golden lily sceptres on the outside) in a field divided in silver and blue. The increased coat of arms also shows the silver oblique left bar in the black field of the Ippelbrunn rulership, which is shown by Siebmacher as a right diagonal bar, as the entire coat of arms is facing inwards. On the helmet with blue-silver covers as a talking helmet ornament, a red-armored golden griffin leg (" griffin claw"), at the cut with a bush of 13 (5: 5: 3) alternately decorated with silver and blue ostrich feathers.

Shield holders are among other things in an old coat of arms relief at Vollrads Castle , also at Gereuth Castle , two griffins.

Many important personalities, including Archbishops and Electors of Mainz and Trier and Prince-Bishops of Würzburg, emerged from the Greiffenclau-Vollraths family, for example: