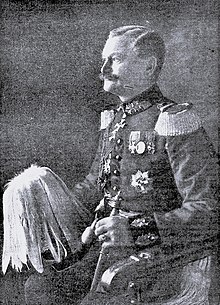 He came from one of the Erkelenz council families for centuries , whose nobility had been ruled for a long time and was recognized by the Prussian king on June 11, 1838 , and was the son of Joseph von Oidtman (1798–1877) and his wife Caroline, née Freiin von Eberstein (1809 -1862). His father was most recently a Prussian major in the Rhenish Uhlan Regiment No. 7 in Saarbrücken .

Oidtman received a humanistic upbringing and moved into the Berlin Cadet House in February 1871 . On October 18, 1871, he was referred to the 4th Guards Grenadier Regiment "Queen" of the Prussian Army in Koblenz as a characterized porter ensign. On June 11, 1872 he received the patent for this rank and was promoted to second lieutenant on October 16, 1873 . From June 1877 to the end of March 1881, Oidtman was a company officer at the NCO school in Jülich . After returning to his regiment, he was on 1 October 1882 aides appointed the II. Battalion and in this position on July 7, 1883, for the first lieutenant promoted. This was followed from October 1, 1884, as an inspection officer and teacher at the war school in Metz and a command at the war academy . With the promotion to captain he was appointed company commander on September 15, 1888 . Oidtman commanded the 3rd, then the 14th Company. With his promotion to major on September 1, 1896 , he was aggregated into his regiment . It was not until the following year that he was appointed battalion commander and as such was assigned to the 2nd battalion on April 1, 1898.

In 1902 he was transferred to Charlottenburg to the staff of the Queen Elisabeth Guard Grenadier Regiment No. 3 and was promoted to lieutenant colonel on March 22, 1903 . On January 27, 1906, Oidtman was commissioned to lead the infantry regiment "Lübeck" (3rd Hanseatic) No. 162 and on February 13, 1906, he was appointed regimental commander with promotion to colonel . As major general he commanded the command of the 81st Infantry Brigade in Lübeck from March 22, 1910 . With the approval of his resignation application on January 17, 1912 with the statutory pension , he was put up for disposition and given the character of Lieutenant General .

With the outbreak of the First World War it was reused and Oidtman acted from August 2 to October 1, 1914 as the commander of the 42nd Reserve Infantry Brigade.

After the end of the war, he retired and settled in Wiesbaden.

From a young age he worked regularly in the West German Society for Family Studies (WGfF), where he also published genealogical articles. In 1922 Ernst von Oidtman was appointed honorary chairman of the WGfF. In the same year, the University of Cologne appointed him an honorary doctorate in philosophy because of his extensive family research . In gratitude, Oidtman bequeathed his extensive collection of Rhenish families (1,333 folders from various families) to the University of Cologne. The “Ernst von Oidtman Collection” has been available in 18-volume book form since 1991. Oidtman's more than 280 family history publications from 1875–1936 as well as his own ancestry are listed in the first volume of this series. The original of the Oidtman lineage, which Ernst von Oidtman wrote by hand, is still in the family's possession.