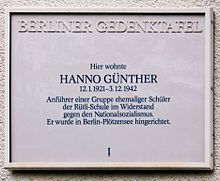 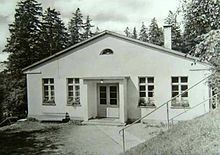 From Easter 1928 Hanno Günther attended the most famous reform elementary school at the time , the Rütli School in Berlin-Neukölln , where his mother Maria Menzel was a teacher. After the school was closed by the National Socialists in 1933, he went to the island of Scharfenberg in 1934 , where he visited the school farm in the hope of being able to take his Abitur there. But the following year he was expelled from school.

During his professional training as a baker with Ernst Grüger, the husband of Klara Grüger , Günther came into contact with a communist resistance group around Elisabeth Pungs . After the invasion of Poland in 1939, he used her to distribute the first leaflets that were distributed in hallways and mailboxes. After the attack on France , from July 1940 to January 1941, Günther and Elisabeth Pungs and his former schoolmate Wolfgang Pander , a young communist of Jewish origin, created the pamphlet “The Free Word”, some of which was sent by post. In the writing, the resistance fighters called for resistance and sabotage against National Socialism , sometimes in rhyming form, in general and in particular for armaments workers , called for peace and freedom of expression and distributed news about the war situation. "The free word" was signed with "German Peace Front".

Hanno Günther later founded a small resistance cell with former schoolmates from the Rütli School , which regularly held readings of Marxist writings and maintained contacts with the communist resistance , including the KPD functionary Herbert Bochow .

On July 28, 1941, the Gestapo succeeded in breaking up the resistance cell. Hanno Günther was arrested with his friends Dagmar Petersen , Emmerich Schaper , Wolfgang Pander and Bernhard Sikorski . After sometimes brutal interrogations, the group was tried at the People's Court on October 9, 1942 , Dagmar Petersen was sentenced to seven years in prison , all other defendants were sentenced to death . Emmerich Schaper died before his execution as a result of the interrogations. Hanno Günther and the other six of his friends were executed in Plötzensee in early December 1942 . His grave is in the south-west cemetery Stahnsdorf .

Memorial plaque on the island of Scharfenberg, in Berlin-Tegel

In the GDR , Grenzregiment 34 in Groß Glienicke , Straßen as well as a number of schools, (children's or youth) homes and the youth hostel in Geising were named after Hanno Günther, including the Hanno Günther primary school in Waldheim in Saxony or the regional one Ferdinandshof school, which still bears his name today.

In addition, a torpedo speedboat of the Volksmarine carried this name from 1961 until it was decommissioned on October 14, 1968. A feeder trawler with the fishing identification number ROS 403 of the "Artur Becker" series also got its name.

A memorial plaque in Onkel-Bräsig-Straße 108 (December 3, 1989), which belongs to the Berlin Hufeisensiedlung in Berlin-Britz , commemorates Hanno Günther, and another plaque commemorating him and the communist resistance fighter against National Socialism, Hans Coppi , is on the island of Scharfenberg.