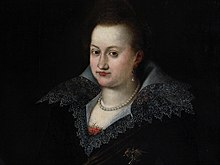 Hedwig of Denmark, Electress of Saxony

Hedwig was the youngest daughter of King Frederick II of Denmark and Norway and Sophie of Mecklenburg . The Copenhagen court was famous for its high culture and festivals at that time, Hedwig's parents loved and promoted music and theater. After the death of her father in 1588, her mother initially took over the government for her eldest son Christian IV. Duchies of Schleswig and Holstein . The constant conflict with the Danish Imperial Council and the governor of the duchies, Heinrich Rantzau , led to Christian IV being declared of legal age in 1593 at the age of 15 and his mother being deported to the castle in Nykøbing ( Falster ).

Hedwig grew up with the younger of her siblings on her mother's widow's residence and at the court of her grandfather Ulrich von Mecklenburg , whose mother was her only child. She also often accompanied her mother on trips to other relatives. Not much is known about her upbringing, but it can be assumed that her mother, who was interested and educated in many ways, did not neglect her daughters. She learned several languages, Danish, German, French and probably also Latin. She also took part in courtly events, such as the weddings of her older sisters Anna with the English King Jakob I in 1589 and Elisabeth with Heinrich Julius von Braunschweig-Wolfenbüttel in 1590 and her brother's coronation in 1596 and his wedding in 1597.

Her mother and grandfather agreed to marry Elector Christian II of Saxony without the participation of the Danish Imperial Council. It took place in September 1602 in Dresden . The family connection with the Danish and English royal families cost the elector an unusually high marriage allowance of 75,000 Reichstalers and the arrangement of an exceptionally splendid wedding. The wedding ceremony was held by the court preacher, Polykarp Leyser the Elder .

Hedwig also traveled a lot during her marriage and widowhood in order to maintain family contacts. She promoted church and culture at the Electoral Saxon court and introduced the Danish festival culture there.

Her husband died on June 23, 1611 after a tournament. Hedwig then moved to her widow's residence at Schloss Lichtenburg near Prettin and remained unmarried until the end of her life. From 1611 to 1641 she administered the offices of Annaburg , Schweinitz (with Prettin and Lichtenburg), Seyda and Schlieben , and even had a small army at her disposal, as her brother-in-law, Elector Johann Georg I of Saxony , a squadron of dragoons and a section of infantry left as an honor guard.

By trading in salt, she was able to maintain her court even in difficult times and support her subjects. She took care of churches and schools in her Wittum , had a church built in the village of Hohndorf (near Prettin), and fundamentally renewed the church of St. Peter and Paul in Labrun . In 1624 it added to an old, electoral foundation to supply the 33 parishes belonging to it with communion wine. This Hedwig Foundation still exists today.

Hedwig fed the hungry during the Thirty Years' War and set up plague hospitals, cracked down on drinkers and gamblers, wrote out fronds to dike the Elbe and subjugated opposing communities by billeting dragoons. She managed to obtain letters of protection for her castle and land. The Swedish commander-in-chief Johan Banér even sent her an honor guard of a hundred horses. Nevertheless, the war also led to destruction in the villages of their Wittum.

As a widow, she also used her diverse contacts on a political level. She supported her brother, the Danish King Christian IV, also through skillful diplomacy and brokered marriages in order to strengthen political connections, including the wedding of her nephew, Crown Prince Christian of Denmark , to Magdalena Sibylle of Saxony , the niece of her deceased husband . Even childless, she brought up several orphaned children of the relatives at her castle, including Anna Maria von Mecklenburg .

Hedwig was musical, played several instruments and ran a court orchestra. She collected clocks and paintings, some of which she commissioned herself, and set up a large library. She promoted young talents in various fields, which she placed at the Saxon or Danish court. She was in close contact with the Dresden conductor Heinrich Schütz . He dedicated some of his spiritual works to her. Even Michael Praetorius was supported by her. She also traveled a lot during the war years. She enjoyed visiting the Glücksburg hunting lodge , for whose menagerie her brother gave her two lions and a tiger.

On July 9, 1630, she became a member of the Tugendliche Gesellschaft , the female counterpart of the Fruitful Society for the promotion of the German language and literature, under the name of “The Greatest” .

Hedwig died in 1641 at her Lichtenburg Castle and was buried in Freiberg Cathedral .

Thanks to family marriages, King Friedrich I of Denmark and his wife Anna of Brandenburg are two great-grandparents of Hedwig.