Henri Cartier-Bresson (born August 22, 1908 in Chanteloup-en-Brie , Seine-et-Marne , France ; † August 3, 2004 in Montjustin , Provence ) was a French photographer , director , actor , draftsman , painter and co-founder of the photo agency Magnum . He became known for his artistic black and white photography. During the Second World War he escaped from German captivity twice and photographed the liberation of Paris .

Henri Cartier-Bresson grew up as the son of the wealthy family of a textile manufacturer in Normandy and Paris. There he attended the Lycée Condorcet without graduating. After studying painting with André Lhote in Paris from 1927 to 1928, he devoted himself to photography from 1930 . His first major reporting trip took him to Ivory Coast in 1931 . Recordings of his numerous travels quickly found a forum in magazines and at exhibitions. He gained experience in New York with Paul Strand . In 1937 he took photos of the coronation of George VI. in London. In the late summer of 1937, before the Battle of Belchite , he traveled to Spain with the former editor of New Theater magazine , Herbert Kline, and the cameraman Jacques Lemare to make a documentary about the American Medical Bureau during the Spanish Civil War . They were filming in the International Brigades Hospital (Villa Paz) in Saelices , near the Spanish capital. They traveled to the Valencia coast to film the recovery of the injured volunteers in the villas of Benicàssim . They also visited the Abraham Lincoln Brigade in Quinto near Saragossa and shot the film With the Abraham Lincoln Brigade in Spain . From 1937 to 1939 Cartier-Bresson was assistant director for three films by Jean Renoir , including The Rules of the Game, and made three documentaries himself “in the conviction that he did not have the imagination for a fictional work”. He illustrated his theory of photography of the “decisive moment” established in 1952 early on in his war reports. He described his approach to photography as follows:

“You approach quietly, even if it's a still life. You have to walk on velvet paws and have a sharp eye. [...] No flash, that goes without saying, out of consideration for the light, even when it's dark. Otherwise the photographer becomes unbearably aggressive. The craft is heavily dependent on the relationships you can establish with people. One word can spoil everything, all cramp up and shut up. " 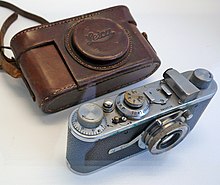 When taking photos, he attached great importance to the most perfect composition possible. The enlargement should then show the entire small picture negative , without subsequent cropping. Henri Cartier-Bresson mostly left the darkroom work to the Magnum agency laboratories; in particular, he worked with Pierre Gassmann for decades . He predominantly used the handy and inconspicuous 35 mm cameras of the Leica brand , which were equipped with a 50 mm standard lens in order to achieve an image effect that was as close as possible to the human perspective. Cartier-Bresson photographed in black and white because of the greater artistic effect he valued.

As sheltered as Henri Cartier-Bresson grew up, his eventful life confronted him with painful experiences - his own and those he documented in reports. In 1940 he was taken prisoner by Germany for almost three years. After two failed attempts to escape, he managed to make his way to Paris in 1943. There he joined a group of photographers from the French Resistance who captured the time of the German occupation and the German withdrawal in pictures.

After it was mistakenly assumed that he had died in the war, the Museum of Modern Art in New York dedicated a large “posthumous” retrospective to Cartier-Bresson in 1947 . He made it clear that he was still alive and worked on the show. In the same year he founded the Magnum Photos agency in New York with Robert Capa , David Seymour and George Rodger , with the aim of leaving the photographer with the rights to their work.

He was spending 1948 in India when Mahatma Gandhi , with whom he had only spoken shortly before, was murdered. Cartier-Bresson later described this interview as a formative event in which Gandhi particularly noticed a photo that he associated with death. In 1949 he witnessed the emergence of the People's Republic of China and independence from Indonesia . His travels took him through Europe, Pakistan and the USA, and he was one of the first foreign photographers to visit the Soviet Union in 1954 after the start of the Cold War . In 1963 he visited Mexico and Cuba .

Cartier-Bresson was the first photographer ever to exhibit in the Louvre in Paris in 1955 . His photographs have been collected and published in Images à la sauvette (1952, pictures in passing ), D'une Chine à l'autre (1968, China yesterday and today ) and Moscou (1955, Moscow ). In 1972 Cartier-Bresson stopped professional photography and devoted himself intensively to the art of drawing. In 1974 he was elected to the American Academy of Arts and Sciences .

In 1977, photographic works by Henri Cartier-Bresson were shown at documenta 6 in Kassel in the photography department , which presented the connection to contemporary art in the context of “ 150 years of photography ”.

In 2003, Who Are You, Henri Cartier-Bresson? (original: De qui s'agit-il? ) with a comprehensive overview of his photographic work.

In the spring of 2003, Cartier-Bresson and his wife Martine Franck founded the Fondation Henri-Cartier-Bresson . His work is archived in a house in the Paris district of Montparnasse , but works by other artists are also shown in the exhibition rooms. The last exhibition of his works during his lifetime was the major retrospective in Berlin's Martin-Gropius-Bau .

Henri Cartier-Bresson died in 2004 at the age of 95 and was buried in the Montjustin Cemetery. The French President Jacques Chirac praised Cartier-Bresson "as a brilliant photographer and one of the most talented artists of his generation."

From 1937 to 1967 he was married to the Java dancer Ratna Mohini and his second marriage from 1970 to his death with the Belgian photographer Martine Franck . The daughter Mélanie (* 1972) comes from the latter marriage.

Quote from Arthur Miller : “The moment Cartier-Bresson pulls the shutter button is the moment when hope and despair collide and one illuminates the other. The pathos of his pictures arises from this clash. And what can be instinctively recognized in this moment is that wonderful belief that is inherent in every art somewhere. "

The painting of Cubism , the philosophy of Zen and surrealism around André Breton had an influence on Henri Cartier-Bresson's work .

"A good photo is a photo that you look at for more than a second."