Heraeus is a German technology group with a focus on precious and special metals, medical technology , quartz glass , sensors and specialty light sources. The company was founded in Hanau in 1851 and is one of the largest family businesses in Germany in terms of turnover .

In the ranking of the 1000 largest family businesses in Germany by the Wirtschaftsblatt magazine , the company ranks eleventh. 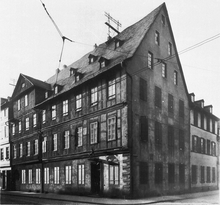 In 1851, at the age of 24 , the pharmacist and chemist Wilhelm Carl Heraeus took over his father's unicorn pharmacy in Hanau, which had been owned by the Heraeus family as the count's court pharmacy since 1660. Wilhelm Carl Heraeus thus laid the foundation stone for the family company. Hanau was a goldsmith town where platinum had been used to make jewelry since the end of the 18th century . However, the precious metal was extremely difficult to work with for the goldsmiths of that time, as it is extremely tough and the melting point is 1770 degrees Celsius. As long as there was no smelting process, platinum could therefore only be processed in complex white-hot forging processes.

Wilhelm Carl Heraeus had studied chemistry and pharmacy and knew about the problem of goldsmiths. After experiments, he succeeded for the first time in 1856 in using a self-developed oxyhydrogen blower burner to melt platinum in large quantities and to obtain it in a highly pure form. Although it was already known that platinum melts in an oxyhydrogen flame - a mixture of hydrogen and oxygen - this was only possible in small quantities in the laboratory. With its gas blower apparatus, Heraeus was able to generate sufficient oxyhydrogen and melt several kilograms of platinum-containing materials with a correspondingly large flame front.

On the basis of this pioneering achievement, Heraeus founded the “First German Platinum Smelter WC Heraeus”. His company's customers included goldsmiths and jewelry factories all over the world, but also tooth factories, chemical laboratories and other branches of industry. In 1857 WC Heraeus produced around 30 kilograms of pure platinum, and in 1896 more than 1,000 kilograms of platinum were melted and processed.

Crucible made of platinum and quartz glass

The focus of production continued to be platinum, which was used for ever new areas of application due to its chemical and physical properties. Because of its resistance to acids and heat, platinum was used, among other things, for scientific devices, pots and dishes in chemistry and physics. In addition, the precious metal was already being used in the 19th century for holding pins to fix artificial teeth . Even light wires in bulbs and non-corrosive electrical contacts in telephones were made of platinum. Due to the steady growth of the company, a move was necessary. In 1896, the platinum smelter WC Heraeus and 40 employees moved into the new factory outside Hanau.

Two years later the two sons of the company founder, Wilhelm and Heinrich Heraeus, took over the management. They pushed research and development forward and brought a former school friend, the physicist and chemist Richard Küch , into the company. Küch, who was managing director from 1909, was in close contact with science and continued to conduct basic research, which was decisive for the further growth of the company. Among other things, he developed a process in which quartz glass could be obtained by melting rock crystal at around 2000 ° C. This almost bubble-free quartz glass was of the highest purity and is still a valued material in medicine and industry because it is translucent as well as temperature and acid stable.

During this period, the former platinum smelter grew into one of the most important companies of its kind. With the advent of ceramic paints, platinum products were increasingly required for manufacture and Heraeus supplied the electrochemical and plastics industries. The real boom in platinum processing began at the beginning of the 20th century, as the chemical industry required large quantities of platinum thermocouples and platinum-rhodium catalysts for the production of nitric acid.

With Wilhelm Heinrich Heraeus and his cousin Reinhard Heraeus, the third generation took over the management of the company for almost 40 years from 1927. During this epoch, Heraeus implemented new physical knowledge - for example in the manufacture of the first dental alloys. The company thus continuously developed into a multi-product company.

An important technical innovation of the 1920s came from the Heraeus company: the melting of metallic materials under vacuum. For a short time Heraeus owned an independent company in this area, Heraeus Vakuumschmelze, which registered 84 German patents within ten years. But there were also setbacks. Due to the First World War , inflation and the collapse of the precious metal market in Russia, the price of platinum was subject to extreme fluctuations. At Heraeus, research activities were therefore primarily geared towards recycling techniques and, at the same time, an attempt was made to find suitable materials to replace precious metals.

Regardless of these external problems, the company grew steadily and in 1939 employed around 1,000 people who achieved annual sales of 20 million marks. With the outbreak of World War II , numerous employees were drafted into the military. The group employed 1,500 forced laborers from the Hanau civilian labor camp, a fact that was not mentioned in the company's history on the company's website. Production shifted to products such as electrical contacts in a precious metal-saving design, catalysts and rhodium mirrors for FLAK headlights . In air raids in 1944 and 1945, the city of Hanau, and with it the company's facilities, were almost completely destroyed.

In the years of reconstruction , the main focus was on the manufacture of proven products and the expansion of new production areas. The basis for internationalization and the foray into foreign markets had already been created by the company founder before the turn of the century. The group was able to fall back on these contacts in the post-war period. B. win the American market for sales of optical quartz glass.

From 1958 the group founded its first foreign sales companies in France and Italy, and from 1972 subsidiaries and international holdings followed. New quartz glass plants were founded in Japan and the USA, followed by production facilities in Korea and the Philippines for contacting wires made of high-purity gold for semiconductor components, so-called bond wires . In 1970 Helmut Gruber, a well-known physicist in the field of metal science, took over the management of the company as well as the group-wide responsibility for the technology department. He promoted activities in the areas of quartz glass, precious metal chemistry and special metals as well as the establishment of subsidiaries abroad. For the first time in 1979 sales abroad were higher than domestic sales.

Heraeus was a leading supplier of devices for mask production and ceramic housings for computer chips for the GDR . 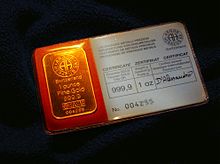 One troy ounce of gold, stamped by Heraeus

Jürgen Heraeus , son of Reinhard Heraeus and member of the management board since 1970, took over the management of the company from 1983 to 2000 in the fourth generation. Internationalization was intensified under his leadership. The prerequisites for this were created through a profound reorganization of the company and modern management structures.

After the founding of Heraeus Holding in 1985, extensive decentralization followed in 1990. For this purpose, the core work areas precious metals, dental materials, quartz glass, sensors and medical technology were converted into five decentralized, independent management companies under the umbrella of the Management Holding . The group expanded primarily in the Asian economic area. In addition, strategic competitive positions were filled, e. B. through the acquisition of Electro-Nite. The group's sales and operating result reached the size of a global group of companies, and in 2001, 74 percent of product sales were generated outside Germany for the first time.

In 2001 the Heraeus Group celebrated its 150th anniversary. In order to use the synergy potential of the various group companies, the focus was on the core business. For this purpose, Heraeus Noblelight was set up in 2001 as an independent operational management company. Heraeus Med was sold in 2002, as was the shares in Kendro Laboratory Products. In contrast, the Heraeus Group increased its involvement in the industrial precious metals sector: WC Heraeus expanded the thin film technology / thin film materials sector. The bond wire activities in China were expanded and a joint venture was established in South Africa in the precious metal chemicals sector, which was soon converted into a subsidiary. With the acquisition of the Swiss Metalor Medical Division, the company further expanded its activities in medical technology.

From 2009, the WC Heraeus division was split into the new Heraeus Precious Metals and Heraeus Materials Technology divisions. In the summer of 2013, Heraeus sold the dental products division to the Japanese chemicals group Mitsui . Heraeus Holding now has six business units.

In March 2017, Heraeus sold its sputter target division to the American Materion Corporation for 30 million euros . In April 2017, Heraeus took over the Swiss competitor Argor-Heraeus (formerly Argor SA), in which the company had been involved since 1986.

In October 2018, Heraeus expanded its sales channels in Germany and, in cooperation with the precious metal dealer Ophirum GmbH, opened the online platform Heraeus-Gold.de for the purchase of Heraeus precious metal bars and coins from various mints for private customers.