Hominid is published as a separate book publication narrative of Austrian author Klaus Ebner , published in October 2008 in Vienna FZA Verlag and as an extended edition in 2016 in Klagenfurt Wieser Verlag.

Hominid plays millions of years ago in Central Africa , in the transition area between tropical rainforest and savannah . The characters involved are Australophithecine afarenses and are thus on a stage of development before tool use and fire . Pitar, who appears as a first-person narrator , reflects on his environment in seven chapters and decides to lead his clan on the way to civilization : »So I decided to bring a little clarity into the dark, to light a candle for my people, according to the motto, there will be light and so on. « His language skills, reflections and speeches correspond to those of a modern person, especially since they are based on the knowledge of a contemporary about history , politics , philosophy and literature . Temporary aside remarks from Pitar that an idea or a certain object has not yet been invented or developed add to the comedy of the grotesque scenery.

Convincing the members of the hominin clan of the usefulness of completely new activities turns out to be laborious. Nevertheless, Pitar manages to get the patriarchal leader of the clan, Costello, to his side. Against this background, Costello's rivalry grows with Re, who begins to dispute the females and his leadership role with the previous alpha male . Pitar's confidants are Carpediem, who stands out for his Latin sayings, in part quoting ancient authors, and Lao , who draws on Chinese philosophy . Gradually, windshields are erected and the members of the clan spend less time in the trees and more often on the ground, where they are, however, exposed to greater dangers from predators . In view of the burgeoning dispute over the leadership, Pitar tries to set up a kind of parliament to settle differences of opinion . While Costello recognizes parliament as a forum for his self-expression and consolidation of his power and quotes from famous speeches by Winston Churchill and Abraham Lincoln , the other clan members boycott the idea through a lack of discipline and openly displayed lack of interest.

Embedded in the plot is a love story that unfolds between Pitar and Maluma. Maluma is one of those female clan members whom Costello regards as his very own harem . By the time she turns to Pitar, she has obviously broken ties with Costello. Scenes of the commonality between Maluma and Pitar are at the beginning of the text as well as at the end, and they break through the sequence of the actual narrative several times; this love story is told in all chapters with an odd number. In her review, the author Karin Gayer speaks of the fact that the love story between Pitar and Maluma and their positioning in the text result in a "second interpretation of beginning and end."

The narrative consists of seven chapters, labeled "Day 1" to "Day 7". Based on the biblical days of the creation story, the protagonists present new insights and creations in each chapter. On the seventh day, everyone is exhausted and a rest is called for. In contrast to the biblical account, this calm is destroyed by the attack of a saber-toothed cat . Several members of the clan are killed, including Costello, whereby the leadership falls to the violent Re. Pitar and Maluma decide to leave the clan; The book says: "We should get away in time, from Re and his new empire, which, if I factored in Thorn's previous rule, was the third here." Pitar and Maluma set off for the savannah. The final sequence alludes to the biblical expulsion from paradise and the out-of-Africa theory .

In an author talk with the Vienna regional director of the Arovell publishing house, the author deciphered the names of the characters.

The idea of ​​equipping early humans with today's knowledge and a modern language came up in mid-2006. However, since the author did not consider the material to be suitable for a longer novel, it was initially not developed. The impetus for today's story was the award of the Vienna Workshop Prize in February 2008. Part of the prize consisted of an independent book publication by FZA-Verlag, which was limited to 100 pages by the publisher. Ebner completed the narrative for this purpose and published the book in October of the same year. FZA-Verlag presented the work as part of an author reading in Vienna. 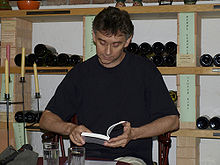 The author at a reading

Heinz Gerstinger describes the book as a "story of the awakening of the human spirit". The author lets the event slide through »gentle irony into playfulness«. Several reviewers put the ironic and satirical aspect of the narrative at the center of their reviews. The names of the protagonists, Latin quotations and idioms used today contribute to this, as does the parallelism of the seven days of creation and the Incarnation . Ingrid Reichel also sees the publication date of the book as fitting the 150th birthday of Darwin's theory of evolution . Analogous to the statements in reviews of other books by the author, it points to the sophisticated and detailed language, which is "mixed with a sensitive and fine humor".

The numerous foreign-language phrases, primarily Latin, remain untranslated in the first edition . Ingrid Reichel therefore asks the publisher in her review to add a corresponding glossary to a new edition. The author published such a glossary online on his website.

Despite the clear allusions to several world religions , most clearly Judaism and Christianity , Ingrid Reichel writes in her review that the story is »for thinkers (...), for Darwinists, by no means for creationists, less for believers, more for atheists «Own. Karin Gayer shows another aspect when she refers to the parallelism of the society described with the patriarchically dominated hierarchy of a chimpanzee pack and to the social matriarchy evoked in the book, which is similar to today's bonobos . She also emphasizes the strong role women play in the narrative. With reference to the aforementioned parallelism, she writes: “On another level, the constant confusion and intermingling of apes and humans is striking, an amalgamation that makes you thoughtful and asks the reader the sometimes justified question of where we, who we are for hold double sapiens, should actually classify us. "