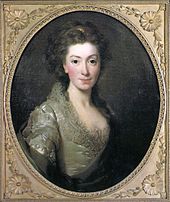 Izabela Dorota Fortunata Czartoryska b. Countess von Flemming (also Isabella ; born March 3, 1746 in Warsaw ; † June 17, 1835 in Wysock ) was a Polish aristocrat on her father's side from the German noble family of the von Flemming family . She was the wife of Prince Czartoryski , head of one of the wealthiest and politically influential families in Poland.

She worked as a writer, philanthropist , patron , salonnière and art collector and founded the collections of the later Czartoryski Museum , the first Polish national museum . She became a patriot in Poland's striving for independence from Russia and after the failed November uprising of 1830 went into exile with her family. 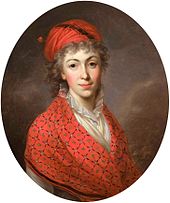 Isabella was a daughter of the treasurer of Lithuania, Count Georg Detlev von Flemming , from the Pomeranian noble family Flemming and his wife, Princess Antonina Czartoryska . Since her mother died soon after the birth, she grew up at the court of her maternal grandmother in Warsaw and in Wolhynia in eastern Poland . On November 18, 1761, at the age of fifteen, she was married to her cousin, Prince Adam Kazimierz Czartoryski , in Wołczyn , to whom she, as the sole heir of her father, made a large fortune in 1771. The marriage had six children (see below).

With her husband she made extensive trips through Germany, France, Italy and England. In 1772 she met Benjamin Franklin , one of the leaders of the American Revolution , and the French philosophers Jean-Jacques Rousseau and Voltaire in Paris . She developed a keen interest in literature and art as well as in gardening, the latter stimulated by her encounter with Jacques Delille and his work Les jardins, ou l'art d'embellir les paysages . From 1771 she laid out a sentimental-romantic landscape garden on her country estate Powązki , which was completely destroyed by Russian troops in 1794 in connection with the suppression of the uprising under Tadeusz Kościuszko and never rebuilt.

Even though the family lived mainly in Warsaw in the Blue Palace , the princess and her husband made the summer residence in Puławy a meeting place for intellectuals and politicians from 1775 onwards. She discovered the talent of the young painter Aleksander Orłowski and financed him. She adored William Shakespeare and amassed one of the largest private libraries in Poland. She herself wrote numerous unpublished works such as poems, memoirs and travel notes, but also several books that were published several times.

Even if they have a long-standing relationship with the Russian ambassador Nicholas Repnin talked, she made with her husband Pulawy in the 1780s to a focus of the magna-Nazi, from enlightened Sarmatism marked opposition to the political approach of the Polish king, Stanislaus II. August Poniatowski on Russia. When her husband considered emigrating to England or France because of the uncertain political developments in Poland, she refused; In her self-portrait, she described the deep connection with her country as a feeling that is paramount . In 1784 they united the Polish patriots after their sons Adam Jerzy and Konstanty Adam had been taken as political hostages by Tsarina Catherine of Russia after the Kościuszko uprising . From 1789 to 1791 she went on an educational trip through England and Scotland with her son Adam Jerzy, during which they not only visited country estates and gardens, but also factories, factories and mines as well as the industrial cities of Birmingham, Liverpool and Manchester. The last two partitions of Poland in 1793 and 1795 were a major change in her biography. While she had previously devoted herself to the distractions of court life and the admiration of her admirers and lovers (including Armand Louis, Duc de Biron), in addition to the great influence of her family, the patriotic bond with Poland and the commitment to its independence were now in the foreground.

In 1796 she had the castle in Puławy, which was also destroyed, rebuilt and expanded it to include an English landscape park , the Puławy Garden , where in 1801 she set up the Temple of the Sibyl as a temple to remember the historical greatness of Poland, which had now lost its independence. It contained historically valuable objects from Polish families, including the royal casket with 73 treasures from various Polish kings. In the Gothic House she collected numerous historical and literary relics, including souvenirs of the freedom fighters Jeanne d'Arc , Wilhelm Tell and George Washington , as well as Turkish trophies from the Second Turkish Siege of Vienna . Influenced by romanticism , she acquired various objects of sentimental significance that symbolized the splendor and misery of human life, such as Shakespeare's chair, fragments of the alleged tomb of Romeo and Juliet in Verona , remains of the bones of El Cid and Jimena from the Burgos Cathedral , remains of the bones of Abelard and Heloisa as well as of Petrarch and his Laura and a fragment of Rousseau's skull . She wrote a catalog for the objects with numerous essays that put Polish culture in the context of European ideas. She also had elementary schools and factories built and wrote an education book for the rural population. About her trip to the Hirschberg Valley in Lower Silesia, where the 70-year-old stayed in Bad Warmbrunn for a cure in 1816 , she wrote a culturally and historically interesting travel diary in French, which was published in German in 2007.

Izabela Czartoryska left Puławy in the November uprising of 1831

In 1811 the Czartoryski couple transferred the Blue Palace in Warsaw to their youngest daughter Zofia and her husband, Count Stanisław Kostka Zamoyski, and moved entirely to the Puławy and Sieniawa manors . Prince Adam Kazimierz died in 1823. During the November Uprising of 1830, when the museum closed and all objects evacuated, Puławy Castle was a hospital for the wounded and a refuge for the patriots who fled. After the unfortunate outcome of the revolution, the Russians confiscated the property and set up a correctional home in the castle. The princess had to flee Puławy and retired to her daughter Maria Anna von Württemberg at Wysock Castle in the Habsburg ruled Galicia , where she died on June 17, 1835 at the age of 89.

Her son Adam Jerzy took the rescued parts of her collection from Puławy into exile in Paris, where they were kept in the Hôtel Lambert until they were reopened to the public as the Czartoryski Museum in Krakow in 1878 by her grandson Władysław Czartoryski . They can still be seen there today, including the most famous work The Lady with an Ermine by Leonardo da Vinci, which the Princess received as a gift from her son Adam Jerzy in 1800.