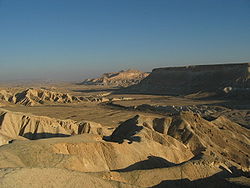 The Negev desert , in which the shooting took place

Jesus Christ Superstar is an American dramatic film musical directed by Norman Jewison from 1973 and a film adaptation of the rock opera of the same name by Andrew Lloyd Webber and Tim Rice . The plot is based on the Gospels and focuses on the conflict between Jesus and Judas in the last days before Christ's crucifixion .

The modern adaptation of the New Testament provoked heated discussions in religious circles at the time. The question arose whether Jesus could be portrayed in a rock opera in which he had a relationship with Mary Magdalene. Moreover, the film was partly as a satire or parody interpreted what information the staff, according to however is not the intention of the unusual staging.

The film received six Golden Globe and one Oscar nominations in the “Best Music” category, but won none of the awards.

See the Plot section of the Jesus Christ Superstar article

“Like the rock musical ' Godspell ', which was created at the same time, the rock opera is dominated by the end of the hippie era and the Jesus People movement. Norman Jewison staged the last seven days in the life of Jesus as a passion story shaped by a song cycle . The film was shot in the Negev desert in Israel , where a group of young people reenacted the stations in ancient ruins. Judas is interpreted as a tragic figure who understands Christian teaching as a drug . Photographed brilliantly by Douglas Slocombe. "

A backpack full of trouble | What this woman is up to | Don't send me flowers | With Madame Coco | Cincinnati Kid | The Russians are Coming! The Russians are Coming! | In the heat of the night | Thomas Crown is unbelievable | Gaily, Gaily | Anatevka | Jesus Christ Superstar | Rollerball | FIST - A man goes his way | ... and justice for all | Two close friends | Sergeant Waters - A Soldier's Tale | Agnes - Angel in Fire | Moonstruck | Back from Hell | Other people's money | Just for you | Bogus | Hurricane | The statement