This article is about the musician. For the music album see Joe Satriani (EP) . 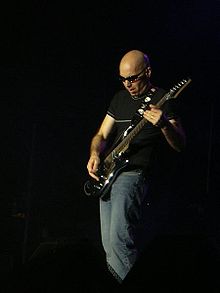 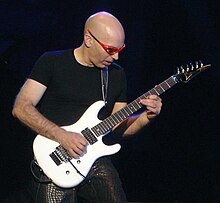 Satriani at the Musikmesse in Frankfurt (2004)

After Joe Satriani had read a report about Jimi Hendrix on the day of his death on September 18, 1970, he began, like Yngwie Malmsteen , to teach himself to play the guitar at the age of 15 . He also took brief lessons from jazz pianist Lennie Tristano . It gained its permanent place in the San Francisco music scene in the early 1980s. Satriani gave guitar lessons, including Kirk Hammett (later with Metallica ), Tom Morello ( Rage Against the Machine , Audioslave ), Larry "Ler" LaLonde ( Possessed and later with Primus ), Alex Skolnick ( Testament ) and Steve Vai , himself one of them currently best known guitarist. From December 1 to 8, 1993 and from June 2 to July 6, 1994 Satriani replaced Ritchie Blackmore on the The Battle Rages on tour at Deep Purple , but official recordings with the band were prevented by Satriani's existing record deal.

In Germany, Joe Satriani's song "Cryin '" became known to the general public through the Sat.1 program " Ran ", in which it was used as background music.

In 1996 Satriani initiated the all-star guitarist project G3 together with Steve Vai and a third guitarist who changed from year to year. The G3 project made 10 tours through Europe, the USA and Asia by 2016.

Together with the two ex-members of Van Halen , Sammy Hagar (vocals) and Michael Anthony (bass), and Chad Smith (drummer of the group Red Hot Chili Peppers ), Satriani founded the supergroup Chickenfoot . On June 5, 2009, they released their first album, Chickenfoot , which peaked at # 4 on the Billboard 200 . On September 23, 2011, the band's second studio album, Chickenfoot III , was released after the live album .

Satriani has been married to Rubina Satriani from Singapore since 1981 . They have the son ZZ (Zachariah Zane), to whom Joe Satriani dedicated ZZ's song on Crystal Planet 1998 as well as the co-authorship of three songs. Currently working as an artist.

Characteristic of his playing are both his very vocal melody lines and his solo passages, which are often characterized by his fast, fluid legato playing , as well as the virtuoso use of tapping . He obtains his sound material from different scales, whereby the Lydian and Mixolydian as well as the blue scales are the ones he uses most .

He often uses the compositional or improvisational concept of the pitch axis (German fundamental axis theory), where he plays different scales (modes) starting from the same fundamental tone (for example E-Mixolydian (mode with major third and minor seventh ) and then E- phrygisch (mode with minor third and less than a second)). He also often uses blues rock licks. He is also known for his frequent use of artificial overtones (also called: "pinch harmonics" / "artificial harmonics"), which are generated with a certain technique of the pick and thumb, which he then modulates with the tremolo .

In December 2008 Satriani filed a lawsuit against the band Coldplay for copying the chord progression, melody and dynamics of their song "Viva la vida" from his piece "If I Could Fly" (2004). In September 2009, both parties reached an out-of-court settlement.

Studio albums as a solo artist