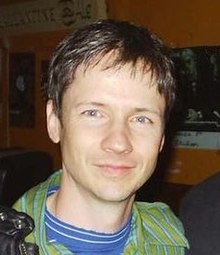 Mitchell, son of a general in the US Army and a Scottish mother, grew up on various army bases, including in Berlin ; later the family lived in Colorado Springs , Colorado , where he attended a Catholic school.

Since the mid-1980s he worked as a stage actor and director in New York City and played minor roles in television and film productions. Among other things, he directed a play by Tennessee Williams . From 1991 he appeared in the original Broadway production of Marsha Normans and Lucy Simons musical adaptation of The Secret Garden , which won several Tony Awards .

In the early 1990s, he and the musician Stephen Trask developed the character of Hedwig , a transgender rock musician who grew up in East Berlin , for appearances in the New York drag bar Squeezebox . This resulted in the successful off-Broadway musical Hedwig and the Angry Inch , which won two Obie Awards , and three years later the film version of the musical , again with himself in the title role. The film premiered at the 2001 Sundance Film Festival , where it won directors' and audience awards and the 2001 Lambda Literary Award . At the Chlotrudis Awards 2002 he won the award for best leading actor. At the 2001 Berlin International Film Festival ( Berlinale ) the film was shown in the "PANORAMA" section and won the Teddy Award .

In 2003 he produced the film Tarnation by Jonathan Caouette , which was recognized as best documentary by the US National Society of Film Critics . In 2004 Mitchell shot the music video for the Scissor Sisters' single Filthy / Gorgeous with stars of the New York drag scene . The clip was not shown on the American MTV because of its explicitly sexual representations .

His second film, Shortbus , premiered on May 20, 2006 at the 59th Cannes International Film Festival after two years of shooting . The North American premiere took place at the 31st Toronto International Film Festival in September 2006. The film, for the most part with amateur actors, whose script, including the numerous hardcore sex scenes contained in the film, was improvised together with the actors, is about the love life of a group of young New Yorkers. The film opened on October 19, 2006 in Germany.

In June 2009 Mitchell directed the movie Rabbit Hole for Fox Searchlight, starring Nicole Kidman and Aaron Eckhart . The drama is based on the play of the same name by David Lindsay-Abaire and focuses on a married couple whose child is killed in an accident. It premiered in September 2010 at the Toronto International Film Festival .

The openly gay Mitchell is also known in the United States for his advocacy for gay rights on TV talk shows such as Politically Incorrect .

As a director and writer