from Wikipedia, the free encyclopedia
This is the spotted version , flagged on May 7, 2020 . There is 1 pending change that has yet to be viewed.

Cologne triumvirate of the carnival session 2019/20: Jungfrau Griet, Prince Christian II and farmer Frank after the signing of the session contract in the Senate Hall of the historic town hall of Cologne .

Cologne triumvirate of the 2017/18 carnival session: Virgin Emma, ​​Prince Michael II and farmer Christoph after the signing of the session contract in the Senate Hall of Cologne's historic town hall

Cologne triumvirate of the carnival session 2016/72017: Prince Stefan I, farmer Andreas and virgin Stefanie after the signing of the session contract in the Senate Hall of the historical city hall of Cologne

Cologne three-star carnival session 2015/16: Jungfrau Johanna, Prince Thomas II and farmer Anton after the signing of the session contract in the Senate Hall of the historic town hall of Cologne

Cologne triumvirate of the carnival session 2014/15: Jungfrau Alexandra, Prince Holger I and farmer Michael after the signing of the session contract in the Senate Hall of the historic city hall of Cologne

Cologne triumvirate of the carnival session 2013/14: Jungfrau Hermia, Prince Björn I and farmer Michael during a visit to the historical archive of the city of Cologne . 2nd from left: Bettina Schmidt-Czaia , archive manager

The Cologne triumvirate of the 2012 session when the session contract was signed in the Senate Hall of the Historic City Hall of Cologne : Oliver von Rosenberg-Gruszczynski (“Virgin Olivia”), Marcus Gottschalk (“Prince Marcus II.”), Thorsten U. Schmidt (“Farmer Thorsten ")

The prince, the farmer and the maiden, who together form the Cologne triumvirate , are the official rulers over the foolish people and representative, citywide figurehead during a session of the Cologne Carnival . The triumvirate is also known as trifolium ("three-leaf", from Latin tres "three" and folium "leaf", botanically: clover (leaf) ). The performing persons are determined annually. 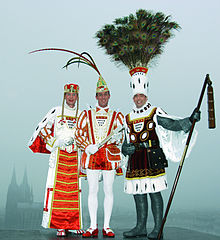 The Cologne triumvirate has existed as a unit since 1870, but has only been officially referred to as the "triumvirate" since 1938. Since the reform of the Cologne Carnival in 1823, the Held Carneval has been put at the head of the carnival. With the establishment of the German Empire in 1871, the hero became the prince carnival. At the beginning, the Princess Venetia was put to his side from time to time. This figure was rarely part of the Cologne Carnival and quickly disappeared. In the first few years, Bauer and Jungfrau only appeared in the Rose Monday procession if they could be integrated into the respective motto. The Cologne triumvirate is made up of the carnival associations , which are subordinate to the Cologne Carnival Festival Committee , and usually consists of members of a single society. In the applications, companies that celebrate an anniversary in the corresponding year are primarily considered. A new triumvirate is appointed every year for the carnival session. On Weiberfastnacht the street carnival opens at 11:11 a.m. on the Alter Markt and now on the Heumarkt in Cologne . The triumvirate is accompanied by the Prinzen-Garde Köln 1906 eV (escort corps of the Prince Carnival) and the EhrenGarde der Stadt Köln 1902 eV (escort corps of the Cologne farmer and the Cologne maiden) during the elevators and the Rose Monday procession .

"His madness", Prince Carnival, is the highest representative of the Cologne Carnival. The name replaced the name Held Carneval in the course of the 19th century . The prince or hero has been the most important figure in the Rose Monday procession since 1823 . At the proclamation (always at the beginning of January) by the mayor of Cologne, he receives the cot as a symbol that he swings over his foolish people. Prince Carnival always rides on the very last wagon on the Rose Monday procession, as the highlight of the foolish lindworm, so to speak. His car is the most magnificent and largest of the train.

The farmer (kölsch: Buur ), referred to as “his heartiness”, symbolizes the defensive strength of the old imperial city of Cologne . It goes back to a historical figure and thus particularly stands for the liberation of Cologne from the power of the archbishops in the battle of Worringen . As city keeper, he also wears the city key on his belt, which he receives from the mayor of Cologne when he is proclaimed. Furthermore, the Cologne farmer carries a flail in his left hand. On his mighty hat he wears 125 peacock feathers, which are supposed to represent the immortality of the city of Cologne. The figure refers to Cologne's imperial estate in the early modern period and goes back a long way into the history of the city. With regard to the carnival, the farmer, like the maiden , became established as an integral part of the 1870s.

The virgin, "your loveliness", is always portrayed by a man as the protective mother Colonia in the Cologne triumvirate, as the Cologne carnival used to be a purely male society. Only in 1938 and 1939 did the role have to be played by a woman on the instructions of the NSDAP . From 1872 onwards, the Cologne peasant was put to the side of the Cologne prince and maiden. For this reason, farmer and virgin always drive together on Shrove Monday in a splendid carriage. In order to do justice to the female role, a beard or a mustache is not allowed. The Cologne Virgin wears a crown that looks like a crenellated wreath (also called a wall crown). Her crown and her virginity symbolize the impregnability of the city of Cologne when it was still enclosed by a semicircular city wall. The Roman robe of the Virgin is reminiscent of the Roman Empress Agrippina the Younger , who, according to the annals of Tacitus, is considered the founder of the city of Cologne . At the proclamation, the Cologne virgin receives a silver mirror as a symbol. The mirror has only been given to the Virgin since 1993 when the proclamation was made, "so that she can control her beauty and charm". The symbol goes back to an idea by Mayor Norbert Burger , so that the virgin would not go away empty-handed when the prince received the cot and the farmer the city key.

Appearances of the Cologne triumvirate

Depending on the length of the session, the Cologne triumvirate has to complete up to 400 appearances. A good half of these appearances take place in social institutions such as nursing homes and children's homes, hospitals and hospices. The Bundeswehr and the tax office are also visited. Wherever the triumvirate appears, it is regularly received enthusiastically. It doesn't matter which person is in the respective role.

The triumvirate always comes up with an impressive delegation from the Prinzen-Garde Köln 1906 eV. 15 guardsmen of this corps company, changing daily, are assigned to the triumvirate as "protective guards". The prince's leader (Rüdiger Schlott), the head of the team (Manfred Block) and the three adjutants are an integral part of the entourage. Prince, Farmer and Maiden each have their own aide. The adjutant of the Prince Carnival is always provided by the Prinzen-Garde Köln 1906 eV. This is Marcus Heller since 2011. The adjutants of the Cologne farmer and the Cologne Jungfrau traditionally come from the EhrenGuard of the City of Cologne 1902 eV Volker Marx and Karl-Theo Franken currently hold these offices.

The Cologne triumvirate at the Rose Monday procession

The Cologne triumvirate plays a central role in the Cologne Rose Monday procession. It is the climax of the foolish parade, which passes the fools for about 5 hours. The Cologne Rose Monday procession is traditionally opened by the Blauen Funken (Kölner Funken-Artillerie von 1870 eV blue-white) . The last two groups always form the Honor Guard of the City of Cologne 1902 eV , which rides in front of the peasant and maiden float, and the Prinzen-Garde Köln 1906 eV , which accompanies the prince.

In the history of Cologne's three stars, it happened a few times that individual figures or even entire three stars did not take office, had to resign or resign.

Representation of the Cologne Virgin by men

The Cologne triumvirate is traditionally represented by men, including the role of the virgin. Exceptions were the years 1938 and 1939, when, due to a decree by the NSDAP, all women's roles in the carnival were to be represented or abolished by women. The women's costumes, which were placed close to homosexuality , did not fit into the image of men of the National Socialists . After the war, however, the role was again occupied by men, in contrast to the role of Sparkmariech , which is still played by women today.

Cast of the three stars in Cologne