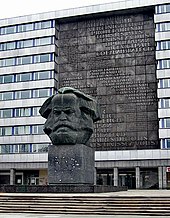 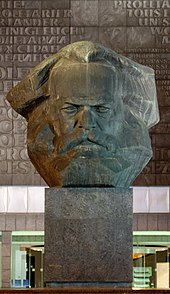 The Karl Marx Monument is a 7.1 m (with a base over 13 m) high and approx. Forty tons heavy sculpture , which stylized shows the head of Karl Marx . It was realized according to a design by the Soviet artist Lev Kerbel and inaugurated in 1971. It is the most famous landmark of the city of Chemnitz and is located in the city center on Brückenstraße near the intersection with Straße der Nations . This monument is, after the 60 cm higher Lenin head in Ulan-Ude , the second largest portrait bust in the world. On the wall behind the monument on the “party saw” (colloquial for the building of the former council of the district , with its sawtooth-shaped continued development, which served as a domicile for the SED district leadership in the 1980s ) you can see the words “Proletarians of all countries unite! ”from the Communist Manifesto in the four languages ​​German, English, French and Russian. This wall was designed by an artist collective in which the graphic artist Helmut Humann was involved. The State Office for Taxes and Finances is currently located behind the monument .

The city and the district of Chemnitz were renamed Karl-Marx-Stadt on May 10, 1953 after the Second World War . This also initiated the reconstruction according to plans of socialist urban development . With a monument in honor of the namesake, this transformation into a city of socialist type should be embodied.

For the creation of such a sculpture , the Soviet sculptor Lew Kerbel proposed 17 basic designs, only one of which corresponded to that of the actually implemented monument of a head on a base. All other designs were conceived as holistic representations of Karl Marx's body. The decision was made in favor of the sole representation of the head, since the viewer would have seen the shoes of the philosopher in a full body representation at head height.

Months before it was erected in Karl-Marx-Stadt, the monument was cast in bronze in the Monument Skulptura art foundry in Leningrad and then dismantled into 95 individual parts. In Karl-Marx-Stadt these were to be welded together again, but the Soviet technology was not suitable, so the decision was made to transfer the order to VEB Germania , as otherwise the welded parts could be torn apart. The monument stands on two plinths , which are covered with slab-like Korninsky granite , named after the mining region in southern Ukraine.

On October 9, 1971, the monument was inaugurated in front of around 250,000 people who were on the Karl-Marx-Allee (popularly known as “Nischelgasse” or “Skullgasse”), now again on Brückenstraße, which runs alongside the monument. Erich Honecker and Robert-Jean Longuet , great-grandsons of Karl Marx, were present at the unveiling of the new landmark . The symbol of Karl-Marx-Stadt was also the motif of the frequently used 35 pfennig postage stamp from the permanent series " Construction in the GDR" . It corresponded to the postage postage to the Federal Republic of Germany at that time.

FDJ meeting on the evening of October 9, 1971, the day of inauguration 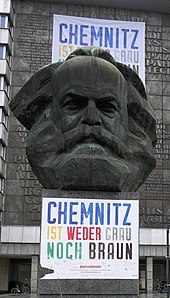 Banners at the Karl Marx Monument: "Chemnitz is neither gray nor brown" (2018)

As the landmark of Karl-Marx-Stadt, it served as a backdrop for pageants and other mass events during the GDR festivities . The city of Chemnitz retained this symbol of socialism even after German reunification , although the demolition of the monument was hotly debated when it was renamed to the earlier city name. Numerous cities from all over the world expressed interest in buying, and there were already discussions about selling to Cologne . Until 2007, the local motto was "City with brains", which referred to the monument.

A project by the Lithuanian artist Deimantas Narkevicius planned to bring the head to Münster in 2007 for the duration of the exhibition Sculpture.Projects and to exhibit it there. This, as well as the making of a copy for Münster, failed due to the veto of the city of Chemnitz, Kerbel's widow had agreed. Students from the University of Art and Industrial Design Linz and the Applied Arts Schneeberg Faculty of the West Saxon University of Applied Sciences in Zwickau planned a temporary enclosure for the monument at the original location in cooperation with the New Saxon Gallery in Chemnitz and made the head accessible from the inside. The art project under the title "Temporary Museum of Modern Marx" was started on June 17, 2008 - an allusion to the popular uprising on June 17, 1953 - and was until August 31, 2008 - an allusion to August 31, 1990 as the date the signing of the German-German Unification Treaty - accessible.

From the end of 2011 to April 4, 2012, renovation measures were carried out on the base. Damage to the pavement and the concrete was caused by water and moisture that had penetrated the tile joints. In March 2013, the band Seeed shot their music video for the song "Deine Zeit " at the Karl Marx Monument in Chemnitz.

During the riots in Chemnitz in 2018 , the monument came into the focus of media coverage as a meeting place for various political groups. The day-long demonstrations and arguments took place against the backdrop of the monument. Finally, as a reaction to the right-wing extremist riots, an action alliance put on banners with the slogan “Chemnitz is neither gray nor brown” on the base and on the building wall behind it with the words “Proletarians of all countries unite!”.