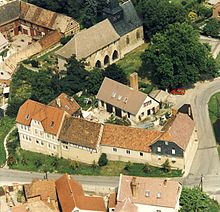 The Lords of Capelnorf come from Kapellendorf , a Thuringian noble family who were raised to Burgrave of Kirchberg (near Jena ) in 1149 and had risen to a rank equivalent to the count's families in the aristocratic hierarchy . Already in the 12th century the parish church in Kapellendorf was in the fiefdom of the burgraves of Kirchberg , who founded a (small) Cistercian monastery here in 1235, probably also as a demonstration of their social rise, which was also intended for hereditary burial.

The monastery was equipped with extensive real estate in the places Taubach , Umpferstedt , Sulzbach (Apolda) , Hermstedt , Romstedt , Kötschau , and Frankendorf and Hausdorf (desert south of Kapellendorf). A display board in the castle museum shows the ownership structure during the heyday of the monastery in the 14th century, showing around forty places between the Saale and Ilm .

In 1256, a dispute over the orderly life in the convent is documented. Presumably as a result of this dispute, 15 nuns left the Kapellendorf monastery before 1260 and founded the Bachra monastery . However, this went up after a few years in the Donndorf monastery .

Hedwig is known as the first abbess of the monastery known by name for the period from July 1263 to 1300; she may have been close to the Kirchberg family. After the downfall of the burgraves, their umbrella bailiwick was formally passed on to the fiefdom successors, from 1352 onwards the city of Erfurt and from 1446 on the Vitzthum family belonged . In 1451 the village of Kapellendorf and the monastery became the scene of a siege of the moated castle that lasted several weeks. These unfavorable external conditions led to the rapid decline of monastic life. In addition to its cultural and economic importance, the monastery was a large agricultural enterprise; in 1508 it became the property of the Wettins . In the course of the Peasants' War in the spring of 1525, the monastery was badly hit and the nuns took shelter behind the walls of the moated castle. After the Reformation , the Kapellendorf monastery was secularized in 1527 , and the Kapellendorf church from then on served as the parish church. Apart from the church, nothing of the monastery buildings remained. According to the building report, the monastery could have joined today's church to the south.

In 1959, the Kapellendorf community began setting up a home parlor. This was quickly expanded to the castle museum and shows the local history, initially with a focus on the castle history and the events of the battle of Jena and Auerstedt . The Kapellendorf monastery was subordinate to the imperial abbey of Fulda and exercised parish rights over the places Kapellendorf and Großschwabhausen . In addition to significant donations from the founding family, the monastery also acquired property in the vicinity of the city of Jena. The numerous documents that have been preserved make it easier to study the history of the monastery.

During the restoration in the 1980s, Horst Jahresling was the consultant.