Under war economy or war economy one of the necessities of is war -oriented economic order a party to the conflict understood with the help of these attempts, their own economy so as to establish or alter, and the economy of the occupied their territories that they will be well meet the requirements of the military situation as possible.

Typical forms of the war economy are either interventionism that regulates the market economy , but which does not completely abolish the market or private ownership of means of production or the free movement of workers, or central administrative (= planned) control. In the latter case, however, the peculiarities of the war economy must not be confused with the central administration economy itself.

The aim of economic mobilization is the provision of goods such as a. Weapons , ammunition , military equipment and food to meet army needs. The resulting arms production is limited on the one hand by the raw material base , the availability of labor and the financing of war, on the other hand it itself restricts the supply of the population and the civil economy . The two sectors compete for scarce goods ; A decision has to be made on the allocation of resources . The regulation of consumption is the responsibility of a bureaucratic distribution system, the efficiency of which ultimately determines the material framework for warfare in the industrial age .

War economic policy gained particular importance during World War II . Based on the experiences of the First World War and the failure of a liberal war economy attempted in individual countries at the beginning of the Second World War, all participating states resorted to dirigistic war economic measures. The Reichsgruppe Industrie was the self-governing head of German industry (along with others such as the Reichsgruppe Handel, Reichsgruppe Handwerk etc.). There were also regional chambers of commerce; so there was a kind of matrix organization . The well-known lawyer and economist Franz Böhm (1895–1977) coined the term 'combined constitution' for what was practiced by the Nazi regime .

In the Thirty Years' War , the financing of the war and the supply of the troops were mainly ensured through contributions : Until then, the residents of occupied territories had to provide mainly natural produce (food, wood, salt). The mercenary leader Peter Ernst II von Mansfeld coined the catchphrase for this: War feeds war . Friedrich Schiller took up this formulation and put it in The Piccolomini , the second part of his Wallenstein trilogy , in the mouth of the Croatian General Isolani . A major innovation in the war economy of the general Albrecht von Wallenstein was to demand money to pay his soldiers. Through these "war or occupation taxes" the ability to wage war was decoupled from the financial possibilities of the warlord, since he no longer had to pay his troops himself. At the same time, this increased the need for further conquests, since the warlords often could not have paid the wages on their own.

In societies organized according to the market economy , the owners of industrial production and research capacities usually voluntarily support their country's war efforts, be it out of patriotism and / or because they have to fear the loss of their assets in the event of a lost war (see, for example, German inflation 1914 to 1923 ; military Goods in the First World War ).

This is why factories or means of production were rarely confiscated in the past . The approach of the large industrialized countries was therefore mostly aimed at cooperation between the state and entrepreneurs, with the aim of converting industrial capacities to the production of goods essential to the war effort. The expansion or construction of such industrial plants was often promoted with additional government incentives, such as price guarantees, participation in construction costs, the provision of inexpensive labor (such as prisoners of war ) and other measures. In contrast to purely state-run companies in a planned economy , the experience and greater innovative strength of private entrepreneurs were used or preserved for the war economy. This was more efficient than building a central administration economy (= "planned economy"); the production quantities demanded by war ministries or the leaders of military organizations can generally be achieved faster and / or better in quality with lower raw material consumption and personnel requirements.

As Wilhelm Röpke put it, following the logic of war in the 20th century (especially the "total" Second World War), it turned out to be a regrettable necessity to replace the free market economy with war collectivism. The total war was to enable namely the tendency, every nation in a kind of economic state of siege, in which the rationing importantly, through production or importation of goods but not sufficient beschaffbarer downright imposing. Close cooperation between the manufacturing industry and the state can lead to the extensive elimination of intermediate trade (keyword war profiteers ). This lowers the purchase prices for the warring state and can improve the quality of the goods produced.

In societies organized according to a planned economy , on the other hand, only the production priorities are shifted and part of the previous production of civil goods is converted to military goods. 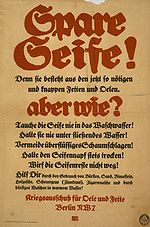 During the First World War, a German poster calls for the population to save soap

In the event of armed conflicts, shortages usually arise quickly due to the increased need of the own military and the partial interruption of raw material imports. Particularly affected are raw materials that the warring state cannot mine or produce itself. Consequently, in the context of the war economy, provisions must be made quickly for a secure supply of the military and the civilian population.

The administration of a functioning state has various means of doing this:

During the Second World War, an American poster calls for the loan of private binoculars to the US Navy

The financing of the enlarged military and the expansion of production and conveyor systems in industry increased by leaps and bounds from the beginning of the war on government spending. States and other war participants can go different ways to cover this additional need for money. As a result of the enormous sums that had to be raised by the participating states, especially in the two world wars, the options were essentially limited to the following measures:

In addition to the classic ways to pay for a war described, other financing options are also common, even if they are far less profitable:

The origin of money that is spent in war, especially by non-democratic states or groups, is usually not transparent.

Organization and coordination of the war economy

The main building of the Deutsche Reichsbank in Berlin around 1900

The organization of the war economy in the industrialized countries takes place today and in the past initially on the basis of the quantities required by the military, as estimated by the defense or war ministries . The task of financing is usually the responsibility of the respective central banks .

The central banks are not simply the authorities of the war ministries who are bound by instructions, but can also intervene to control, negotiate with industry or even prevent projects. For example, during the First World War , the German Reichsbank successfully refused, despite imperial instructions, to finance a new battleship to replace the cruiser Blücher , which was sunk on January 24, 1915 ; the project was canceled.

For various individual problems (such as a shortage of wood or iron), small working groups made up of representatives of the authorities and competent industrialists from the relevant area can be formed, who then develop proposals for savings and new production and procurement options. Depending on the supply situation, these proposals can have an impact deep in the private sphere of the civilian population.

Side effects of the war economy

In particular, the production of food for the civilian population suffers as a rule during long wars under the measures of the war economy. It lies

In the modern war economy, the food supply can also be worsened by measures such as the forced use of cultivation areas for plants for the production of drugs or synthetic fuel .

The extensive use of parts of the population in war, for example in the armaments industry , as a military helper ("Blitzmädel"), as a flak helper or in 1945 in the Volkssturm (see also child soldier ) has long-term effects on almost all areas of life and can considerably weaken a country or a region for a long time. The high priority of raw material and industrial production is often at the expense of the environment and can result in severe environmental damage, some of which only become apparent long after the end of the actual war. (see e.g. TNT production in Germany during World War II)

Uninvolved third countries can also suffer from the effects of the war economy, for example because - like Switzerland during the Second World War - they are completely surrounded by conflicting parties.

In Syria, after airplanes dropped relief supplies in the affected area in 2016, prices not only for the dropped food but also for other food fell. This is a sign of usury by war profiteers .

The war economy in World War II had a decisive influence on the course of the war and its outcome. While the respective military tactics had a decisive influence at the beginning , the course of the war was significantly influenced from 1942 onwards by the quantitative superiority of the war production of the Allies. The Third Reich and Japan used blitzkrieg tactics and were not prepared for a longer war. Great Britain, the Soviet Union and the USA, on the other hand, had consistently brought about a drastic expansion of war production since the beginning of the war, with the aim of winning the Second World War like a war of attrition . In the Third Reich, a drastic expansion of war production was only initiated in early 1942.

The war economy in World War II led to a significant expansion of women's work , especially among the Allies . Forced laborers were used on a large scale in the Third Reich and Japan .