Wilhelm Röpke (born October 10, 1899 in Schwarmstedt near Hanover , † February 12, 1966 in Geneva ) was a German economist and social philosopher . He is considered one of the intellectual fathers of the social market economy . Röpke had fought the emerging National Socialism. As a result, he lost his professorship for economics in Marburg in 1933 and had to flee the country because of threats to life and limb.

Wilhelm Röpke grew up in a liberal bourgeois country doctor family. After graduating from high school at the Athenaeum in Stade, he began studying law and political science in Göttingen in 1917 . In 1918 he did military service for a short time, later he studied in Tübingen and then in Marburg . There he turned to the study of political economy and received his doctorate in spring 1921 with distinction. He then took up a position as an assistant at the political science seminar with his doctoral supervisor, Prof. Walter Troeltsch . Röpke completed his habilitation in 1922 as a private lecturer in political economy at the University of Marburg and at the age of 24 was appointed as the youngest German professor in Germany to an associate professor at the University of Jena .

This was followed by a stay in the USA as a visiting professor of the Rockefeller Foundation , in 1928 he was appointed to the University of Graz and in 1929 to the Philipps University of Marburg , where he was professor of political economy until 1933. Röpke was also politically active: under the pseudonym "Ulrich Unfried" he wrote articles against the corporatist economic policy ideas of the conservative-revolutionary Tat group around Ferdinand Fried (hence the pseudonym) and Hans Zehrer .

Röpke was critical of the emerging National Socialism. He publicly advocated this. For example, on September 11, 1930, three days before the Reichstag elections, in view of the presumed success of the NSDAP in his home village, he distributed a leaflet entitled "National Socialists as Enemies of the Peasants", written "by a son of Lower Saxony," addressed "to the rural people" . In it he called the NSDAP an "anti-possessive, violent, revolutionary" organization that would destroy the international trust in the prudence and the will to build up the Germans, which is so important for overcoming the crisis, "establish the dictatorship of a party" and "make little fuss." "Once she has come to power." Those who vote for their candidate should not later claim that "they did not know what might result from it."

On December 27, 1932, the Vossische Zeitung published an article by Röpke in which he referred to the provisional leave of absence of the Breslau law professor Ernst Joseph Cohns and others caused by riots among National Socialist students . a. wrote: “The freedom of teaching and intellectual freedom threatened to the extreme by intolerance must be defended to the last. Intolerance of the professors themselves is a betrayal of the idea of ​​the university ”.

On February 8, 1933 nine days after the seizure of power by the Nazi regime, Röpke held under the heading Where are we, where we are driving? gave a lecture at Gustav Stolper's Association for Economic and Political Education in Frankfurt and stated, among other things: “With the seizure of power by the National Socialists, a mass uprising against the fundamental principles of everything we call culture began: a mass uprising against reason, freedom, humanity and against those written and unwritten norms that have emerged over the millennia to enable a highly differentiated human community without degrading people to state slaves. ”Röpke's critical remarks against National Socialism in the public funeral speech for his academic who died on February 23, 1933 Teacher Troeltsch was followed by angry reactions in the Nazi press . Because of his criticism of National Socialism, Röpke was removed from his teaching post by the National Socialist government in April 1933 . In the same year he fled into exile in Turkey . There he taught at the University of Istanbul from autumn 1933 and wrote his most successful book The Study of Economics ; this became the theoretical basis of his later economic and socio-political publications. For the winter semester of 1937/38 Röpke moved to Geneva , where he worked as a professor for international economic issues at the Geneva University Institute for International Studies . One of his doctoral students in Geneva was Carl Zimmerer . In the 1940s he began to write for the Neue Zürcher Zeitung and the Swiss monthly magazine, for which he wrote over 30 articles. In Geneva he put his socio-philosophical trilogy ( present-day social crisis , civitas humana, international order ) on paper, the basic features of which he developed in Istanbul with his faculty colleague Alexander Rustow . In it he described - in agreement with the representatives of the Freiburg School - his ideas of the economic order . Later the conservative influence in Röpke's thinking became stronger; this became clear in the cultural criticism expressed in “Beyond Supply and Demand” (1959) . Röpke wrote in the Swiss monthly magazine in 1964, "that the negroes of South Africa are not only people of an extremely different race, but also belong to a completely different type and level of civilization" (Röpke, 1964, p. 104). That is why the South African government's apartheid policy is completely justified. As a result, Röpke compares the white oppressive regime in South Africa with the Jews in Israel, whose raison d'etre were questioned by the Arabs. Whites in South Africa are in similar distress when faced with a predominance of blacks. Quinn Slobodian's study shows Wilhelm Röpke as a right-wing to reactionary figurehead of neoliberalism, which is about the dismantling of democracy, the preservation of property rights, deregulation and the financialization of the world economy.

Röpke was a founding member of the Mont Pelerin Society (MPS) in April 1947 and its president from 1961 to 1962. In the 1960s there was a dispute between a group around Friedrich August von Hayek and a group around Albert Hunold and Röpke about the future direction of the MPS. As a result, Röpke resigned from the presidency and resigned from the MPS.

Law , custom , morality , norms and convictions of values were decisive elements for the economics professor, for which not the market but the political level and the central bank always have to take care. With a “compliant” social , economic and financial policy , the task of which is to protect the weak “beyond the market”, to balance interests, to set the rules of the game and to limit power, Röpke strived for an economic system of “economic humanism ” is also called the “ Third Way ” by him . Röpke stands for a society and politics for which the protection of human rights is of the highest importance. From his point of view, the so-called “individual principle” as an important and elementary core of the market economy must be kept in balance with a well thought-out social and humanity principle. In European politics he warned against too much centralism .

The catchy sentence "The equilibrium price clears the market", which includes an optimal coverage of demand for the whole economy, comes from him. With his work, the liberal economist, who has published more than 800 works in over four decades, is one of those economists who, as scientists and political advisers, have significantly shaped the development in post-war Germany. For Ludwig Erhard he was "in the best sense a champion for the highest values ​​of humanity". 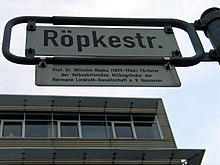 Legend on the street sign in Hanover-Bult : “Wilhelm Röpke [...], promoter of the people's share idea . Co-founder of the Hermann Lindrath Society eV "