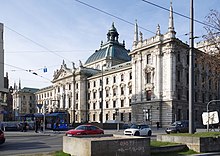 Palace of Justice , southwest side

Palace of Justice, southeast side

The District Court of Munich I is a court of ordinary jurisdiction . It is the largest of the 22 Bavarian regional courts .

The forerunner of today's regional court is the Bavarian district court in Munich on the right of the Isar , founded in 1857 , which was converted into a regional court with the Courts Constitution Act of 1879 .

19,291 lawyers are admitted to the Munich I district court .