The Leinertbrücke over the Ihme in front of the buildings on Spinnereistraße of the Ihmezentrum , in the foreground the landing stage at Emma-Frede- Weg

The Leinertbrücke is a tram and light rail bridge over the Ihme in Hanover . It connects the districts of Calenberger Neustadt , Linden-Mitte and Linden-Nord . The history of the bridge in the extension of Königsworther Straße and in the course of Spinnereistraße goes back to the second oldest traffic route between Hanover and Linden, built in the 19th century.

The traffic connection between Königsworther Platz (top right) and the freight station at Küchengarten (bottom left ), which was drawn in the Hanover city map from 1888

Parallel to the Glockseebrücke , a railway bridge ran from the Küchengarten to the Glocksee for the transport of coal to the gasworks of the Imperial Continental Gas Association , which later became the Stadtwerke Hannover

After for centuries the only bridge over the Ihme between Hanover and Linden was only the Ihmebrücke am Schwarzen Bären, the Glockseebrücke (after the nearby industrial city of Linden) was built from 1888 and 1889 to 1890 in the course of the industrialization and urban expansion of Hanover during the founding period with the then independent industrial city of Linden Glocksee settlement ). It was built at the same time as Lindener Straße , which was laid out from Königsworther Platz in 1889 and was then renamed Königsworther Straße from 1905 .

The Glockseebrücke was later also called the Spinnereibrücke because it extended into the Spinnereistraße , also laid out in 1889 , on which the Hanoverian cotton spinning and weaving mill was located.

Having already during the Weimar Republic , the first Nazis were formed and the SA had announced a march to Linden, blocked resisters from the traditional social democratic workers - stronghold Linden at least temporarily both Ihmebrücken.

Today's bridge in front of the Ihme Center

View from the Leinertbrücke onto the towers of the Linden thermal power station, which are illuminated in the evening

In June 1962, construction of a new bridge began to replace the spinning bridge, as the old one was no longer sufficient for the increasing traffic caused by automobiles and also did not fit into the concept of a car-friendly city at the time . When designing the new building, the planned flood protection on both sides of the Ihme was already taken into account after the experience of the flood disaster of 1946 . At the same time, the new bridge was built three lanes wider than the old spinning bridge . It is a three-span prestressed concrete bridge with a total length of 107.20 m, whereby the middle span has a span of 54 m. The width is 31.14 m. The Hanover Stadtbahn received separate tracks.

After completion, the new Ihmebrücke was given its current name in 1963 after the deceased mayor of Hanover Robert Leinert (1873-1940), who "[...] played a major role" in the unification of the two cities , which was also politically completed on January 1, 1920 Hanover and Linden had. 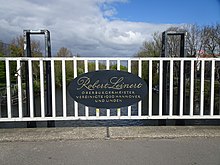 In 2008, the later mayor Thomas Hermann complained that many people could hardly "[...] remember the first democratic mayor of Hanover ". He therefore suggested explanatory "[...] legend signs or information boards" on the Leinert Bridge.

In March 2019 it was announced that the bridge would be renovated.