Love is just a fairy tale

Love is just a fairy tale is a German music film by Arthur Maria Rabenalt from 1955.

After completing her pianist training, the young Helga Lindenberg flies to Athens to meet her friend Dr. Klaus Weinert, who is doing research here with her father at the Biological Institute. She was looking forward to a few days with Klaus and doesn't know that both men will be with Dr. Lindenberg's assistant Angela Brinkmann actually had to work around the clock to complete certain research in ten days before the start of the Biological Congress in Rome . Klaus is so absorbed in his work that he does not show up at the airport in time to pick up Helga. It's singer Mario who is organizing a taxi for her. Helga's father and Klaus first try to make Helga's stay perfect. They go out and eat in a bar where Mario appears as a singer. The very next day, however, everyone has to work and Helga goes alone through Athens on St. George's Day. Although Klaus promises to take her through Attica , he cannot keep his promise when he has to step in as a diver unplanned. Helga uses her time to see Mario again. When she comes home that evening, she refuses to give Klaus any account of her long absence.

The next morning, the two of them initially reconcile, only to fall apart again in the end. One of the reasons is Helga's jealousy of Angela, who she suspects is an admirer of Klaus. Klaus goes out to sea alone, where he plans further research, while Helga travels with Mario to Cape Sounion to the Poseidon temple, which is a place for lovers. He sings for her and they both finally kiss. Since Mario can sing well, Helga promises him to support his career. When her father's school friend, Becker's music manager, announced himself in Athens and organized an evening event at Lindenbergs, Helga brought Mario into play as a singer for the evening. His performance was a great success and Beckers wanted to sign him. During the event, Dr. Lindenberg that Angela went to sea alone to get certain breeding containers out of the water. Klaus looks after her and saves her from the water, as she almost drowned after a boat accident. Dr. Lindenberg, who, unlike Klaus, is in love with Angela, asks her to become his wife, but she wants time to think it over. Klaus realizes that he has too little time to hold Helga, who is spending more and more time with Mario. However, Mario's friend Fritz warns her that it is not permanent and will only make her unhappy. In fact, after a short time, Helga sees Mario with another woman. She makes up with Klaus and is delighted when Angela and her father finally announce they are a couple. In order to be very clear about her feelings, Helga attended a concert by Mario shortly afterwards and then returned to Klaus, since she now knew that she only loved him. 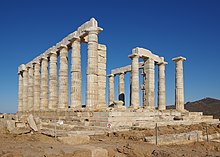 The Temple of Poseidon on Cape Sounion, where the film was set

Love is just a fairy tale based on an idea by Hans Billian . The film was shot on site in Greece , the studio recordings were made in the Berlin-Tempelhof film studios. The film premiered on December 16, 1955 in the Lichtburg in Essen .

The costumes were created by Walter Salemann , the film structures were created by Hanns H. Kuhnert , Hans Luigi and Peter Schlewski . The music comes from Willy Mattes, the lyrics were written by Günther Schwenn . Egon Kaiser plays with his soloists.

For the film-dienst , love was just a fairy tale, a "shallow entertainment film in a typical cinematic world, which uses bad hits and a banal plot as an opportunity to show Athens in bright colors."

Daddy | What am I without you | A seventeen year old | A child, a dog, a vagabond | The love of the Maharajah | The women's paradise | Millions of inheritance | Flirtation and love | Escape into the dark | Midsummer bonfire | White lilac | The 3 codonas | Attention! Enemy hears with! | … Rides for Germany | Light muse | My wife Teresa | Front theater | Love premiere | Circus Renz | Axel at the heavenly door | Chemistry and love | Tomorrow everything is better | The girl Christine | Anonymous letters | Martina | Nights on the Nile | 12:15 am Room 9 | Last night's wife | Wedding in the hay | Immortal light | The white adventure | The Ranger Christian | Mandrake | Genoveva | We dance on the rainbow | Fiakermilli - Favorite of Vienna | Lavender | The last waltz | The bird dealer | The immortal scoundrel | The sun of St. Moritz | The Gypsy Baron | The Tsarevich | Company sleeping bag | As long as there are pretty girls | Love is just a fairy tale | The marriage of Dr. med. Danwitz | Veterinarian Dr. Vlimmen | Between time and eternity | Soldiers of Fortune | Spring in Berlin | A woman who knows what she wants | That doesn't knock a seaman away | I can't live without you | Beloved Beast | Don't leave me alone on Sunday | The hero of my dreams | The great request concert | Man in the shadow | The child prodigy of Europe | The Empress | Jan Himp and the little breeze | Help, a virgin loves me | Sharks on board | Caribia - A film frenzy in stereophony