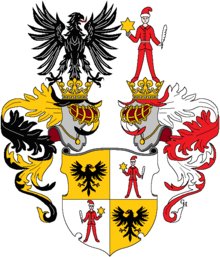 Coat of arms of the Knights of Schullern zu Schrattenhofen

After attending the first six classes of grammar school in Innsbruck and the infantry cadet school , Manfred Schullern completed his school education in 1914 with the Matura .

In the course of the First World War , he did his military service as a lieutenant in the 1st Tyrolean Kaiserjägerregiment , was wounded three times, until he was finally summoned to Vienna in November 1917 as a first lieutenant in the Life Guard Infantry Regiment.

In July 1920, Schullern disarmed and, after a failed attempt to gain a foothold in the private sector, devoted himself to studying political science at the University of Innsbruck , where he received his doctorate rerum politicarum in 1927 . In the interwar period , Schullern worked as an official auditor at the Post and Telegraph Directorate in Innsbruck.

When the National Socialists came to power , Schullern was arrested by SA men and taken into custody. He spent another six weeks in Gestapo detention in 1939, after which he was drafted into the Wehrmacht , which led him to the Air Force in 1940 . As a major and commander of an Air Force Pioneer Battalion , he was responsible for building field airfields in France , Italy and Russia . In March 1945 he withdrew with his battalion on the Rhine and led it without entering into combat, marching across Germany to the North Tyrol area, where it was disarmed on May 3rd.

Immediately after the war, he was appointed to the administrative service of the Innsbruck city council as head of the resident registration and registration departments as well as the housing office with the official title of city inspector.

In 1947 Schullern was assigned to the Foreign Service as Consul 1st Class of the legation in Rome, where he was employed until June 1948. In June 1948, Manfred Schullern was commissioned by a Council of Ministers to set up the Consulate General in Milan, which he headed until August 1953. His appointment as Consul General 2nd class was pronounced in July 1952 by the Federal President Theodor Körner . In the course of his diplomatic career, Schullern headed the then Austrian liaison office in Trieste in 1953 and 1954 and, from July 1954, the consulate general in Zurich . In August 1956 until his retirement in December 1958 he was appointed head of the Austrian Consulate General in Trieste. After Schullern was very popular with the Austrian community living in Trieste, the Austrians in Trieste asked the Foreign Office to grant Schullern a year of honor that, with the approval of a Council of Ministers decision, could continue to be used until March 31, 1959 (Section 10 Para. 3 B- ÜG) has been fulfilled.

Manfred Schullern died in his hometown of Innsbruck on September 10, 1959.