This article deals with the suburb of the Australian port city of Sydney. Other meanings under Manly (disambiguation) .

Manly is a district of the metropolis Sydney in New South Wales , Australia with about 15,000 inhabitants. Manly is famous for its long ocean beach and the steady waves that are popular with surfers across the borders of Australia. In contrast to the city beaches of Bondi Beach , Coogee Beach, Bronte Beach and Tamarama, life in Manly is even more relaxed. You can still feel that Manly is " Seven Miles from Sydney, but a Thousand Miles from Care ", as the inscription on the harbor promises.

In Manly also the seat of is administrative region Manly Council . 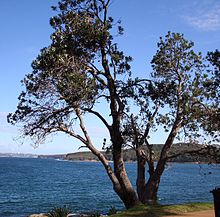 Manly is located at the entrance to Port Jackson , one of the largest natural harbors in the world. With an area of ​​50 square kilometers and 19 kilometers in length, Port Jackson forms the main arm and at the same time the natural harbor of Sydney. Other inlets such as Middle Harbor branch off from it. Manly Cove is a small bay on the Inner Harbor . From there it is about 500 meters to Manly Ocean Beach on the other side of the isthmus.

On South Steyne, the southern stretch of beach, huge Norfolk fir trees and numerous cafes and restaurants line the beach promenade, which stretches over North Steyne to Queenscliff. Manly Beach is (apart from Shelly Beach) the southernmost of Sydney's northern beaches, which are strung together for more than 20 kilometers up to Palm Beach.

The first map of the Sydney area from 1789

Manly got his name on January 21, 1788 by the commander of the First Fleet , Captain Arthur Phillip , on a three-day exploration tour of Port Jackson . Captain James Cook had already marked the entrance to Port Jackson on his maps in 1770, but never explored it. Captain Arthur Phillip was so impressed by the manly behavior of the Tharawal , an Aboriginal tribe who waded towards his three boats when they first met, that he named the place Manly Cove . The next day he christened a bay across the harbor from Sydney Cove .

In the 1820s, isolated settlements sprang up in the Manly Cove area. By 1841, however, only 38 men and 29 women were registered as residents who made a living from fishing and agriculture. Henry Gilbert Smith (1802–1886), a British businessman from Northamptonshire , realized that Manly - with the ocean beach on one side and the fine sandy bay on the other - would be an excellent seaside resort for the people of Sydney - just like it Brighton was for the Londoners . In the years from 1853 he therefore began to acquire land in this area.

Norfolk firs ( Araucaria heterophylla ) were planted along the shore , and by 1855 Smith had built a pier and built the Pier Hotel. In March 1856, a narrow road was built that connected the harbor with Manly Ocean Beach. Henry Gilbert Smith named it the Corso (after a street in Rome ). Smith also promoted the establishment of a ferry service to Manly. From 1854 the first excursions were offered with the paddle steamer The Brothers . Manly, previously only connected to Sydney by the 70 mile road link via Parramatta , Hunter's Hill , Lane Cove and Narrabeen , had been de facto isolated from the city until that day.

On the alternative route, the Port Jackson at Dawes Point and the Middle Harbor at Spit Bridge previously had to be crossed by rowing boats. From 1856 there was finally an irregular ferry connection to Sydney. To attract visitors, Smith came up with a number of things. You can still meet his stone kangaroo at the entrance to the Corso. In 1859 he acquired shares in the steamer Phantom for the regular ferry service from Manly to Sydney, which was affectionately known as Puffing Billy because of its smoking chimney . From 1874 the Mystery expanded the ferry service between Sydney and Manly.

Henry Gilbert Smith did a lot for the community and is rightly called Manly's father. He donated land on which parks, churches, schools and other public buildings could be built. Much of Manly's character still owes to his vision. He initially named his project Ellensville after his first wife, but later changed the name to Brighton. Manly was therefore also called the Brighton of the South . When the first city parliament was constituted on January 6, 1877, the name Manly was officially adopted. The architect Colonel Thomas Rowe became the first mayor.

Today's town hall opened in 1937 on the occasion of the 60th anniversary of Manly. For nearly a century, the Port Jackson Steamship Company operated the Sydney to Manly ferry service. It was she who advertised Manly in 1940 with the slogan " Seven Miles from Sydney, but a Thousand Miles from Care ". In 1972 it was taken over by Brambles Industries and two years later it was owned by the New South Wales Government . In 1903 Manly's first tram line opened, which was replaced by buses 36 years later. The last tram left Manly Wharf on October 1, 1939.

In addition to the famous Manly Ocean Beach, Manly offers its visitors numerous other natural attractions such as Manly Cove, Shelly Beach and Sydney Harbor National Park with numerous hiking trails. The seven nautical mile long ferry crossing from downtown Sydney via one of the largest natural harbors in the world ( Port Jackson ) to Manly Cove is also worth seeing.

The possible leisure activities range from swimming and surfing to tennis, golf and beach volleyball to parasailing, diving, sailing and fishing. Sea kayak tours are also offered. A marine aquarium, art gallery, museum and annual festivals complete the offer. All of this attracts over six million visitors annually to Manly on day trips or long stays.

The old North Head Quarantine Station on North Head is one of Manly's most unusual sights. From 1832 to the 1960s, it served as a reception center for immigrants who were suspected of having come into contact with infectious diseases. To prevent the spread of epidemics, they were locked up there until the incubation period had expired . The last ship was quarantined in 1972 . The quarantine station was a museum, is now a hotel and part of the Sydney Harbor National Park . In addition to the view of Sydney harbor, it is also a natural home for little penguins .

Also worth visiting are the Manly Art Gallery and Museum and the North Fort and Royal Australian Artillery National Museum .

Badge of the skier Zali Steggall on the Pathway of Olympians

Oceanworld is a marine aquarium located on Manly Cove Beach, just 200 meters from the Manly Wharf Ferry Terminal . Daily live shows and tours bring visitors closer to sharks, stingrays and crocodiles as well as poisonous snakes and spiders. Live corals from the Great Barrier Reef can also be admired here.

In addition to the historic hiking trails, on which one can follow the history of Manly and Sydney to the times of the Aborigines , there are a variety of hiking trails with views of cliffs, beaches, the Pacific Ocean and Sydney Harbor. Worth mentioning is the Manly to Spit Bridge Walkway . It is about 10 kilometers long and runs along Sydney Harbor.

The Manly Pathway of Olympians commemorates the many athletes who have represented Australia at the Olympic Games over the past 100 years . The path is equipped with more than 83 information boards and is brought up to date after the Olympic Games. 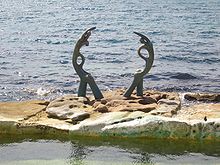 The Manly Food and Wine Festival ("A Taste of Manly") on the promenade of Manly Ocean Beach has around 30,000 visitors annually. Manly introduces its restaurants and New South Wales its wines. It takes place on the first weekend in June.

The Manly International Jazz Festival with Australian and international jazz music is held on six open-air stages in the center of Manly. Indoor concerts can be attended in the evening. The festival takes place annually on the long Labor Day weekend in October.

The Manly Arts Festival is held in September. The Manly Arts and Crafts Markets opens every weekend except bank holidays, and the Manly Village Public School Markets every third Saturday of the month. 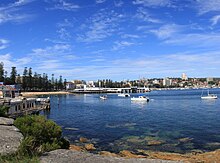 The easiest way to get to Manly is by ferry ( 30 minutes ) or Jetcat ( 15 minutes ) from Circular Quay . The Manly Rocket Express ferry runs from Darling Harbor via Circular Quay to Manly and back via Rose Bay in just 35 minutes. But there is also a (quite long) bus connection from Sydney's city center, which leads over the Sydney Harbor Bridge and the Spit Bridge.

The ferries have been docking in Manly Cove (a small bay on the Inner Harbor ) since 1854 , whose sandy beach is sometimes mistaken for Manly Beach by visitors. From the ferry dock you can take the Corso (Manly's busy pedestrian zone) to Manly Ocean Beach on the other side of the isthmus in a few minutes .