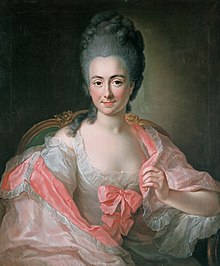 Maria Antonia von Branconi , b. von Elsener (born October 27, 1746 in Genoa , † July 7, 1793 in Abano ) was mistress of the Hereditary Prince Karl Wilhelm Ferdinand of Braunschweig , friend of Johann Wolfgang von Goethe and owner of several estates, including Langenstein . The Branconi was considered the most beautiful woman in Germany in her time.

The daughter of German-Italian parents grew up in Naples . At the age of 12 she was married to JJ Francesco Pessina de Branconi († October 21, 1766 in Rosarno , Province of Reggio Calabria ), an official of the royal Neapolitan general leases. At the age of 20 she was already a widow and mother of a son and a daughter. One month later, in November 1766, she met the Brunswick heir to the throne, Karl Wilhelm Ferdinand (1735–1806), who was on extensive study trips through Europe after his marriage in 1764.

She went with the Brunswick Hereditary Prince as his official mistress to Brunswick. Their son, Karl Anton Ferdinand (1767–1794), was born on December 29, 1767 and was baptized as a Protestant in St. Andrew's Church. The grandfather, Duke Karl I , who acted as baptismal witness , campaigned for the illegitimate child to be raised to the rank of imperial count as Count Forstenburg. The education was taken over by the scholar Johann Joachim Eschenburg .

Branconi owned a palace on Wilhelmstrasse in Brunswick , which was a social meeting place. In 1776 she bought Gut Langenstein in the Halberstadt district . In 1774 she and her two children from her marriage to Branconi were ennobled by Emperor Joseph II . The break with the Hereditary Prince took place in 1777, which made Luise von Hertefeld his new mistress.

Change of residence and travel

Branconi moved to Langenstein in 1777 and made several trips to Switzerland and France, on which she was accompanied by her secretary and steward Carl Johann Conrad Michael Matthaei (aka Samson Geithel). In 1786 she bought the Chanet estate near Neuchâtel . She lived in Paris from 1787 to 1791 and stayed in Langenstein for the last time in 1790. A son named Jules Adolph Marie was born in 1788 from another relationship.

At the end of 1791, Branconi moved to Frankfurt am Main, already in poor health . To alleviate her health problems, she went on several bathing trips, using the pseudonym "Frau von Hoppelberg". During this time she wrote her will and began looking for an adoptive mother for her youngest son. After a serious illness, Frau von Branconi died in 1793 while taking a cure in Abano.

After the founding of the Prussian province of Saxony, her eldest son became district administrator of the Osterwieck district .

During her stay in Braunschweig, Branconi met several of the professors teaching at the Collegium Carolinum there, including Johann Joachim Eschenburg and Johann Arnold Ebert . She had contact with the poet Johann Wilhelm Ludwig Gleim in Halberstadt in 1773/74 , against whom she later tried in court for disputed hunting rights. In Aachen in 1774 she met the writer Sophie von La Roche . On a trip to Switzerland in 1779 she met the philosopher and writer Johann Caspar Lavater in Zurich and then in Lausanne JW von Goethe. He was fascinated by her beauty and her spirit. Her visit to Weimar in 1780 was followed by two return visits by Goethe in 1783 and 1784 in Langenstein. He exchanged letters with her and sent her manuscripts of his works, such as " Iphigenie auf Tauris " and " Wilhelm Meister ". The statement that Branconi served as a model for Countess Orsina in Lessing's “ Emilia Galotti ” cannot be proven.

King Friedrich II. Of Prussia wanted to know “who actually was the von Branconi born. from Elsner is? also whether and from which foreign country you have established yourself, with the stated considerable property, in the principality there? " . Thereupon she assured on February 13th, 1786 in Neufchâtel, "that I am father and mother of my parents and grandparents because of my legitimate marital parentage."

A portrait of Branconi created by Anna Rosina de Gasc is in the Duke Anton Ulrich Museum in Braunschweig .

There is also an illegitimate son with Karl Wilhelm Ferdinand von Braunschweig named Karl Anton Ferdinand Graf von Forstenburg (born December 29, 1767, † September 24, 1794 in Frankfurt am Main ). This son was a lieutenant colonel in the staff of Hohenlohe. He died of wounds he sustained in the Battle of Kaiserslautern on September 21. There he was adjutant wing of Lieutenant General von Hohenlohe . Karl Anton Ferdinand was ennobled as Count von Forstenburg in 1770 .

Between 1787 and 1788 Branconi began a relationship with a largely unknown man named Vincent, which was largely viewed negatively by others. From this relationship arose their last child, a son named Jules Adolph Marie († August 30, 1862), who was raised by an adoptive mother in Berlin after her death and later worked as a stable master for the Grand Duke Georg of Mecklenburg .

Maria Antonia Pessina de Branconi and her legitimate children were accepted into the knightly imperial nobility with the German name “von Branconi” in 1774.

In Wernigerode Castle, which is used as a museum, a so-called Branconi room was inaugurated on July 19, 2011, which, in addition to her portrait, shows furniture from her property that had been in Langenstein Castle until it was expropriated by the land reform in 1945. A personal relationship between Maria Antonia von Branconi and Wernigerode and the ruling Count of Stolberg cannot be proven.