The Marie-Curie-Gymnasium Dresden (MCG) is a grammar school in Dresden with an artistic, social and natural science profile. The high school has been named after the French physicist and chemist Marie Curie since 1996 .

The MCG was founded in 1955 as the second elementary school not far from the Dresden country house on Friesenstrasse. Four years later the foundation stone was laid for today's school building on Zirkusstraße, which was inaugurated in 1960 as the 2nd polytechnic high school. The school was built on the ground that was covered by a three-meter-thick layer of rubble due to the destruction of Dresden during the Second World War.

In 1965, 1,350 students studied at the ten-class school, with the building on Friesenstrasse serving as a branch. In 1972 the MCG was named "Herbert Bochow Oberschule" after the resistance fighter Herbert Bochow . It was not until 1992 that the school was renamed “Gymnasium Dresden-Mitte” and finally in 1996, on the initiative of the student representatives, the city council of the state capital of Dresden renamed it “Marie-Curie-Gymnasium”.

Since 2003 the MCG has been one of around 8,000 UNESCO project schools worldwide . Until 2011, the MCG used the building of the former 18th primary school on Terrassenufer as a branch. From 2012 to 2014 the school building was extensively renovated and expanded. 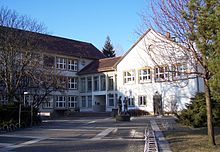 Main entrance of the Marie-Curie-Gymnasium 2009 before the renovation

Auditorium with sgraffito by Alfred Hesse

The MCG school building was built in 1959 and, like most of the open spaces belonging to the school, is listed in its entirety. The striking school building was created as a type school building from the SVB series and is divided into the pavilion system. It was built from brickwork and has a pitched roof that is tiled. Until 2012, the U-shaped floor plan included a head building, a connecting building to the auditorium with cafeteria and an elongated, three-story main building with teaching rooms, as well as a gymnasium with connecting building, which was demolished during the renovation of the building. While the school was completed in 1960, the auditorium was only inaugurated in 1962. On its outer wall is the sgraffito The First Man in Space by Alfred Hesse , which commemorates Juri Gagarin's first space flight on April 12, 1961 and shows Thälmann pioneers celebrating.

The auditorium was renovated in 2009 in accordance with a listed building. Two murals from the time the school was built have been preserved in the school building. The plastic girl's head donated by Lea Grundig was installed near the auditorium in 1962 and was removed from the old location as part of the renovation from 2012. There is a sports field and a school garden on the school premises. In front of the main entrance there has been a sculpture for students and teachers at the polytechnic lessons of the artist Johannes Peschel since 1964 .

The school building was renovated and expanded from February 2012 to August 2014. A design by the Dresden architecture firm Code Unique Architekten , which won the competition in 2008, was implemented. During the renovation, the students were taught in the former Gorbitz grammar school. The cost of the renewal was estimated at around 24.5 million euros.

In April 2012, work began on a new, three-story extension, which was created as a crossbar to the previous old building. For this, several old trees had to be felled, which were replaced by new plantings after the construction work was finished.

Already at the beginning of the construction work it was suspected that bombs from the Second World War could be on the site due to the inner city location. In fact, in January 2013, an aircraft bomb from the Second World War was found on the school premises, which was defused after around 2,500 residents had been evacuated. Previously, old machine parts and steel girders had been found, which were initially assigned to an old workshop on the site. In the cellar vaults that belonged to residential buildings destroyed in World War II, the construction workers also found around 30 negative printing plates made of soapstone, which served as lithographic printing templates. They belonged to the company Buchdruckerei and Verlag Friedrich August Wolf. which was on the MCG site until 1945.

Due to the layer of rubble on which the school was built, the new building could not be built on a simple base plate. In order to be able to stabilize the crossbar sufficiently, it was erected on twelve meter deep reinforced concrete piles. This work began at the beginning of May 2012. The official laying of the foundation stone for the new building took place at the beginning of June. The 16-meter-high crossbar shell was completed in May 2013, and interior work followed.

The extension contains classrooms, all specialist cabinets and the school canteen with dining room and terrace. The building also forms the new main entrance to the school with a foyer. One of the main doors of the new building is adorned with a light construction by the Dresden artist Sebastian Hempel, which is supposed to depict an Atomium based on the school logo. Another special feature of the building is the roof, which has been planted with ground cover.

In the course of the new construction, the old single-field sports hall and the building connecting the main building and the hall were demolished in March 2012. For the construction of the new three-field sports hall, a mixed water collector - one of the largest main sewer pipes in Dresden - had to be diverted, which no longer runs under the school. The shell of the sports hall was completed in mid-July 2013. Part of the previous playground was converted into a small playing field, a 100-meter running track and a long jump and shot put facility.

Old building From December 2013, the old school building was partially gutted and old floors, heating pipes and walls were torn down. Around 20 percent of the old building material could not be reused during the renovation. Nevertheless, numerous details of the listed interior, including the terrazzo floor, old radiator cladding and wall paintings from the time of origin, have been preserved. After the construction work was completed, classrooms were set up in the old building. The school library, a theater and band rehearsal room as well as the school auditorium, which was renovated in 2009, are also integrated.

The old building and the new crossbar are connected to each other via a glass passage above ground, while the gymnasium is connected to the crossbar via the basement. At the beginning of September the MCG was reopened with a school festival.

The fifth and sixth grades serve as an orientation level for the students. English lessons are given from the fifth grade. From the sixth grade, a second foreign language is also taught; Here students can choose between French, Russian and Latin. Other foreign languages, including Chinese, Spanish and Japanese, are taught in working groups. From the eighth grade onwards, the students specialize in either the natural, social or artistic profile. In addition to classic advanced and basic courses in grades 11 and 12, subjects such as “Astronomy” and “Computer Science” as well as interdisciplinary basic courses such as “Performing Games” and “Biotechnology / Bionics” are offered.

The school's mission statement, adopted in 2006, is “experience learning - learn through experience”.

The MCG has been one of 13 recognized Saxon UNESCO project schools since 2003. These schools feel obliged to include education for democracy, environmental education and education for tolerance. All MCG projects and exchange programs are subordinate to these general ideas.

Since 2005 there has been a student exchange program between the MCG and the German International School of Silicon Valley, USA. Several students spend around three months with host families and attend the partner school during this time.

Since 2007, the MCG has been offering an all-day program in accordance with the funding guidelines of the Free State of Saxony. In addition to language courses and targeted subject support, for example chemistry or preparatory courses for the Mathematics Olympiad, these also include working groups. Among other things, the following are offered:

There is a support association at the school, which aims to improve and create variety in school life. He supports projects and events but also class trips or individual students in special situations.