Microsoft Windows 3.1 (working name: Janus) is a graphical user interface from Microsoft that is based on PC-compatible DOS such as MS-DOS or PC DOS .

Windows 3.0 was very successful, but it was not spared from criticism. In practice, it was found that the operating system was prone to crashes. In addition, the operating system was still considered too slow for productive use. Bill Gates announced an improved version of Windows 3.0 for the middle of 1991. In addition, a porting library should appear to port Windows programs to IBM OS / 2 , which many users still preferred because of its stability. Although improved stability for Windows 3.1 was announced, the companies waited in vain for the new operating system, so many continued to stick with IBM OS / 2.

The "graphical operating system extension" Windows 3.1 was published on April 6, 1992 and was first available as an update for an earlier Windows.

The most important new features include support for TrueType fonts and the OLE interface, and drag and drop has also been introduced.

In addition, Windows 3.1 offered standard multimedia support that was previously only available as part of the less popular Windows 3.0 with Multimedia Extensions 1.0 . In terms of graphics, color depths of up to 32 bits and large screen resolutions were supported with this version. Despite the similarity of names, many programs for Windows 3.0 are incompatible with Windows 3.1x (and vice versa).

At the same time, a hierarchical system database was integrated for the first time, the so-called Windows registry database , which is often colloquially called the registry . In contrast to later Windows versions, their use under Windows 3.1 is still limited to file name extensions and some Windows settings. As before, program settings and more extensive configurations are implemented using ini files (initialization files ) that contain the parameters and values ​​in plain text. These files can be changed with a text editor and can be easily copied, which means that system and program configurations can be easily transferred to other computers.

Windows 3.11 was released in February 1994. It differs from the previous version practically only through updated drivers. Microsoft provided a free update to update an existing Windows 3.1 to this version. With this version a certificate of authenticity was introduced for the first time ; a hologram that is difficult to forge allows the layperson to distinguish a copy from an original.

Windows 3.2 was released in December 1994 only in the People's Republic of China . This is an updated version of Windows 3.1 that included new input methods (IME) and other improvements. 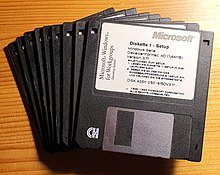 Windows for Workgroups 3.1 was released on October 27, 1992. It contained additional opportunities for the rudimentary first Windows peer-to-peer - network between Windows computers over the MS-own NetBEUI - protocol . The TCP / IP protocol was not yet supported with this version. The programs Microsoft Mail , a network-based mail program, and Schedule + , a calendar program for shared use by several users were available. Windows for Workgroups 3.1 supported standard mode ( 80286 processor), but file and printer sharing was not possible in this mode.

Windows for Workgroups 3.11 was released on November 8, 1993. It is an extended version of Windows for Workgroups 3.1 with improved 32-bit network software and TCP / IP protocol (to be installed later as an update), which allows several computers to communicate in a local network. With a package of smaller programs (" Winsocks "), Internet access is now also possible via a standard modem with AT command set (Hayes) and bit rates of 4.8 / 9.6 / 19.2 kBit / s. You can also access the Internet via ISDN or DSL . The last browsers for WfW 3.11 are: Internet Explorer 5.0 German, Internet Explorer 5.01 English, Opera 3.62 English and Netscape Navigator 4.08. Device manufacturers were able to license the Windows for Workgroups 3.11 operating system until the beginning of November 2008 .

There are numerous extensions for Windows 3.1, which above all complement the comparatively simple program and file managers or replace them with completely new interfaces, including PC Tools for Windows , Norton Desktop , Calmira or Plug-In for Windows .

The most important extension for newer programs is the Win32s interface for Windows 3.1x. This enabled the execution of 32-bit programs under the otherwise 16-bit Windows. However, the function libraries from Windows NT were not completely adopted, only a selection from them, for example MS Office 97 can run under Windows NT 3.51, but not under Windows 3.1x / WfW 3.x. In combination with graphic interfaces such as OpenGL or Video for Windows , however, this should set a sufficient standard for home users by the time Windows 95 appears.

Windows for Pen Computing is an extension of Windows 3.1x, which was designed for input using a light pen and was executed on tablet PCs . The operation was mainly characterized by the fact that it introduced functions such as trainable handwriting recognition and gestures . After Compaq had discontinued its plans to bring out a PDA based on this operating system in 1994, before the appearance of Windows 95, Microsoft decided to develop the next version for Windows 95 without the involvement of cooperation partners.

Windows 3.1 required at least an 80286 processor. The real mode, which was still included in the previous version and supported 8086/8088 processors, was no longer available in this version. An 80386 processor was required to run Windows for Workgroups 3.11

Windows 3.1 supported, at least theoretically, up to 512 MB of RAM in standard mode, but applications had to be compiled explicitly for this memory size. Most application programs, and Windows 3.1 in 386 enhanced mode, support up to 256 MB of memory.

With the introduction of Windows 95, support for Windows 3.1 from Microsoft and third-party manufacturers decreased. MS Office up to version 4.3, StarOffice up to 4.0, CorelDraw up to 5.0, MicroGrafx Designer / Picture Publisher 5, PaintShopPro 3.12 were supported. Due to the browser war , Internet Explorer 5.0 was released as a 16-bit version in 1999. Overall, the hardware support for SCSI is better than for IDE / Atapi .

In the world of Embedded PCs , for example in cash registers, the system was able to survive into the second half of the 2000s due to the low hardware requirements and simultaneous support of the TCP / IP protocol. Microsoft licensed Windows for Workgroups 3.11 to January 1 for device manufacturers November 2008.