The American Lee Barnes was Olympic champion ahead of his compatriots Glenn Graham and James Brooker .

The athletes had to jump a qualifying round on July 9th. The jumpers were divided into two groups. The required qualification height was 3.66 meters. The final for the qualified athletes took place on July 10th.

Note: The qualified jumpers are highlighted in light blue. 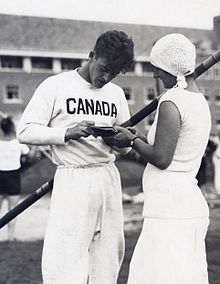 Seven jumpers, four of them from the USA, had made it to the qualification level. After the cancellation of the world record holder Charles Hoff due to injury , the US jumper Ralph Spearow was the favorite. But Spearow was out of shape on the day of the final and only finished sixth. Hoff could no longer do this sport due to an injury and therefore decided to switch to the middle distance. Here in Paris he was Olympic eighth in the 800-meter run .

There was a jump-off for gold and bronze. The only 17-year-old Lee Barnes was Olympic champion with 3.95 m ahead of the 20-year-old Glenn Graham. James Brooker won the bronze medal against Henry Petersen - both 3.90 m. The Olympic record of Frank Foss with 4.09 m of 1920 remained unchanged.

The victory of the just 17 year old Lee Barnes was the seventh US victory in the seventh pole vault final.

Athletics disciplines at the 1924 Summer Olympics