Austrian runners did not take part. The Swiss Josef Imbach made it to the final after setting an Olympic record in the quarter-finals, but fell here shortly before the finish. His teammate Christian Simmen dropped out in the preliminary run. German athletes were still excluded from participating in the Olympic Games.

The competition, especially the story of the winner Liddell, is the subject of the 1981 film The Hour of the Winner (OT: Chariots of Fire ), directed by Hugh Hudson with Ian Charleson in the role of Liddell and Edward Wiley as Fitch. The film was u. a. 1982 Best Picture with the Oscar awarded.

A special feature of this race was that the stadium lap in Colombes was 500 meters long. The runners started 100 meters after the finish line.

Note: The qualified athletes are highlighted in light blue.

Olympic record in the quarter-finals, but the Swiss Josef Imbach reached the final, but could not finish it.

Out in the quarterfinals for Luigi Facelli (ITA)

The Norwegian Charles Hoff fails in the semi-finals 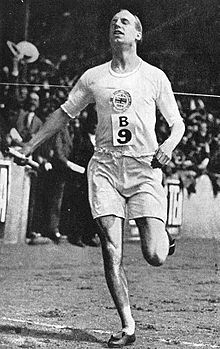 Eric Liddell's forte was actually the 100-meter run . But since the final of this sprint took place on a Sunday and Liddell, as the Scottish pastor, did not want to start on Sundays, he signed up for the 400 meters as well as the 200 meters . The Olympic record fell twice in the heats - the first by Swiss Josef Imbach in the sixth quarter-finals, the second by US runner Horatio Fitch in the first semifinals. Although the final took place two hours after the semi-finals, Liddell increased the world record to 47.6 s. He was in the lead right from the start and ran the first 200 meters in 22.2 seconds. Well behind, Horatio Fitch won the silver medal after a tough battle with Guy Butler.

Two runners had serious problems finishing the race. John Coard Taylor, who had already competed with a bandage, injured himself 30 m before the end and dragged himself to the finish. Josef Imbach stepped on the inside edge of the train, fell and was treated in the hospital. The jury officially put him in sixth place, even though he hadn't finished the race.

400 meters for the men at the Summer Olympics

Athletics disciplines at the 1924 Summer Olympics