The Pomeranian cuisine is u. a. known for their wide range of fish dishes, such as the cream herring shown with onions and fried potatoes, or the pickled Bismarck herring from Stralsund .

The Pomeranian farmers were self-sufficient, storing field crops until the next harvest, preserving meat products in the smokehouse in their own home or in smoke houses that were privately operated in larger villages (such as the village of Schlawin ). Fruit, vegetables, lard, and goose flavors were preserved by preserving them in mason jars. Syrup as a spread was made from sugar beet itself.

In the modern kitchen, the original Pomeranian peculiarities are often supplemented by new facets, old dishes are rediscovered and combined with current recipes.

Sea buckthorn berries are processed into a variety of products in Western Pomerania . In addition to liqueur and juice, there is also a. Jam . 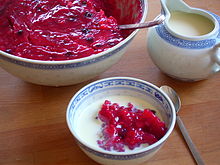 Red fruit jelly with vanilla sauce is a typical dessert in Pomerania.

In Western Pomerania there are several renowned restaurants in the 21st century that have received awards.

Among the star restaurants listed in the 2015 Michelin Guide are the restaurant freustil, run by chef Ralf Haug, in the Hotel Vier Jahreszeiten Binz on Rügen , André Münch's restaurant in the Stolpe manor in Stolpe (Peene) , the restaurant Tom Wickboldt in Heringsdorf on Usedom , and for the first time the gourmet restaurant Scheel's in the Scheelehof in Stralsund , under the direction of the Stralsund chefs Björn Kapelke and Henri Zipperling.

In its 2015 edition, the culinary guide Gault-Millau lists Knobloch's herb kitchen in Göhren on Rügen , headed by head chef Peter Knobloch, with 16 out of 20 possible points, as well as the Freustil restaurant under Ralf Haug in Binz. René Bobzin from the restaurant Zur alten Post in Bansin on Usedom and Tom Wickboldt from the restaurant of the same name in neighboring Heringsdorf were also awarded 15 points . Other restaurant guides such as the Varta-Führer , Bertelsmann-Guide , Der Feinschmecker and the Schlemmer Atlas attest the high quality of top gastronomy in Western Pomerania.

* is also part of Polish cuisine