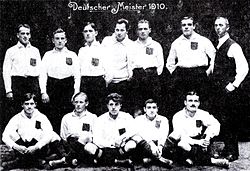 The South German and German champion
Karlsruher FV of 1910
with coach William Townley .

The competition mode remained unchanged compared to the previous season, teams competed against each other in four regional districts, the four district champions then played out the southern German football champions in a final round. The streamlining of the top southern German divisions, which had already begun in the previous year, was continued this year. In three out of four districts there was now a single-track A-class, the champions of which were qualified for the southern German finals. Only in the eastern district was played in two (instead of three) seasons. 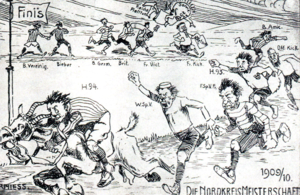 The creation of a single-track division with twelve teams, which was played in a double round, meant, on the one hand, an additional burden for the clubs in the northern district, since 22 competitive games now had to be played, and on the other hand, more income, which was used to expand and maintain the grounds. In the meantime, football had become more than just a pure leisure activity; the championship race was, as the cartoon on a postcard from Wiesbaden suggests, not only about points and titles, but also about money. The construction and operation of fenced sports fields, most of which had to be leased by the city, brought many clubs into financial difficulties. Frankfurt's FC Hermannia, for example, who was fourth in the Südmaingau squadron and the city's second largest football club in the previous year, had to give up the sails in 1910 because it had taken over the “Sportpark”, a square with a wooden stand in the Ostpark , which was built in 1906 . The grandstand with a capacity of 300 spectators was then bought by FFC Victoria and erected in its place on Eschersheimer Landstrasse.

In the league, seven teams came from Frankfurt, two from Hanau and one each from Wiesbaden, Offenbach and Bieber. Viktoria 1894 made the “race” for the first time this year from the old football stronghold of Hanau just before the strengthening SV Wiesbaden , which had a national player in its ranks in defender Otto Nicodemus. Last year's district champion Hanau 93 had to be content with fourth place.

This year, the eastern district was only divided into a northern and a southern season, the first and second of each season played the eastern district champions in a final round. Here the FA Bayern sat in the Munich SC , from the Englishman Dr. Hoer trained, in the end clearly through. In the league round, the toughest competitor and local rival MTV Munich 1879 was beaten 8-2 on November 21, 1909, and the team around goalkeeper Ludwig Hofmeister , center forward Fritz Fürst and right- winger Max Gablonsky remained undefeated in the Ostkreis finals . The SpVgg. Fürth was sent home 12-0 on January 25, 1910, against 1. FC Nürnberg there was a 4-2 win on January 16 on Leopoldstrasse and on February 6 in Nürnberg-Schweinau. The first national player from Bavaria was 1. FC Nürnberg; Striker Ludwig Philipp was used in two international matches on April 3 and 24, 1910, while Max Gablonsky, FC Bayern player, made his debut on May 16, 1910.

The official website of SpVgg Greuther Fürth gives a slightly different table position than Greens and Schulze-Marmeling for this final round. Obviously there is a difference in the outcome of a game between MTV Munich 1879 and FC Bayern Munich, and the goal relationships differ. However, this is insignificant for the outcome of the Eastern District Championship.

Participants of the four previous German championship finals from 1906 to 1909 as well as the later champions of this season were now gathered in the southern circle: the German champions of 1907 ( Freiburg FC ), 1909 ( Phoenix Karlsruhe ) and 1910 ( Karlsruhe FV ) as well as the runner-up in 1906 ( 1 . FC Pforzheim ) and 1908 ( Stuttgarter Kickers ). It should have been the strongest German league at the time. The Karlsruhe local rivals KFV and Phönix fought head-to-head for the southern district championship and were tied at the end of the season. Since the goal quotient did not play a role in this decision, a play-off had to decide on the championship and the entry into the southern German finals. In front of 5000 spectators, the KFV won this duel. Since FC Phönix, as last year's champions, was nevertheless qualified for the German finals, they met again in the semi-finals.

There was no relegation, the league was increased to ten clubs for the 1910/11 round. FV Germania Beiertheim was able to prevail in the B-Class and was promoted to the A-Class.

The teams from the Mannheim / Odenwald / Darmstadt area had been “repotted” again for this season: until 1908 assigned to the north and 1908/09 to the south, they were now playing in the western district, which until then had comparatively few members. The teams from Kaiserslautern and Ludwigshafen were left behind against the championship experienced Mannheim clubs, the Mannheim FG 1896 only lost two games (1: 3 against FC Pfalz 03 and 1: 2 at FV Kaiserslautern) and secured the West District title with a four point lead.

The results of four games are missing, but they may not even take place.

Final round of the southern German championship

After the Karlsruher FV in the southern district had only been able to prevail through a play-off against city rivals FC Phönix , there was no opponent in the southern German finals who could seriously endanger the team, the KFV won all six matches and qualified for the first time since 1905 for the final round of the German championship.

South German football championships from 1898 to 1933