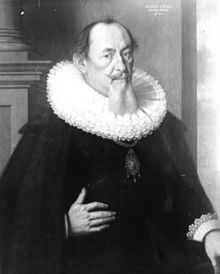 Sigismund Finckelthaus (born December 20, 1579 in Leipzig ; † September 12, 1644 in Dresden ) was a lawyer and rector of the University of Leipzig and mayor of Leipzig .

Sigismund was the son of the Leipzig councilor, mayor and lawyer Lorenz Finckelthaus (* around 1540 in Leipzig; † December 9, 1580 ibid) and his second wife Magdalena (born June 22, 1542 in Leipzig; † December 23, 1625 ibid), who Daughter of the Leipzig citizen and pharmacist Johannes Ralla and Magdalene Schiltner, daughter of the head of the barefoot monastery Johann Schiltner, born. From his father's first marriage he had half-brother Laurentius Finckelthaus . Since he had lost his father at an early age, his mother took care of his education. It was she who sent Sigismund to the municipal Nikolaischule .

In 1596 he began studying philosophy and law at the University of Leipzig, where Zacharias Schilter and Jacob Schmuck (1571–1599) were his formative teachers. He acquired the lowest philosophical degree of a Baccalaureus on March 5, 1597, moved to the University of Jena in the same year , where he mainly worked with Johann Suevius (Svuevius, Schwabe, Annaemontanus * 1564 in Annaberg; † December 13/15, 1634 in Jena) continued his studies. Returning to Leipzig, he registered on the advice of Zacharias Schilter as a candidate at the law faculty and on February 9, 1604 he became a Baccalaureus of Law.

In order to advance his studies further, he completed a literary scholar's journey in 1606, which took him to Speyer , as well as the universities of Heidelberg , Strasbourg , Basel , Nuremberg , Regensburg , Augsburg , Padua , Siena , Bologna , Venice , Florence and Rome . Back in Leipzig he was on January 29, 1607 Magister of Philosophy, on February 4, 1608 licentiate in law and graduated on March 30, 1609 as a doctor of law.

Finckelthaus also took part in the organizational tasks of the Leipzig University, so he became Decemvir of the University on April 23, 1622 , was a full professor of the Faculty of Law, was electoral Saxon council and in the winter semester 1615 rector of the Alma Mater , and in the winter semester 1623 he was the same important prorector. He also campaigned for the interests of his hometown. After he was accepted into the Leipzig council, he also became governing mayor on August 17, 1639 to 1642 for the first time until the end of his life.

He had participated in Saxon government business in Dresden in 1624 and in the state parliaments from 1631 to 1634. During the siege of Leipzig in the Thirty Years War , however, he had to endure many adversities. His health also suffered as a result. After struggling with asthma for several years , he traveled to Dresden where he suffered a febrile illness from which he passed away. His body was transferred to his hometown, where he was buried on August 22nd in the Paulinerkirche in Leipzig . A wooden epitaph was built for it.

Finckelthaus was married twice. His first marriage was on October 25, 1608 with Anna († September 4, 1637 in Leipzig), the daughter of the Leipzig wine merchant and councilor Abraham Dreher. From this marriage two sons and three daughters were born. After his first wife died, on June 14, 1638 he married Elisabeth Clauss, the widow of the Leipzig merchant Christoph Krumpholtz. It is known about the children:

His half-brother Lawrence was Assessor of Oberhof Court in Leipzig and received during the period of Reiser's troubles for a period of six years, the vocation to Stadtsyndicus in Lübeck .