The Societas incognitorum (full name: Societas eruditorum incognitorum in terris Austriacis , in the German edition of the statutes: "Society of those unknown scholars" ["in the Austrian countries"]) was a learned society in the sense of the Enlightenment in the late Baroque period . It was founded in 1746 by Joseph Freiherr von Petrasch in Olomouc , Moravia , and was the first of its kind in the Habsburg countries, with the exception of the Italian regions. Further scientific societies in Bohemia did not come into being until 1770 with the learned society and in 1784 with the Royal Bohemian Society of Sciences . 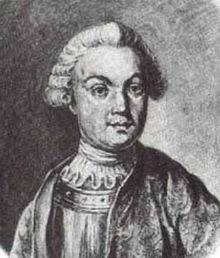 At the beginning of the 18th century, the idea of ​​founding scientific academies , which came from Italy, spread . The first efforts to implement this idea were made in Munich in 1720 and in Prague in 1744 . This could, however, there in the confusion of the Austrian Succession War are not implemented, so the out took Slavonia originating Joseph Freiherr von Petrasch that at the University of Olomouc philosophy and at the Leiden University had studied law and then adjutant of Prince Eugene of Savoy had been , took the initiative and founded a learned society in Olomouc in 1746. He also had the financial means to support this project privately. In 1747 the historian and Benedictine monk Magnoald Ziegelbauer from Swabia also came to Olomouc and first became a member and soon secretary of the Societas incognitorum . Other scholars quickly began to join the society or to enter into correspondence.

The Society gave itself a 32-point statute in Latin and German, which was approved by court decree on March 16, 1747, the only objection was that the meetings had to take place in public. From January 1747, the magazine Monathliche Auszüge Alt- und neue Gelehrten Dinge was published as the first scholarly literary journal in Austria that even received copyright protection.

The self-imposed goal of the society was the promotion of the sciences, especially the natural sciences, mathematics, numismatics, historical research as well as philology and literature. In the confessional conflict between Protestants and Catholics at the time, the Societas incognitorum had an open and pragmatic approach, and scholars from both camps participated.

In enlightenment thinking, society was influenced by the philosophical rationalism of Wroclaw-born Christian Wolff , by the Catholic reformism of the historian and scholar Lodovico Antonio Muratori from Modena, and by the school of critical historiography by Jean Mabillon .

Not all scholars were present on site in Olomouc, but took part as corresponding members, as is still the case today in scientific academies. The Ollmützer Monthly Excerpts from Old and New Scholarly Things , a journal published by the society, which, in addition to news from the field of science, also brought book reviews about newly published works, served you as a communication medium . In addition to the natural sciences, the magazine was also devoted to literature and linguistics, both German and Slavic.

In the 1740s, an intense dispute broke out in German-speaking countries about which form of German should become the new binding written language . The camps were divided into the Protestant north, which advocated East Central German Saxon and gathered around Johann Christoph Gottsched , and the Catholic south, which wanted to develop its Upper German writing language . The Olomouc learned society tended linguistically more towards Saxony - Gottsched himself was at times a member of the Societas incognitorum - ideologically, however, they were rather neutral. So you maintained contact not only with the German Society in Leipzig, but also with Parnassus Boicus in Munich, as of course with the scholars in Austria. Because of its Slavic and Italian members, the Olomouc learned society was unable to develop any national undertones, as was already being expressed in Prussia at this time, and thus had the role of an uninvolved observer. The Ollmützer Monthly Excerpts wrote about the beginning of 1750 about the conflict that broke out between the two grammarians Gottsched and Johann Balthasar Antesperg :

“Herr Antesperg writes for the Austrians. Mr. Gottsched for the Saxons, namely for the Upper Saxons, that's why it's not surprising, so everyone has a somewhat different kind of thing "

However, when the establishment of an academy was being discussed in Vienna and Gottsched was under discussion as director for it, Petrasch clearly took the side of the opposition that was forming among the scholars and wrote:

" Why should we finally accept Lutherans in Catholic countries, since they certainly do not suffer Catholics in a pulpit of the university or the court in Protestant countries ."

Franz Christoph von Scheyb, on the other hand, was one of the avowed Gottschedians in Austria and later heavily criticized Gottsched's successor as head of the German Studies Institute at the University of Vienna and massive opponent of his predecessor, Johann Siegmund Popowitsch . Scheyb calls this a “fool and language Hussite ” because he called for a special linguistic approach in Austria and southern Germany based on the local vernacular and rejected East Central German New High German .

Friedrich Wilhelm von Haugwitz put the plan to found his own Academy of Sciences on hold. This is often justified with the burdens of the eight-year War of the Austrian Succession, but the disagreement among scholars also contributed to this, as Johann Joseph Graf Khevenhüller , Chief Chamberlain of Maria Theresa, suggests in an expert report. In it he writes that such an academy should bring benefits for agriculture, for mining, industry and the coinage, but not "useless gimmicks".

The Olomouc Academic Society has a certain significance not only for the German language history in the late Baroque, but also for that of the Czech , Slovak and South Slavic languages . Joseph Freiherr von Petrasch, also written in Czech as Josef Petráš , was a Croat himself , came from Brod an der Sawe and, in addition to German-language texts, wrote numerous poems in the language of his homeland, which earned him the nickname "the Slavonian poet".

In addition, the Slovak Matej Bel was also a member of society, even though he wrote most of his works in Latin and thus did not have to choose one or the other vernacular. Overall, the Moravian Societas incognitorum thus stands for an early form of Enlightenment, which on the one hand already broke away from denominational thinking, but was still free of nationalisms and, in its composition and ideological orientation, committed to imperial patriotism that was not defined ethnically.

However, precisely this was the decisive point of criticism for the Enlightenment circles in Prussia, which were already heavily influenced by national chauvinism . For example, Friedrich Nicolai , one of the later main exponents of the Berlin Enlightenment , which replaced the Leipzig circles around Gottsched and surpassed them in radicalism, wrote in 1767 in a criticism of the German-language poems by Baron von Petrasch that appeared in Frankfurt am Main that same year:

" Herr von P. would have done it if he had rather written his poems in the Slavonic way; because the way he delivers them, they are neither Slavonic nor German. We hope our readers won't ask for any examples. Wretched Gottschedische germs, which are also un-German, we would have to present them! And is that worth the effort? "

In German historiography, the “cultural patriotic inspiration” of the Leipzig German Society is often held responsible for the emancipation of other European national languages, with reference to the role of the Olomouc Societas Incognitorum in the revaluation of Czech . It can be assumed, however, that it was the massive rejection by the Electoral Saxon and Prussian scholars' circles that provided the initiative to reconsider and expand one's own Slavic language and identity, thus laying the foundations for the nationality conflicts of the 19th century as early as the late Baroque.

The importance of the Societas incognitorum in Olomouc is closely linked to the biographies of the most important members, so that the learned society dissolved with increasing age and death. Some sources give their work only for the years from 1746 to 1752, which correlates with the publication of the Ollmützer monthly extracts of old and new scholarly things . In addition to the biographical reasons, the main reason for the dissolution was the relocation of the attractive locations for science in the Habsburg countries towards Vienna and Prague and the founding of the Churbaier Academy of Sciences in Munich in 1759. The Saxon scholars' group in Leipzig was also replaced by a new generation of Prussian enlighteners in Berlin in the 1770s .

Interestingly, in the Habsburg countries, the Enlightenment first caught on in the smaller provincial university towns, in addition to Olomouc in Innsbruck and Freiburg im Breisgau . But once the university in the metropolis of Vienna was reformed, it attracted all the prominent scholars of the region and the first cells lost their importance. Olomouc, which was officially allowed to call itself one of the imperial capitals in 1762, was later to lose its university, which Emperor Joseph II relocated to Brno . Innsbruck was demoted to a high school. Joseph Petrasch himself left the city in 1758, when Olomouc was besieged again by the Prussian army in the course of the Seven Years' War , and took over the management of the short-lived Imperial Franciscan Academy in Augsburg . Nevertheless, the Olomouc learned society was of great importance in the short period between the late Baroque and the Enlightenment, which, however, is still little explored in German-language research.

In contrast, science in the Czech Republic, Slovakia and Croatia has dealt more intensively with the Societas incognitorum, coming from different disciplines.