The St. Louis was a passenger ship put into service in 1895 by the US shipping company American Line , which was built for transatlantic passenger and mail traffic between Europe and the USA . At that time she was one of the largest passenger ships under the American flag. During the First World War she served as the USS Louisville (ID-1644) as a troop transport . After the end of the war she was supposed to be made afloat again for civilian passenger traffic, but burned out during the repair work in January 1920. Five years later it was scrapped in Italy .

The 11,629 gross register tons, steel- built steamship was built at the William Cramp and Sons shipyard in Philadelphia and was launched there on November 12, 1894. The ship, 169 meters long and 19 meters wide, had two masts , two funnels and two propellers . The cruising speed was 19 knots. The passenger accommodation was designed for 350 passengers in the first, 220 in the second and 800 in the third class. The St. Louis was the sister ship of the St. Paul (also 11,629 GRT), which was launched half a year after her at the same shipyard. 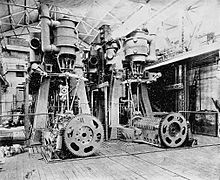 The St. Louis steam engine in the shipyard of William Cramp & Sons, 1894.

They were the largest ships of their shipping company until then and were among the largest ocean liners in the United States. The owner was the International Navigation Company , but both ships were operated by the American Line .

On June 5, 1895, put St. Louis in New York for its maiden voyage to Southampton from (England). The last tour on this route for the time being took place on April 16, 1898. The steamer was then used by the United States Navy under the name USS St. Louis as a troop transport in the Spanish-American War . The ship was armed with multiple cannons and put into service as a troop transport on April 24, 1898 under the command of Rear Admiral Caspar Frederick Goodrich (he also commanded the USS Newark in the same war ). On April 30, 1898, the St. Louis set sail with 27 officers and 350 men for the Caribbean . On August 14, 1898, she arrived back in Philadelphia, where she was prepared at her shipyard for passenger traffic, which she resumed on October 12 of that year.

In the following years the St. Louis was a popular ship on the North Atlantic route Southampton - Cherbourg - Queenstown - New York. In 1903 the ship got new boilers and the chimneys were also increased. From 1913 the St. Louis only carried second and third class passengers. On July 15, 1914, she left for her last trip on her original route. From July 31, 1914, it was no longer Southampton, but Liverpool . The St. Louis stayed on this route until April 1918. As early as March 1917, she was armed again with cannons due to the submarine war . On May 30, 1917, the St. Louis narrowly escaped torpedoing by a submarine in the Irish Sea . On July 25, 1917, there was shelling during another submarine attack.

On April 17, 1918, the St. Louis arrived in New York to be re-equipped for service as a troop transport. She entered service on April 24th with the designation USS Louisville (ID-1644), as the Navy already had a ship called the St. Louis (the USS St. Louis (C-20) ). The first mission was on October 12, 1918. Four weeks later the war was over. On January 7, 1919, the ship was back in New York. By August 19, 1919, the ship made six crossings between New York and Liverpool or Brest to repatriate American troops .

In the port city of Hoboken in the US state of New Jersey , the St. Louis was to be converted again for service as an ocean liner. But that didn't happen. On January 9, 1920, the ship caught fire and burned out. The wreck was abandoned and lay at various docks in New York Harbor for the next five years . In May 1924 it was towed by two Dutch tugs to Genoa ( Italy ), where it was scrapped the following year.