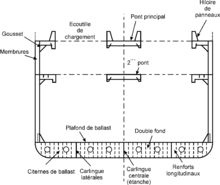 A cargo ship or general cargo vessel is a vessel in which all types of cargo to be transported. General cargo are loads that do not have standard dimensions, such as B. is the case with containers .

General cargo is, for example:

A general cargo ship (in the sea) has in the cargo holds tween decks , to make optimum use of the available space. A general cargo ship normally has its own loading gear in all holds so that it can unload its cargo even in smaller ports that do not have their own cranes .

The creation of a stowage plan (loading plan ) is essential on a general cargo ship . Depending on the size of the ship, the creation of the stowage plan is a demanding task due to the shipping area and the number of unloading and loading ports to be approached as well as different loads. The master , who is advised by a supercargo if necessary, is responsible for the cargo . On larger general cargo ships in liner service (express freight service), the captain delegates loading operations to his officers, with an experienced second officer (loading officer) usually taking on this role. Time and deadline pressures play an important role; therefore the cargo officer is supported by a third officer and, if available, by an officer assistant (sailor-OA), nautical officer assistant. When loading a general cargo ship, the loading officer has to consider a number of things:

To clarify, here is the excerpt from the ship's diary of MS Tannstein , 42nd voyage home, based on NY 09.01.66 …… “The cargo was well garnished by professional stevedores under the supervision of the ship's management and stowed according to seaman's custom. The cargo was lashed, lashed and braced. The Mc Gregor hatches were set down and wedged. " -

In the general cargo liner service, the same ports are called regularly; From the shore, the respective freight departments of the shipping company in the home port, while liner brokers and freight agents (waterclerk) abroad take care of the rapid processing of the ship, whereby one can assume long-term contacts. This group also includes the stevedoring with their army of skilled port workers who load a ship under the guidance of experienced foremen (Viez). It is the task and duty of a cargo officer to maintain a good and trusting cooperation with this group of people.

The loading operation on a typical general cargo ship can be clearly seen in the adjacent photo from 1959. In addition to the tank , which is being hoisted on board, you can see tree trunks / logs on both sides of the fore ship as a deck load. On the deck are wood hatch cover , hatch beams , an amount of dunnage to Seefest making the charge, cordage and wires. You can see open hatches and extensive loading gear that is operated by dock workers .

For decades, general cargo ships have handled almost all of the cargo transport involved in world trade .

An example of the conventional design of general cargo ships were those of the Tannstein class . Amidships were the superstructures with the navigation bridge , the saloon and the living rooms for the captain , officers, passengers and crew. In front, under the forecastle , were the cable arm with lamp room and the nautical workshop. Aft was the steering gear and in a deckhouse the laundry and the workshop of the on-board electrician. - Ships with a raised stern, midships and aft superstructures are also called “three-island ships”.

Depending on the client's requirements and wishes, a conventional general cargo ship could also look different. The ships of the Rendsburg Nobiskrug shipyard with the bridge structure amidships and the engine, the crew quarters with kitchen and provisions rooms aft are mentioned here as an example ; see MS bleaching .

General cargo ships of the old design had the engine room aft and living quarters amidships. The latter was advantageous for people on board: calm and almost vibration-free in good weather, less movement of the ship in a storm.

The most famous general cargo ships of the old design include the Liberty Freighters , a unit ship used by the Americans during the Second World War . General cargo ships transported everything that could be loaded into the holds with cranes.

Modern general cargo ships only have one structure (usually at the stern ). The navigating bridge, the living and common rooms and the engine room are combined here.

In the field of sea freight, container traffic has established itself for almost all cargoes in question. However, a small niche has remained, namely the area of ​​project and heavy lift transport (see also the article on heavy lift carriers ). This means all goods that are too big, too bulky or too complicated to be loaded onto container ships, e.g. B. machines, cranes, components, aircraft technology, tanks, turbines , complete power plants and prefabricated systems and factory parts. In the case of very heavy, very unbalanced and / or very sensitive parts, the correct stowage and securing on board can be very complex.