The "most famous ball in history": The Duchess of Richmond's ball on June 15, 1815, on the eve of the Battle of Quatre-Bras and three days before the Battle of Waterloo (painting by Robert Alexander Hillingford ). 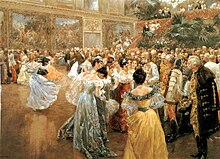 Ball in the Vienna Hofburg around 1900, dancing to the Viennese waltz (painting by Wilhelm Gause ) 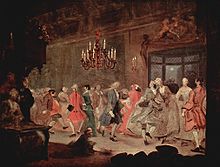 A (dance) ball - also called a festival ball , ball night (due to the time at which it takes place) or dance festival - is a festive social dance event for a mostly selected audience.

The dance ball used to be an important element of the marriage market for upper classes . Young women appeared at debutante balls for the first time as adults, marriageable persons. Today balls serve, among other things, the purpose of seeing and being seen.

However, many simple dance events in the “ fifth season ” are now also called ball . In addition to such carnival balls , which - as is usual with other balls - are attended in evening attire , so-called costume balls often take place, for whose attendance it is usually mandatory to wear a costume . In Austria there is the term Gschnas for such events .

In the German-speaking world, a dance festival was initially called Dantz . It was not until the 18th century that the word ball caught on for public dance pleasure. This was already adopted from the French in the 17th century . The local word bal is a derivation from the verb baller (to dance), which itself goes back to the late Latin ballare (to dance, to hop).

Historically, a ball was held in a ballroom . Grand houses often had their own dance house. (This is not to be confused with the ball house in which the ball was played. In addition, the term “ball”, meaning “game ball”, is not related to ballare in terms of linguistic history .)

Nowadays, Vienna is considered the capital of the ball . In the Austrian capital, over 400 balls with more than 200 visitors take place every year. ("In total, an estimated 300,000 visitors will shake their legs at Viennese balls.")

In addition to the well-known big balls, numerous schools, professional groups, various clubs and social associations as well as individual districts organize their own balls every year. In the official Viennese ball calendar, for example, there is a “Ball of the religious teachers” and the “Ball of the Floridsdorfer Wasserrettung”. There is also a “homeless ball”, a “asylum seekers' ball” and a “red carnation ball”. The " Life Ball " shows that today the term "ball" is used a little wider than in the traditional sense. The event framework and clothing deviate from the usual guidelines, especially for the latter, according to the motivation for the event. In Germany, for example, the ball of the stars corresponds to this broader meaning of ball . As a rule, however, all balls have in common that it is an annual festive event to which one does not appear in everyday clothes; one often prepares for it at great expense and attends the ball with the sure intention of dancing.

A ball takes place in the evenings. A garden party that should turn into a ball in the garden can start at 5 or 6 p.m. with a little refreshment. A buffet ball typically starts at around 8 p.m. The exact start time is not exactly determined and depends on the season (festive mood more after sunset) and the occasion. The start time of a wedding ball often has to be coordinated with the other dates of the ceremony and the subsequent travel plans of the bride and groom.

The Austrian ball season is the Carnival from 11 November to Shrove Tuesday . Most balls take place during this period, even more crowded from New Year's Eve and after Epiphany on January 6th. Especially in this core time, hardly a day goes by in the Vienna ball season without at least one ball taking place somewhere in the city.

Invitations are designed differently depending on the social status of the event. A traditional fire brigade ball in a village, for example, is usually inviting by means of notices and newspaper advertisements. The flair of a noble ball includes a personal written invitation, usually by means of printed invitation cards - for upscale occasions often also on handmade paper .

Big social balls like the Vienna Opera Ball or the Frankfurt Opera Ball have more complicated invitation formalities. Particularly prominent personalities (first-class celebrities , real VIPs) are often paid for their participation in high-level events in order to give the ball shine. People assigned to the A-list are formally asked to participate in order to enhance the event without incurring any costs. Celebrities are often offered cards to buy together with a polite pseudo invitation. Non-celebrities can "buy-in" with generous donations to the institution that the ball wants to support. Such a donation often has to be made several times over a period of years before receiving a pseudo-invitation and a card offer, usually limited to two pieces. Relationships can be decisive here, which is not considered disreputable in this context. Because good social relationships indicate a corresponding social position, the consolidation and improvement of which is a goal of such elitist balls. Sponsors of such events also receive a ticket contingent and award it according to their own criteria, for example to good business partners.

A written invitation is usually sent no later than two to three weeks before the ball and indicates the desired clothing as well as the occasion.

The invitation to the ball usually notes for men in ascending order of the required "cleaning":

The first two points are to be understood literally. “Social clothing” stands for tuxedo or tailcoat , and for uniforms also the (gala) uniform . A suit is absolutely undesirable in such cases. If available, the corresponding medals and decorations are worn.

The degree of “cleaning” required for the women can be derived from the information given for the men and from the occasion. For example, at a private summer ball, where a dark suit is required for men, a light, long summer dress can be sufficient for women. In formal dress , however, there is a refined, floor-length ball gown. Jewelery, if available, is also worn. Celebrities appear with borrowed jewelry or clothes and show them on behalf of the owner or manufacturer.

The guests are greeted with a drink according to the occasion. The exact further course of a ball depends on the shape and occasion. If there is a buffet, it opens around 11:30 p.m. In the case of a more festive ball, there can be a so-called ball supper at the beginning of the ball: a neat, late dinner at festively laid tables.

At a ball, dancing is the core of the event. The fact that permanent dance couples are rather undesirable is a rule of courtesy. When it comes to large balls, strolling , seeing and being seen are at least as important.

As a basic rule, when the social ball is closed, anyone can dance with anyone else. The host couple, the wedding couple, the debutants or certain celebrities opens the ball with the first dance. As a guest, you first dance with the partner you came with or with the assigned table gentleman or table lady. In the case of a small ball, the hostess will be asked to do the second dance, if the situation allows it.

So-called midnight interludes are common with many balls. This is an interruption of the ball flow in the form of special performances for the general public. Today performances by a dance school , a magic show, a ballet interlude or, as an exotic contrast, a samba show and the like are common. The shape of the midnight insert is intended as a surprise for the guests.

In the case of balls with a raffle , the prizes will be drawn afterwards.

Many young people visit over a period of time a weekly dance class , so take lessons in ballroom dancing . At the end of the course there is a festive dance ball (in Germany often also called prom and final ball ), to which the parents are invited and where what has been learned is applied and shown. You appear in festive clothes. The event often also includes a polonaise or a dance game. But a dance ball can also be part of other dance courses in which a certain program of dances is learned. In some places there is a middle ball before the prom . The middle ball is intended as a dress rehearsal of the dance course for the prom (final dance).

A prom is held on the occasion of completing school education or university studies. In the year of the baccalaureate (or in Austria and Switzerland, the Matura ) is in Germany (colloquially) the prom , in Austria the Maturaball and Switzerland the Matura Ball visited. In Austria, the ball almost exclusively takes place before the final school exams in the ball season. A uniball takes place as an annual event at universities . 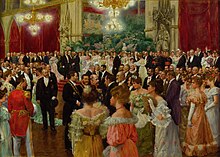