Tiamat is a Swedish band that is one of the founders of Gothic Metal . The project is named after the primeval goddess Tiamat , who plays a central role in Babylonian mythology . 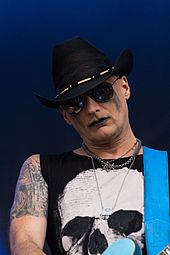 Tiamat emerged from a band with the controversial name Treblinka , which referred to the Treblinka extermination camp . Two demos and a single were released under this name . At this time the band, whose founding members Johan "Hellslaughter" Edlund and Jörgen "Juck" Thullberg were and to which Stefan "Emetic" Lagergren and Anders "Najse Auschwitzer" Holmberg belonged, could be assigned to Black Metal . In 1989 Johan Edlund changed the band's name to Tiamat; In 2008 a one-time reunification concert took place in which the twins Erik "Tyrant" and Per "Hellbutcher" Gustavsson (both near Nifelheim ) helped out. With a new line-up, they first recorded a single .

The first album Sumerian Cry was released in 1990 on the Metalcore label, all subsequent albums until 2007 on Century Media . In 1991 Tiamat toured with Unleashed , for the 1992 album The Astral Sleep Edlund split from Lagergren and Holmberg, who turned to the death-doom band Expulsion . The 1992 line-up also did not last and the 1993 album Clouds was recorded with a different line-up and promoted with another change in personnel on a tour with Unleashed and Morgoth . Edlund hired former Sorcerer bassist Johnny Hagel for the tour . In June 1993 Tiamat recorded Sleeping Beauty - Live in Israel in Tel Aviv and released the EP the following year. The Tiamat, increasingly attributed to the up-and-coming Gothic Metal through The Astral Sleep and Clouds , gave further concerts with Paradise Lost and Voodoocult . In 1994 the band shrunk to a duo and Edlund took Wildhoney with Grip-Inc. Guitarist Waldemar Sorychta . The album, which was clearly influenced by Pink Floyd , was marketed by a US tour with Type O Negative and supplemented by a single whose B-side included the Pink Floyd song When You're In . In 1995 Tiamat went on a UK tour as support for Black Sabbath . 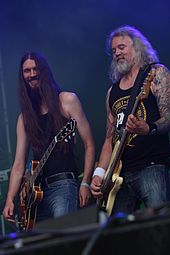 Roger Öjersson and Anders Iwers at the Rockharz Open Air 2014

In the course of the band's history, almost all positions have been filled several times, while the band made further tours with other popular interpreters of similar musical characteristics such as Anathema and Tristania . In the meantime, Tiamat was no longer a real band, but rather a solo project by Johan Edlund, who lived and worked with his German partner in Dortmund . Johan's partner has taken over vocal parts in some pieces. Edlund now lives in Thessaloniki in Greece , and despite the distance to his Swedish music colleagues, the band structure has become more solid again. Apart from Edlund, who is still responsible for most of the songwriting in addition to vocals, guitar and keyboards, Anders Iwers (bass) and Lars Sköld (drums) were involved in the last releases, who also play the live tour program as a permanent cast . Thomas Wyreson (guitar) was added in 2006.

In June 2007 Tiamat signed with the German label Nuclear Blast . The album, entitled Amanethes , was released there on May 2, 2008. Also in 2008, The Ark of the Covenant , a box set containing all of Tiamat's albums and singles that appeared on Century Media, as well as the DVD The Church of Tiamat contains. In the fall of 2008, Wyreson left the band. In 2012 the band released The Scarred People, a new album that, according to Johand Edlund, was more “velvety” than its predecessor Amanethes .

In spring 2014, band founder Johan Edlund announced that he would be leaving Tiamat mainly for health reasons. Although he will still play the concerts announced for summer 2014, he will no longer be part of the band as a singer and guitarist afterwards. Edlund made it to the remaining band members Iwers, Sköld and Öjersson to continue the band without his participation. In June 2015 Johan Edlund announced on Facebook that there should be a continuation of the band with his participation.

While the Treblinka recordings and the debut Sumerian Cry were more typical Black / Death Metal recordings of that time, The Astral Sleep with choirs, keyboards and sometimes undistorted guitar parts were clearly on their way into independent musical territory. For Edlund, however, the newer albums can still be classified as Black Metal because of the lyrics. On Clouds melodies and atmospheric sounds moved even more into the foreground, a departure from Death Metal of the earlier days was already evident here, influences from Gothic Rock were clearly audible.

On the fourth album Wildhoney , the atmospheric Death Metal was enhanced by nature noises (such as birdsong) and psychedelic elements. In the trade press, comparisons were often made to Pink Floyd , and Edlund himself stated that he and bassist Johnny Hagel were based on bands like Pink Floyd and King Crimson ; When You're In , the Gaia single also features a Pink Floyd cover song. The death metal elements were consistently scaled back with the successful album Wildhoney and have not been available since the follow-up album A Deeper Kind of Slumber . In contrast, exotic instruments were sometimes used on A Deeper Kind of Slumber . A sitar played by Sami Yli-Sirniö can be heard on the album . In addition to his usual parts, Johan Edlund also uses a theremin on this album .

After the very experimental phase of A Deeper Kind of Slumber , characterized by psychedelic and spherical influences, the music of Tiamat changed to a mixture of Gothic Rock and Gothic Metal; the style on the successor Skeleton Skeletron is more reminiscent of bands like Joy Division and The Sisters of Mercy than of Pink Floyd.

Today Tiamat counts together with z. B. Paradise Lost to the founders of the music genre Gothic Metal.

On the album Amanethes , the band picked up again black and death metal influences.

Johan Edlund openly confesses to Satanism in interviews . His statements on the meaning and content of Satanism for himself differ greatly from one another: in 1992, at the time of the Clouds album , he called the upturned crosses “symbols. They do not mean that I am a devil worshiper , drink blood and sacrifice virgins . ”He has been wearing the upside-down cross since his youth, which was then directed against society. “When I mention ' Satan ' in my texts, it is just a word that can be interpreted in different ways. The devil as the dark side of me - and God as the light side. ”“ On Clouds I also deal with the light side, because I'm not only 'bad'. ”Later Edlund expresses himself differently: For him, Satan is representative of them Truth, he compares his views on the human core with those of Aleister Crowley . Tiamat set his poem The Pentagram to music on the album Prey , on which other content also relates to Crowley.