Verner Panton (born February 13, 1926 in Gamtofte near Assens , † September 5, 1998 in Copenhagen ) was a Danish architect and designer . He was one of the first to introduce Pop Art into the world of furniture and gained international fame through his designs for furniture, lights, textiles and interior design. He is considered to be one of the most influential furniture and interior designers of the 20th century.

Panton was the son of a restaurateur and studied from 1947 to 1951 at the Technical University in Odense and the Royal Danish Academy of Art in Copenhagen , studying color psychology. From 1950 to 1952 he worked as an assistant in the design studio of the architect Arne Jacobsen . During this time Panton was involved in the design of the Ant , the most famous chair by Arne Jacobsen. Panton set himself apart from the style of the time with soft shapes and natural materials: he preferred artificial materials. After two years he left the Jacobsen studio and Denmark. From 1952 to 1955 he traveled across Europe in a VW bus that had been converted into a drawing office . Here he gained important impressions and contacts with manufacturers and dealers were established. In 1955 he opened his own design studio and initially devoted himself mainly to designing chairs. In 1955, with the first series production in collaboration with the furniture manufacturer Fritz Hansen, he brought out the Bachelor's Chair and Tivoli Chair and designed a weekend house that could be dismantled, which could also be used as a garage. In 1958 he caused a worldwide sensation for the first time with the Wire Cone Chair.

For the Thonet brothers in Frankenberg he developed the cantilever chair S, a cantilever chair made from one piece of plywood bent under steam pressure, and experimented for several years with applying this principle to plastic. For his first experiments he used rigid polyurethane foam. 1959/60 he succeeded with the styrene copolymer Acrylester-styrene-acrylonitrile (ASA), the design of associated with his name Panton Chair , the first monobloc was marketed -Freischwinger of plastic.

In 1963 Panton moved to Basel and began working with the furniture manufacturer Vitra . In 1967 Vitra had the new material under control and began series production. The Panton Chair helped Verner Panton achieve his final breakthrough and led to worldwide fame. He was also involved in the creation of fabric designs.

During this time his departure from the Scandinavian design traditions became evident. While designers such as Hans J. Wegner and Børge Mogensen had success with natural materials and craftsmanship in the 1950s, which was considered the golden age of Danish design, Panton preferred to use plastic, rubber, foam and steel - his designs were “statements against the establishment. " 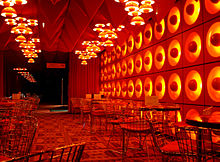 Among other things, he designed the interior for the Hotel Astoria in Trondheim in 1960 , and in 1969 the interior for the Spiegel publishing house in Hamburg, from the swimming pool in the basement to different colors on each floor and the canteen. Only the Spiegel canteen and the “snack bar” remained in their original style after an extension in 1998. When the publishing house moved to a new building in Hamburg's Hafencity at the end of 2011, parts of the snack bar were installed in the new building. The rest of the facility was transferred to the Museum für Kunst und Gewerbe Hamburg , where it is partially shown as a period room .

In 1970, the Varna restaurant in Århaus was redesigned and the Visiona II residential landscape in Cologne was made from various foams, which he installed on an inland ship on the Rhine on behalf of Bayer AG for the Cologne furniture fair. In 1974 he took over the furnishing of the Gruner & Jahr publishing house in Hamburg. In 1984 the renovation of the circus building in Copenhagen was carried out with his color concept. Also in 1984 he took over a visiting professorship at the Offenbach am Main University of Design .

Although Panton won several design awards, he was gradually losing importance as early as the 1970s. The reason is the oil crisis , which meant "the end of the uncritical use of plastic". It experienced a revival in the mid-1990s, for example, in 1995, Vogue magazine featured Kate Moss sitting on a Panton chair on the front page. In 1998 Verner Panton died shortly before a planned retrospective at the Trapholt Art Museum in Kolding , on which he himself had worked.

Panton's designs were prototypical for the psychedelic designs of the 1970s and were often more of a spatial sculpture than an object of daily use. He used clear colors from across the spectrum of the rainbow. In the 1980s he experimented with geometric shapes. He was fascinated by the possibilities of the new types of plastics, which, due to their lack of structure, gave him complete creative freedom in terms of shape and color. Panton loved to experiment with colors and materials. Among other things, he created the first inflatable plastic furniture.

Above all, his vision was the complete fusion of functions and spatial units. Furniture ensembles should ultimately still be usable when turned upside down. He “found the idea of ​​stepping into a living room paralyzing and knowing exactly where and in what position to spend the evening there.” His goal was also to completely remove the traditional three-way division of the room of floor, walls and ceiling. Panton's legendary interior design concepts can be seen as the zenith of his work.

"In contrast to many other Danish designers, he took a revolutionary, non-evolutionary approach to design and in the course of his career created highly innovative, daring and playful designs that often used the latest technologies that reflected his optimism for the future." Fiell, p. 545.

His oeuvre can best be described by a quote from Verner Panton himself:

“The main purpose of my work is to encourage people to use their own imagination”.

Already during his studies, Panton was concerned with the idea of chairs without back legs . In 1955 Panton showed the first drafts of an S-shaped chair, still made of teak . The further development of plastics enabled him to reconsider the concept. The decisive factor was the new, curved design of the foot section, which completely eliminated the need for a standing plate and also created additional legroom. What made the Panton Chair so extraordinary was not just its extravagant design and color, but above all that it was made from a single piece of plastic. This impressively demonstrated the possibilities that these new materials offered.

However, the technical difficulties were great: The first model made of polystyrene was not yet stable enough to sit on, the first series models made of lacquered fiberglass-reinforced polyester (1967) and rigid polyurethane foam (from 1968) were far too expensive to produce. In 1970, the manufacturer Vitra changed the material again, but the inadequate load-bearing capacity of the solid-colored Luran S used over time led to the chair breaking and as a result, in 1979, to the temporary cessation of production. Due to the sustained demand, production of the model from 1968 was resumed in 1983, and in 1999 a second, significantly cheaper version of the Panton Chair made of polypropylene came onto the market.

The Panton Chair is not only undoubtedly Panton's most famous work, it is also one of the most important chairs of the 20th century.

Panton always strived to redistribute the "living space" apartment. He particularly pursued the idea of ​​structuring the living space vertically in order to better adapt it to high-rise buildings. His "Pantower" clearly shows these elements and the willingness to experiment of the 1968s. The division into four levels of different heights opens up a multitude of new seating and lounging options.

At the Cologne furniture fair, Panton presented his design for a visionary, colorful living area. The individual room components lose their original function and flow together to form a single, higher-level room. Clear distinctions between sitting and relaxation areas are no longer possible in the cave-like space.

The Pantoflex series, manufactured by VS Vereinigte Spezialmöbelfabriken in Tauberbischofsheim , produced the first school chairs that were tailored to the ergonomics of children.

Verner Panton was honored by the city of Weil am Rhein in which a path near the Vitra Campus was named after him. On it is a work of art by Dieter Thiel called "Hommage à Verner Panton", it is a row of 12 monochrome columns in the typical Panton colors. The Verner Panton Weg is now part of the Kunstweg 24 Stops from the Vitra Campus to the Fondation Beyeler .