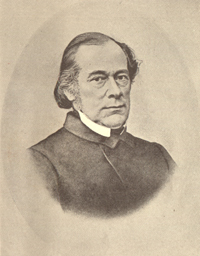 Huber was the son of the writer couple Ludwig Ferdinand Huber and Therese Huber , geb. Heyne, used Ranger. After the early death of his father, he was sent as a foster son to Philipp Emanuel von Fellenberg in Hofwil near Bern at the age of 6 . Fellenberg, Pestalozzi's former friend , was about to set up an educational institution for the sons of the higher classes, in which Victor Aimé Huber was the first pupil to receive his education. In 1816 he left the institution prematurely in a dispute with Fellenberg and moved to Göttingen to live with his mother's relatives. Here he studied medicine and also conducted language and literature studies.

In 1820 Huber received his doctorate in Würzburg. med. with the aim of settling down as a practicing doctor in Bavaria and enabling the widowed mother to have a carefree retirement. But first he traveled to France, Spain, Portugal, Scotland and England in 1821 and published travelogues that appeared in the Morgenblatt für die educated stands, a widely read supplement to Cotta's Allgemeine Zeitung .

Huber did not return to Germany until 1824 and tried to complete his medical degree at the University of Munich . He failed due to the disapproval of the examiners and fell through the exam in 1825. Huber interpreted this as a sign of fate, abandoned the unloved medicine and concentrated entirely on publishing political articles - first with Cotta, then as a freelance journalist - for which he made further trips to France and England.

Since Huber did not earn enough money writing to provide for his mother, he took a position as a teacher of history and modern languages ​​at the commercial school in Bremen in 1828 , and later at the old grammar school in Bremen . In 1830 he married Auguste Klugkist, the daughter of the Bremen Senator Hieronymus Klugkist . In 1832 he became professor of the new and occidental languages ​​in Rostock , 1836 in Marburg and 1843 professor of literary history and editor of the conservative journal Janus in Berlin . In 1852 he resigned from the civil service and settled in Wernigerode am Harz, from where he worked as a privateer and cooperative expert.

Huber was baptized Catholic following his father's denomination , without ever feeling that he belonged to the Catholic Church. For him, the guiding principle did not grow out of religion, but rather out of political liberalism .

That changed when Huber had to realize on his travels that the ideal of liberalism could only be very imperfectly realized; In addition, his socially insecure position meant that he was unable to provide for his mother. Therese Huber died shortly before he could bring her to Bremen , which Huber did not use throughout her life. Out of this life crisis, Huber converted to the Reformed Church . The turning point had been prepared through contacts with important representatives of the revival movement , but also through connections with the reformed senatorial family Klugkist. Since his conversion, Victor Aimé Huber saw himself as a pious, church-loyal, Protestant Christian who relied on the Bible and the creed . The center of his faith was the doctrine of justification , which is why he grew more and more into the Lutheran Church over the years .

As a Protestant Christian, Huber was also involved in church issues. As one of the first outside Hamburg, he publicly promoted Johann Hinrich Wichern's Rauhe Haus , which he visited shortly after it was founded. Even before the Wittenberg Kirchentag, Huber campaigned for the Inner Mission in the Janus ; When this company began to flourish after 1848, it was excluded from the design, not least due to its controversial political reputation. Huber remained an avid supporter of the Inner Mission and gave lectures on the cooperative system at some church days ; his friendship with Wichern lasted until 1862.

In Janus of 1847, Huber reported in detail on the negotiations of the first general synod of the Evangelical Church in Prussia , the resolutions of which, however, fizzled out in the upheavals of the March Revolution .

Together with Friedrich Julius Stahl , Ernst Wilhelm Hengstenberg and Ernst Ludwig von Gerlach, Huber worked in the Evangelical Association, a branch of the Gustav Adolf Association . The association published Christian writings at affordable prices, as well as an illustrated book of the Gospels and a widely published picture Bible, the motifs of which were selected by Huber. His aim was to reach working families with Christian educational content.

As a student, Huber was enthusiastic about the ideals of liberalism , which he saw above all in the realization of a free constitution made by the people . In search of this ideal, he traveled through France , Spain , Portugal and Great Britain , all of which were constitutional states during this period .

From 1830 onwards, Huber tended increasingly towards conservatism with a monarchical character and ultimately categorically rejected constitutions for German states. In 1842 he wrote the first conservative party program in Germany when the conservatives were still far from seeing themselves as a party . This engagement earned him a call to the Berlin University , where he was wanted mainly as the initiator of a conservative magazine to be newly founded. As editor and lead author of Janus magazine . Yearbooks of German Education, Minds and Deeds , which appeared for the first time in 1845, got Huber politically between the two fronts: as a monarchist and pietist, he was the enemy par excellence of the liberals and socialists ; his strictly anti-constitutionalist, monarchist conservatism also proved to be incompatible with the political convictions of the leading Prussian classes, so that the actual co-thinkers opposed him. The ideal and financial success of Janus was correspondingly modest and turned into a loss for both the Prussian government and Huber.

When Prussia became a constitutional state in the course of the March Revolution in 1848, Huber discontinued Janus, withdrew as far as possible from political journalism and devoted himself entirely to the social question . In 1852 he took his leave from Berlin.

From childhood on, Huber's mother and foster father Fellenberg exemplified the social responsibility of the upper classes for the lower classes. Huber was only able to meet this responsibility when, as a professor, he found himself in secure material circumstances. He founded infant care centers and sewing schools in Rostock and Marburg. His efforts initially remained entirely within the framework of the then usual charity .

On a research trip in 1844 (the same year as Engels ) Huber wandered through the residential quarters of factory workers in Manchester . It became clear to him that poverty was not an individual fate, but that the workforce threatened to ruin an entire section of the population. To counteract this development, Huber propagated a concept for housing cooperatives in 1846 under the title "Inner Colonization". According to his plan, cottage settlements were to be built that would provide the working class families with sufficient living space, which, in addition to the material livelihood, also enabled a regular, Christian family life. Over time, the workers should become apartment owners through rent payments and thus secure their financial position. Furthermore, Huber planned to connect the tenants to an organic community through various (Christian) educational institutions. He wanted to generate the necessary capital from the sale of shares. Huber's call to found, finance and manage the housing cooperatives went solely to those who were financially and ideally better off. He could only imagine active participation by the workers themselves if they had been trained by the elites to help themselves through life in the cooperatives.

Huber's socio-political ideas were to some extent put into practice. From 1849 to 1852 he was on the board of the liberal Berlin non-profit construction company, which built six small houses for 15 families on the property at Schönhauser Allee 58 / 58a. The settlement called Bremer Höhe was supposed to become a prime example of “inner colonization”, but (in its early form) did not last long. In 1888/89 the last, meanwhile neglected, cottages were demolished and made way for new, denser development.

With his idea of ​​a cooperative, Huber is one of the intellectual pioneers of the cooperative movement in Germany. Its importance lies less in its practical work or a theory than in its activity as a multiplier. He tirelessly collected information on trips to Belgium, England and France, which made him a leading expert on the European cooperative system, which was particularly well respected abroad. He published the information obtained in countless articles and brochures as well as at conferences.

During his lifetime, Huber did not get any noteworthy response in Germany. He did not succeed in systematizing his theories in a closed main work, which made reception difficult. In addition, with his Christian-conservative cooperative plans, Huber literally stood between the chairs of all relevant socio-political currents of his time: the conservatives were too liberal with the concept of cooperatives, the liberals were too conservative-monarchistic, the socialists too paternalistic-reactionary and political Catholicism allowed Protestant.