Weesenstein is a central part of the municipality of Müglitztal in the Saxon Switzerland-Eastern Ore Mountains district . The place is 14 km as the crow flies southeast of Dresden city ​​center . He is famous for the Weesenstein Castle of the same name . 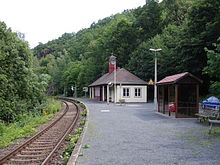 In terms of its settlement form, Weesenstein is an estate settlement with rows of houses. The place is located in the approx. 30 meter deep Kerbsohlental , on the left bank of the Müglitz , which flows north. The castle is located on a rock spur that protrudes from the east into the valley and forms the characteristic loop of the river. The place is accessed by the state road 178 and the Müglitztalbahn .

The place is about 175 meters above sea level . The Feuersteinlinie runs here , the line of the furthest penetration of the northern inland glaciation in the course of Kreischa - Cottaer Spitzberg .

Weesenstein was first mentioned in 1318 as Weysinberg and was then written as Hus . In 1436 Wesenstein / Weißenstein is known as castrum and is under the care of Dohna , later to the office of Pirna .

The manor was at the Weesenstein manor, which is documented between 1551 and 1858.

Weesenstein was shaped by agriculture and handicraft. The Weesenstein shoe factory was known in GDR times.

Weesenstein was devastated by the flood in the Eastern Ore Mountains in 1927 and the August flood in 2002 , and several houses were completely destroyed. In a dramatic rescue operation, residents trapped by the flood had to be rescued by helicopter.

The castle has a baroque garden south of the castle in the valley area.

Connected to the village of Weesenstein

Districts of the community of Müglitztal