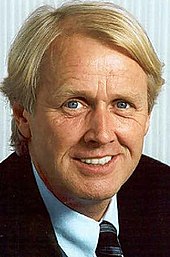 Werner Bruns (* 1954 in Hameln an der Weser ) is a German sociologist and author. He is married to the political scientist and author Petra Bruns, with whom he has a son.

Werner Bruns studied sociology and social psychology at the Bergische Universität in Wuppertal , where he did his doctorate with a thesis on juvenile prison systems . During his studies he was funded by the Friedrich Naumann Foundation (FNSt). Today Bruns works at the foundation as a liaison professor and member of the selection committee for the promotion of talented students . In 2014 he was awarded the Friedrich Naumann Medal.

Werner Bruns was assistant to Hans-Hermann Hoppe (today Professor of Economics at the University of Nevada in Las Vegas) and scientific director of the Ludwig-von-Mises-Institut, whose theses about the justifiability of the norms he rejects, however, because they are not involved the principles of critical rationalism and the logic of political liberalism are compatible. Hoppe is now one of the leading scientific minds of the libertarian movement in the USA. Bruns later worked as a research assistant , then as head of studies at the Rudolf von Bennigsen Foundation in Hanover . From 1987 to 1996 he was a consultant for labor market policy in the Lower Saxony Ministry of Social Affairs. Bruns worked in the Baden-Württemberg Ministry of Economics from 1996 to 2009 , most recently as head of the principle and medium-sized business departments. From 2009 to 2014 he was Head of Department Z and Political Director in the Federal Ministry for Economic Cooperation and Development. Bruns heads the Steinbeis company in Cologne, Bonn, Bad Neuenahr and is honorary professor , course director and senior fellow at the Rheinische Fachhochschule Köln (RFH). The sociologist works at the RFH as head of the " European Institute for Experience and Management-METIS ", a research alliance of international universities. a. the course "Digital Transformation Management" on behalf of RFH at the Neuss location. Institut-METIS was awarded the "Hochschulperle" of the "German Stifterverband der Wissenschaften" in 2017 and 2020. Bruns was a lecturer at the Heinrich-Heine-University Düsseldorf (Institute for Political Science), at the Ruprecht-Karls-University Heidelberg (Institute for sociology), at the University of Applied Sciences Esslingen am Neckar and the Cooperative State University in Ravensburg (media department). Werner Bruns is a lecturer at the Rheinische Fachhochschule and the University of Cologne.

From 1994 to 1996 Werner Bruns was a member of the principle commission of the FDP , which, under the direction of Guido Westerwelle, formulated the Wiesbaden principles , the party's second basic program after the Freiburg theses from 1972.

The sociologist is a member of the board of trustees of the "Flexible Working World Foundation" in Berlin. He is a founding member of the association “Education against Poverty in Colombia e. V and was from 2003 to 2013 board member of "Project Chance", a model project of the state government of Baden-Wuerttemberg for juvenile prison. "

Werner Bruns is a founding member of the “Liberal-Democratic Laboratory”, an association of professors. The initiative was formed in 2018 out of concern for liberal democracy, it is non-partisan, based on the principles of liberalism, which has its roots in the Enlightenment.

Werner Bruns coined the term " social crime " in 1993 and founded it on sociological theories of deviant behavior. Social crime ( English: social crime ) refers to the abuse of state welfare or social services, analogous to white-collar crime , insofar as these the tax or subsidy abuse includes. In addition, Bruns has developed a performance system for politics, which should ensure that politics becomes what it has long been, a profession. The problems of social and state complexity, according to one of his theses, can no longer be solved by the existing political system in a promising way. For Bruns this can also be seen in the increasingly shorter half-life of political reforms. According to the sociologist, it is only possible to compensate for the resulting deficits through performance-related restructuring. In addition, he advocates a radical reform of democracy, which u. a. provides for the right to stand for election at federal and state level only at the age of 30 so that parliamentarians can gain professional experience outside of politics. The sociologist advocates - analogous to the idea of ​​the social market economy for the greatest possible diversity - for civil society's right to freedom of competition. The democracies should acknowledge their civil society, but at the same time involve them through a “creative chamber” so that the governability of a country is ensured and not hindered. As for companies, says Bruns, compliance systems are also indispensable for NGOs. Bruns introduced the term "homo buerocraticus", a special form of homo sociologicus , the type of scientist who is increasingly becoming a state-controlled subject due to bureaucratic rules and obligations. For him, the bureaucracy problem is very closely related to the expansion of law. The separation of powers in Germany has become obsolete.

In his last book, Bruns deals with the 68 generation who, according to his thesis, are facing a second revolution, the age revolution . This generation comprises around 8 million people who are about to leave the workforce and will radically change their age. This generation includes Hermann Otto Solms , Joschka Fischer , Gerhard Schröder , Daniel Cohn-Bendit , Uschi Obermaier , but also Uschi Glas , Peter Gauweiler , Iris Berben and Edmund Stoiber . As in the sixties, all areas of society are affected by the age revolution. Co-authors of the work are the author Petra Bruns and Rainer Böhme, head of the communications department at Zeppelin University in Friedrichshafen / Lake Constance. The sociologist assumes that the departure of the 68 generation will not remain without consequences for society. With their withdrawal, society threatens to lose important protection against fascist thinking.

The sociologist deals with the possibilities of transferring the know-how of the so-called “digital natives” to the upper management of large companies. The project sponsor is the "European Institute for Experience and Management-METIS". The pilot project is called "jung.digital.innovativ" and is used to explore suitable transformation strategies in companies. In a reverse mentoring program, top managers are brought together with students for training in digital techniques and media. The young adults coach the managers.