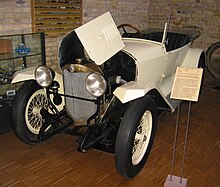 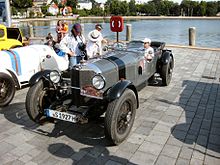 Willy Walb began his career in 1914 as an engineer in the aircraft engine department at Benz & Cie. In the early 1920s, he moved to the racing team's testing department . For this he also competed in races and won the overall classification of class I at the Baden-Baden automobile tournament in October 1921 in a Benz 6/18 hp . He was also involved in the development of the Benz teardrop car , which he also drove a number of times. Walb won the 1925 Schauinsland race in the sports car class with a displacement of up to 5 liters .

In the summer of 1926, Benz & Cie. and the Daimler-Motoren-Gesellschaft to Daimler-Benz-AG . On September 12th of that year, Willy Walb won the sports car class with a displacement of more than 5 liters on the newly presented Model K at Rund um die Solitude in Stuttgart. At this race, Mercedes racing director Alfred Neubauer for the first time practiced a system of signs that, with the help of flags and information boards, allowed detailed communication between the pit and drivers and a precisely planned sequence of pit stops . At the 1927 German Grand Prix for sports cars at the Nürburgring , which ran over a race distance of 509.4 km, Walb came third behind his teammates Otto Merz and Christian Werner in a Mercedes-Benz Type S, thus completing the triple victory.

This triple success was repeated at the German Grand Prix of the following year . On July 15, 1928, the Nordschleife was extremely hot, so that the drivers replaced each other in their SS types . Christian Werner brought Rudolf Caracciola's car to the finish line in first place, Merz came second and Walb and Werner came third.

After that, Willy Walb worked for a while as an assistant to Mercedes racing director Alfred Neubauer.

In the 1934 season , the Chemnitz- based Auto Union started its involvement in international Grand Prix racing with a works team and Walb was hired as race director. The team used to composed by Ferdinand Porsche resulting Type A , a, of a sixteen-cylinder - V-type engine with 4.4 liter displacement and charging by a Roots blower disposal and in a novel mid-engine was constructed -construction. Hans Stuck and Hermann zu Leiningen acted as drivers , August Momberger and Wilhelm Sebastian were reserve pilots. On July 15th, Stuck won the first major race for Auto Union at the Nürburgring with the German Grand Prix . Later, Stuck won the Swiss Grand Prix in Bremgarten and the Masaryk Grand Prix in Brno .

In October 1934, after the end of the season, Auto Union held an inspection course with twelve new drivers on the north and south loops of the Nürburgring. Participants included Paul Pietsch , Bernd Rosemeyer , Rudolf Steinweg , Hans Soenius and Otto Ley . Pietsch and Rosemeyer were the fastest and were selected by Walb as pilots for the coming season. Especially the former motorcycle racer and DKW -Werksfahrer Rosemeyer proved to be a very good choice and won already in 1936 on the type B , the Grand Prix Championship for Auto Union.

The Auto Union racing department headed by Willy Walb started the 1935 season with the Type B, a Type A that was improved in 56 points and increased to 4.9 liters of displacement. Hans Stuck and Hermann zu Leiningen continued to act as drivers, as did the Italian new signing Achille Varzi . Reserve pilots were Paul Pietsch and Bernd Rosemeyer, who were selected in autumn of the previous year. Momberger, who had a difficult relationship with Walb, and Sebastian, who did not consider himself fast enough for the European Championship, were no longer considered, but continued to work for the company in other functions.

The season was not very satisfactory for Auto Union. Stuck won a single European Championship run with the Italian Grand Prix in Monza . Varzi won the non-European Championship races for the Grand Prix of Tunisia and the Coppa Acerbo and Rosemeyer won his first victory at the Masaryk Grand Prix. In the overall standings of the European Championship, Mercedes-Benz celebrated a triple victory with the new W 25 and the drivers Rudolf Caracciola, Luigi Fagioli and Manfred von Brauchitsch . This was followed by Tazio Nuvolari and René Dreyfus's Alfa Romeo . As the best Auto Union driver, Stuck was tied with Dreyfus, Rosemeyer followed in seventh place in the final standings and Varzi was ninth.

On September 1, 1935, Auto Union hired Karl Otto Feuereissen as the new head of his racing department. Although Walb was assured that he would keep the technical management of the department and attend all races as an appraiser of the board, these promises were reversed in December 1935. Willy Walb was transferred to the Chemnitz-Siegmar plant , where he was supposed to complete the development of the Wanderer W 25 K. In addition, he was denied the payment of contractually guaranteed bonuses and an appropriate wage compensation. Walb suffered a nervous breakdown and felt like a scapegoat for the bad exit in the 1935 season, but vehemently denied guilt. After the end of the 1935 racing season, he never had anything to do with the Auto Union racing department again.

On February 1, 1936, Willy Walb moved to the Auto Union government department in Berlin , where he was head of the technical field service. He looked after prominent drivers in the ministries, as well as in the party and armed forces offices . He also kept in touch with the weapons testing departments of the Army Weapons Office and with the Wehrmacht driving schools and paramilitary organizations, and dealt with deployment vehicle matters. Walb remained an employee of Auto Union until it was dissolved shortly after the Second World War .