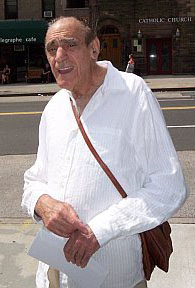 Abe Vigoda was born in Brooklyn in 1921 as the son of two Jewish emigrants from Russia , Lena and Samuel Vigodah . Already in his youth he worked as a theater actor and later played in several Broadway productions. He gained fame as a film actor with his role as gangster Sal Tessio in the mafia epic The Godfather from 1972. Although his character dies at the end of this film, he can be seen again as Sal Tessio in a flashback of The Godfather - Part II . He later played Detective Sgt. Fish in the US television series Barney Miller , for which he was nominated for an Emmy in 1976, 1977 and 1978 . Then he played in its spin-off Fish . Previously, he had a few appearances on the ABC TV soap Dark Shadows .

Vigoda appeared regularly as himself on the NBC show Late Night with Conan O'Brien . In 2006 Vigoda took over again the role of Tessio in the video game of The Godfather . Vigoda played his last role in 2014 in the movie Sweet Destiny .

Vigoda experienced a life-threatening situation in 1999. On American Airlines Flight 180 from San Diego to New York City , a compressed air line exploded in the passenger cabin. Oxygen masks were lowered and the plane made an emergency landing in Palm Springs . He and five other passengers were listed as "slightly injured".

The actor has been married twice and has been widowed since the death of his wife Beatrice Schy in 1992. Abe Vigoda died on January 26, 2016, aged 94, at his daughter Carol's home in Woodland Park, New Jersey .

In 1982 Abe Vigoda received additional media attention when the American People Magazine incorrectly declared him dead. Vigoda took this mistake with humor and had himself photographed sitting in a coffin with the magazine in hand. After there were further false reports of his death later, his accidental death became a popular running gag in America . In May 2001, Greg Galcik created the website abevigoda.com, which indicated whether Abe Vigoda was currently alive or dead. In 2002 Greg Galcik recorded the song Abe Vigoda's Dead ("Abe Vigoda is dead"), a parody of Bela Lugosi's Dead by the gothic rock band Bauhaus . In 2004, programmer Bob Vesterman brought out the "Abe Vigoda Status" extension for the Mozilla Firefox web browser , so that the Firefox status bar shows whether Vigoda is dead or alive. This extension became known, especially after it was published on the fark.com website. The unexpectedly high traffic caused Vesterman's website to crash. The extension is no longer available and not functional since 2006. The website for the PC game They Came From Hollywood , a game known for constant delays, used Abe Vigoda's status to indicate to fans whether or not developments in the game were canceled.