The title of this article is ambiguous. Further meanings are listed under Aschinger (disambiguation) .

Aschinger was a gastronomy company founded in Berlin in 1892 , which was particularly known for its large standing beer halls. The name is associated with a success story that had never occurred in this dimension in the German Empire before 1900. At times, Aschinger was Europe's largest catering company.

Founding and development until the 1920s

The hall of the Aschinger- Weinhaus Rheingold , 1906

The brothers August and Carl Aschinger , who immigrated from Oberderdingen in what was then Württemberg , founded "Bierquellen" in Berlin from 1892 onwards. These were standing beer halls and later also restaurants where you could eat quickly, well and cheaply. The different types of beer were initially offered at a unit price of 10  pfennigs . The first “Bierquelle” opened on September 1, 1892 at Neue Roßstraße  4 on Köllnischer Markt by the Märkisches Museum underground station . Others followed in busy places such as Leipziger Strasse (numbers 60/61, 79, 85), Potsdamer Strasse ( Weinhaus Rheingold ) in no.3 as well as numbers 57/58 and 101/102 as well as Friedrichstrasse (numbers 79a, 97 and 191), at Rosenthaler Platz ( Rosenthaler Straße 72a), Alexanderplatz and Hackeschen and Werderschen Markt .

At Aschinger, there were inexpensive meals and , if desired, rolls with the dishes, which made the name Aschinger popular relatively quickly, especially among poorer sections of the population. Aschinger's beer sausages and pea soup were particularly well-known and popular . "Best quality at the cheapest price" was the motto of the rapidly expanding company, which produced all dishes in its own central operation, thus having complete quality control . Further pastry shops and bakery outlets were added at the beginning of the 20th century. The establishment of the restaurants should by no means look poor, but rather elegant, which is why the beer springs were lavishly equipped with chandeliers , mirrors and inviting shop windows. Despite the lavish interior , they were not cozy, neither in terms of furnishings nor cleanliness. In the first half of the 20th century, the standing beer halls were considered “typical of Berlin”.

From 1905 Aschinger - meanwhile converted into a stock corporation - entered the hotel business together with the construction of the Rheingold wine house ( Potsdamer Straße  3; from 1937 No. 8) near Potsdamer Platz . The luxury hotel Fürstenhof and the palace hotel were acquired by 1913 . In the years 1924 to 1926, Aschinger AG also acquired the majority of shares in the Berliner Hotel-Gesellschaft and Hotelbetriebs AG. In addition, she took over the catering operations of the Deutschlandhalle . 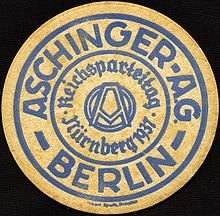 Aschinger Drink Coaster from the Nazi Party in 1937

In the 1930s, the network of Aschinger “beer springs” grew to 30 bars. These were distributed throughout Berlin's urban area.

With the Nazi regime, the company worked closely (as for example on the Reich Party Rallies Aschinger beer served). In the course of the expropriation (“ Aryanization ”) of the Kempinski Group, Aschinger also took over the Fatherland family from Kempinski.

The numbers correspond to the numbering of the restaurants carried out by the company. In individual cases, especially after the end of the Second World War, the facilities were obviously renumbered.

Since 80 percent of the Aschinger restaurants were destroyed in the Second World War , it was difficult to start over. In 1947, the German Treuhandstelle for the administration of confiscated goods from war criminals and exposed fascists took over the administrative center, which was now in the Soviet sector on Saarbrücker Strasse. The branches in the eastern part were assigned to the newly emerging HO after the expropriation . 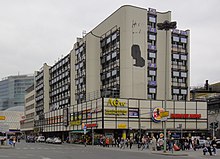 The building called “Aschinger-Haus” at Joachimsthaler Strasse 1–4, which also housed the Hertha BSC football club's popular “ Holst am Zoo” fan bar until it closed on December 27, 2010. The Aschinger was previously only in a one-story low-rise building at the intersection. The left part of the complex was called the Leineweber House.

The successor company to Aschinger AG opened its first pastry shop after the Second World War in West Berlin in 1949 near Wittenbergplatz . The company then grew back into a medium-sized company, which ceased to exist on October 1, 1976 with the closure of the last branch in the Aschinger-Haus at Joachimsthaler Straße 3, near the Zoo train station . In April 1990, with the participation of a member of the former Aschinger family, “Aschinger's Historischer Braukeller” was opened on Kurfürstendamm , which went bankrupt in 2000 and then closed again.

The restaurants later trading under the name Aschinger have no connection with the original company.