The BG Teubner Verlag was a German publishing house for research, teaching and practice in the field of classical studies, construction, engineering, mathematics, science and computer science. It was founded on February 21, 1811 by Benedictus Gotthelf Teubner (1784–1856) in Leipzig and in the 19th century developed into a world-renowned scientific publisher. In April 2008 he was integrated into the newly founded company Vieweg + Teubner Verlag .

BG Teubner Verlag is also known for its achievements in the field of school and related literature. He was one of the publishing houses of the mathematical student library .

Benedictus Gotthelf Teubner. From a publisher's edition with a modern reproduction of a representation by Teubner from around 1811; Leipzig 1911

BG Teubner Verlag emerged from Weinedelschen Buchdruckerei Leipzig. The print shop was founded in 1791 by Johann Christian Otto. At the beginning of 1806 Otto went bankrupt and his printing house, which consisted of two wooden hand presses and two tons of writing, was for sale by the Leipzig City Court. Teubner's brother-in-law, Johann Carl Weinedel, who was not a trained printer, was not allowed to run a printing business due to the strict guild law at the time. Nor could he establish himself in Leipzig. Nevertheless, the city and the guild allowed him to take over. Either this was due to the unfavorable time conditions or they were actually happy to find a buyer for the company. From June 1806 Teubner was responsible for the printing company. When J. C. Weinedel died in 1808 at the age of 33, the printing business continued unchanged. According to the guild laws, the heirs had the right to let the printing works continue for three years, and in fact Teubner was already as good as the head of the printing works. Weinedel's widow died a year after her husband, so that Teubner now had to run the J. C. Weinedel's heirs for the underage children, whose guardian he was also. When the concession period for the heirs expired, Teubner took over the printing company on February 21, 1811. 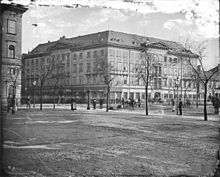 After the wars of liberation (1813–1815) against Napoleonic rule came to an end, the boom in the German publishing book trade also benefited Teubner's book printing company. The staff increased from around 10 people in 1806 to more than 70 employees in 1819. After ten years of business, Teubner was able to move into the large Teubner office building he had built on Augustusplatz in Leipzig, where he moved into the 11 wooden premises in 1821 Hand presses comprehensive book printing. Before that, he had also set up the second Teubner book printing company for F. A. Brockhaus , because he was not a qualified book printer and was not allowed to set up his own book printing house under his name , which was operated under this company from January 18, 1818 to October 21, 1821 for the account of FA Brockhaus existed and was then taken over by Friedrich Brockhaus and continued under his own name.

The increasing number of orders from important publishers at home and abroad, the printing of the Leipziger Zeitung since January 1, 1831 , the printing of the Börsenblatt for the German book trade since its inception and the company's own publishing house made a permanent increase in typographic aids necessary. The business premises of the new house were soon no longer sufficient and a new large office building at Poststrasse 3 in Leipzig had to be moved again.

In 1839 these new rooms took over all branches of business. At that time, the print shop comprised two high-speed presses and 25 mostly iron hand presses, along with the necessary equipment for the printing techniques that were customary at the time and cultivated by Teubner, for congreve (colored printing), gold, silver, colored and letterpress. In addition, an engraving institute , type foundry, stereotype and xylographic institute were connected with it.

Teubner carried out another new building on his property in 1852, so that it now consisted of four buildings he had built, enclosing a courtyard in a square, two of which were set up as apartments and rented business premises.

In addition to the Leipzig business, Teubner had also set up a printing press on Marienstraße in Dresden in 1832 , in which the negotiations of the Saxon state parliament, the Dresden hymn book, the official Dresden journal and many other tasks for the highest and highest authorities of the Country were printed. The reputation of his typographical achievements, recognized by awards at various industrial exhibitions, spread far beyond Germany's borders, so that in the cantata assembly of German booksellers, Easter Fair 1856, the chairman, Veit from Berlin, said: “Teubner grew up from small beginnings worked up, he knew how not to let the view of the whole thing dull and atrophy through the most faithful care for the business detail. In this way he was able to unite all branches of typographic activity in his printing press and develop them to a level of perfection that has earned the products of his presses a European reputation. "

The publishing bookstore founded by Teubner was hardly less important than the printing press. As early as 1824 Teubner began to publish a collection of Greek and Latin classics, which, gradually reaching the size of around 80 volumes, found much approval and widespread use at the time. It was followed by a number of other articles, mostly of philological content, such as the yearbooks for philology and pedagogy founded in 1926 at F. Passow's suggestion . But the printing business took up Teubner's activities and resources to such an extent that he was unable to give the publishing house a larger expansion. An association with F. Claudius for the publishing bookstore that began on January 1, 1831 and now traded as B. G. Teubner & F. Claudius , was dissolved again on December 31, 1832, without having any significant influence on any major development of the publishing business to be.

On April 1, 1842, Eduard Koch, Teubner's brother-in-law and later son-in-law, joined the B. G. Teubner company. Under Koch's influence, the publishing business turned primarily to the then flourishing trend of popular booklet literature, illustrated writings and fiction , and a number of partly significant works in these areas mark this period of the Teubner publishing house.

Later, the originally pursued scientific direction came into its own again, and with the Bibliotheca scriptorum Graecorum et Romanorum Teubneriana , a new collection of text editions of the Greek and Latin classics, started in 1849 , a new era in the publishing business began. This collection, which gradually grew to 170 volumes and surprisingly quickly found its way everywhere where humanistic studies were pursued, was initially followed by a number of important writings, primarily in the field of classical philology and ancient studies, alternating with some important works other branches of science, namely theology, mathematics, history, and medicine.

Teubner's enterprising spirit seemed to increase with his years. He willingly went into large and difficult undertakings himself, even if he could only expect the amortization of his investments in the distant future. While the publisher's catalog from 1824 to 1847, i.e. for a period of 24 years, only contains around 200 titles, in the years 1848–1860, halfway through that period, around 500 articles were published by the publishing company BG Teubner, which are almost always important obtained for science or for teaching.

On July 1, 1854, Koch withdrew from the business for health reasons. In contrast, Albin Ackermann-Teubner , also Teubner's son-in-law, took over the management of the Dresden branch in 1853 , while a third son-in-law, Adolf Roßbach, had supported the Leipzig business. United with them, Teubner worked until October 1855. He died on January 21, 1856 without a male heir. The business in Leipzig and Dresden went to Albin Ackermann and Adolf Roßbach, who continued the same under the old company in the spirit and spirit of their founder.

Reading room in the Berlin office

After the death of the company founder, the Teubner publishing house expanded not only through numerous own ventures, but also through the purchase of the Gotha library Graeca cur. Jacobs et Rost and the entire publishing house of the now extinct company Ebeling & Plahn in Berlin, including part of the E. Leibrock publishing house in Braunschweig , which was previously acquired by this company, and some articles that were currently published in the Fleckeisen'sche Buchhandlung in Helmstedt .

In March 1872 August Schmitt became a partner in the publishing house and on July 1, 1875 Arthur Roßbach became a partner in all of Teubner's shops in Leipzig and Dresden. In more recent times the publishing house has also been active mainly in the fields of philology and classical studies, teaching materials for higher schools and mathematical and technical sciences.

The direction of the publishing activity moved almost without exception in the fields of philology, mathematics, natural sciences, pedagogy and commercial sciences.

Teubner's printing shop had its own type foundry , electroplating and reproduction facility and, since 1905, a bookbindery .

In 1908 a total of 870 people were employed in the individual companies. The publishing bookstore accounted for 154, the technical operations 566 and the Dresden printing company 150 people. In the technical operations, 50 high-speed letterpress presses and around 100 auxiliary machines were installed, for which the power of two steam engines with 3,200 HP and two dynamos with 2,830 amperes were supplied.

In 1933 the company had around 700 employees, mainly in the textbook and printing sectors.

In December 1943 the graphic works and the publishing house were destroyed in a bomb attack.

After the Second World War, on January 30, 1947, a new limited partnership was established in Leipzig , in which Teubner-Buch-GmbH and Teubner-Redaktions-GmbH became personally liable partners.

After the expropriation in 1952, the management of the publishing house moved to Stuttgart and also opened a Teubner publishing house there . In 1969 it was merged into the Munich-based group of companies Giesecke & Devrient , which emerged from the old Teubner family as a securities printing company .

The Leipzig branch had to accept a state majority stake from 1958 and then traded under the name of BSB B. G. Teubner Verlagsgesellschaft (BSB BGT).

In February 1991 the Stuttgart publishing house B. G. Teubner founded a wholly-owned subsidiary called B. G. Teubner Verlagsgesellschaft mbH in Stuttgart. This acquired Teubner KG in Leipzig in April 1991 and relocated its headquarters to Leipzig. The Leipzig company was merged with BG Teubner GmbH in Stuttgart in 1998, after which it was only run as an operating facility and closed in 1999.

In 1999 the Teubner Verlag in Stuttgart was sold to Bertelsmann Fachinformation ( Julius Springer Publishing Group ) and moved to Wiesbaden . Since they were only interested in the technical science area, the antiquity and humanities section with around 700 titles went to KG Saur Verlag .

The publishing house and its 600 titles were sold together with Springer Science + Business Media in April 2003 to the British private equity companies Cinven and Candover .

In April 2008 the publisher was merged with Vieweg Verlag , which also belongs to the GWV Fachverlagen (now Springer Fachmedien Wiesbaden ) .