The Banggai cardinalfish ( Pterapogon kauderni ), also known as the Moluccan cardinalfish , is a black and white drawn cardinalfish that grows to eight centimeters and lives only in a very small area east of the Indonesian island of Sulawesi in the shallow sea. He is as ornamental fish for marine aquariums become known and seawater aquarium after the epithet simply kauderni called.

The Banggai cardinalfish only live in a small area around the Banggai Islands : Banggai, Bandang, Kembongan, South Peleng and other small islands. The entire area covers an area of ​​only 5500 km². Since the fish in this area only occurs in sheltered, isolated bays on the weather-protected side of 30 islands, the actual distribution area has an area of ​​only 34 km².

Banggai cardinalfish live in very shallow water in sea ​​grass meadows , associated with the sea grass Enhalus acoroides , in mangroves , lagoons and coral reefs . They even inhabit estuaries with freshwater inflows and docks polluted by sewage. They prefer depths of half a meter to 4.5 meters. The water in their habitat is very warm at 28 ° C to 31 ° C.

New habitats have been colonized by specimens that have escaped from fishing stations. There is a small population in the port of Luwuk on the eastern peninsula of Sulawesi; another population is found 400 km further north in the Lembeh Strait near Sarena Island off the coast of North Sulawesi. This population comprised around 50 fish in September 2000 and around 650 in June 2001. It had grown so much by 2010 that the numerous Banggai cardinalfish colonized almost all symbiotic anemones and diadem sea urchins and displaced the anemone fish and snipe fish that originally lived there .

Swarm in a natural biotope

In the wild, Banggai cardinalfish live together in groups of up to 500 animals, with most of the specimens being juveniles from six months of age. On average, the groups with a little over 20 individuals are significantly smaller. The large eyes show that they are active at twilight. They are zooplankton eaters who mainly snatch copepods , small decapods , sea lice, and eggs and larvae from various marine animals. Stomach examinations showed the size of the food to be 0.1 to 14 millimeters. Copepods make up 79% of the food they eat.

Young Banggai cardinalfish from one to 1.5 centimeters in length keep themselves in groups of two to twelve fish to protect themselves between the spines of diadem sea urchins ( Diadema setosum ), the tentacles of anemone mushroom coral ( Heliofungia actiniformis ) or symbiotic anemones of the genus Stichodactyla or from bubble anemones . Adult animals also hide in hard corals , such as acropores , Montipora digitata , Seriatopora hystrix or fire corals ( Millepora sp.). When counting, 43.7% of the animals lived with stony corals, 31.9% with sea urchins and 24.4% preferred the protection of anemones. They share their habitat with various other cardinalfish, damselfish , pipefish and the anemonefish Amphiprion clarkii , Amphiprion perideraion and Amphiprion ocellaris . 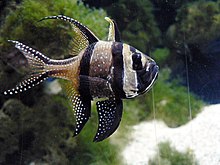 Like all cardinal fish are the Kaudernis mouthbrooders . Courtship is initiated by the female by constantly swimming under the male's tail. This can happen hundreds of times in a few hours. Since the males, as the mouth-brooding parent, invest more in the offspring, they have to be “persuaded” to spawn. The actual spawning act only takes seconds. After the eggs have been handed over, there is a long courtship, which usually lasts 30 to 40 minutes, but can also last almost an hour. Both partners swim around each other and turn around, trembling. The eggs may be inseminated at this point.

A brood consists of 5 to 40 orange eggs with a size of 2.5 to 3 millimeters, which are held together by filaments of their chorion. The males, who carry the eggs around in their mouth in a mucous membrane pocket for about 19 days, do not eat anything during this time. The fry do not have a larval phase , but hatch and develop for another 6 days in the father's mouth without metamorphosis (the size of the embryos is around 6 millimeters, when they leave the mouth they reach a length of 8 millimeters). This is unique with the cardinalfish and almost all other coral fish. After leaving the mouth 25 days after ingesting the egg, the fish no longer take care of the offspring, not even if they are in danger. The lack of a planktonic larval phase in which the larvae can be displaced by currents is probably the reason for the fish's limited range. After four months, the fry usually reach a size of 30 millimeters and are sexually mature after another 5–7 months.

The Banggai cardinalfish was discovered in 1920 by the Swedish ethnologist Walter Alexander Kaudern (1881–1942). He caught two specimens which he sent to the National Natural History Museum in Leiden . There they were described by Frederik Petrus Koumans in 1933 and named after their discoverer. The species was then forgotten until it was noticed by a diving tourism entrepreneur who sent photos to ichthyologist Gerald R. Allen . He initially believed in an unknown species, until he discovered that the holotype of the cardinalfish was in Leiden. In 1996, in Tropical Fish Hobbyist magazine , Allen introduced the type to the interested public.

The systematic position of Pterapogon kauderni within the cardinalfish (Apogonidae) has not yet been clarified. Because of the external similarity, the species is assigned to the Sphaeramiini tribe together with other high-backed cardinalfish .

The Banggai cardinalfish was discovered for marine aquariums in Germany in 1996 when the animals were exhibited at the Interzoo trade fair in Nuremberg . Immediately a run on the fish started and soon the first breeding reports appeared. That was all the more sensational as the breeding of seawater fish is extremely difficult or even impossible with almost all other species because of their tiny larval stages and the difficulty of finding suitable rearing food.

The Kauderni behaves completely differently in the aquarium than in nature. Usually he gives up his group life above a certain size and from a number of bought fish only one pair remains in a normal-sized aquarium. The others are fought and killed over time, or die stressed out in some hiding place. It is only possible to keep large groups of over 20 animals in very large aquariums (from 2000 to 3000 l).

As aquarium dwellers, Kaudernis are rather boring, usually stand quietly in the water near a cover and only become active when there is food. They mostly only eat live and frozen food , hardly any dry food . They do not participate in any interactions that are typical of coral fish, including between different species, and are largely ignored by alien fish themselves.

In the last few years the mortality rates of wild-caught caudernis have increased enormously. In the meantime, it is recommended in trade magazines not to buy any more wild-caught fish and to breed the fish.

The total population of the Banggai cardinalfish is estimated at 2.4 million specimens. It is now endangered by catching live fish for aquarium purposes. For the first time they were recorded in 2007 by the International Union for Conservation of Nature IUCN on the "Red List 2007". It is estimated that 700,000 to 900,000 animals are caught annually in Indonesia and shipped from Sulawesi and Bali to wholesalers of ornamental fish in Europe, North America and East Asia. The fish is caught as a sideline by only about 60 to 80 people who receive 3 US cents per fish. Because the animals have a very low reproductive rate and are only found in a very small area, the natural population cannot recover. In addition, the populations are isolated from each other, and once extinct occurrences cannot be repopulated by immigration. Many of the export fish were probably caught with the help of cyanide and died during transport, at various middlemen and shortly after they were bought from the aquarist. Many responsible specialist dealers therefore no longer sell the Banggai cardinalfish or only sell them offspring.