Thamesmead , a high-rise development in south east London in the 1990s. The city is searing heat. Jamie tries to hide his homosexuality, but is bullied by his classmates at every opportunity and has also had an eye on his classmate Ste. He lives with his single mother Sandra, who is secretly working on her plan to open her own pub and escape the harsh high-rise life. Crazy Leah, who dropped out of school and now spends her time listening to Mama Cass records and occasionally using drugs, lives next to them . Ste, who is regularly beaten by his older brother and alcoholic father, lives on the same floor.

When Ste is brutally beaten up by his brother one evening, Sandra takes him on and gives him shelter. Since there is no other bed in Sandra's apartment, Ste has to share the bed with Jamie. The second night they share the bed, Jamie massages Ste's injuries and hints of affection, which Ste rejects. At first Ste lies down at the foot of the bed, but later he joins Jamie and the two spend their first night together.

The next morning, Ste is the first to wake up and panic about the previous night, he evades Jamie over the next few days. Jamie, on the other hand, is sure of his feelings and wants to share them with Ste at a party that takes place some time later. At first Ste reacts in a panic and negative manner because he is afraid of the reaction of those around him. Leah implies that she knows about the relationship between the two, which makes Ste angry. But eventually he realizes that he can get involved in love, even if others might disapprove of it. Finally, he and Jamie visit a gay bar and then kiss passionately in the moonlight. Sandra discovers her son's secret and confronts him with it, but shows herself to be accepting.

Sandra receives the promise to be able to open a pub, which means her move out of the high-rise estate. She also breaks up with Tony, the last of her many significant other. In the evening, Jamie and Ste dance tightly together on the forecourt of the apartment block to the classic Dream a Little Dream of Me , which attracts the friendly and negative attention of some passers-by. Sandra and the neighbor Leah join the two boys' dance.

The play was first performed by Jonathan Harvey on July 28, 1993 at the Bush Theater in London and directed by Hettie MacDonald. Harvey's work takes place in Thamesmead , a district in east London, where many social housing designed in brutalist architecture are located. From the mid-1980s, Thamesmead hit the headlines as a social hotspot due to violent conflicts and high unemployment. The film was also given a socio-political significance through the portrayal of the love between two minors who were below the age of consent in Great Britain at the time . In 1994, the age of consent for male homosexuals was initially reduced from 21 to 18 years, and finally in 2000 to 16 years, thus bringing it into line with the heterosexual age of consent. 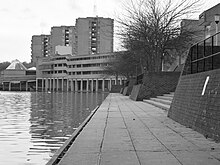 The play was guested in other theaters in the city and because of the success it was decided to film it by Channel Four Films , also directed by MacDonald. At first, Beautiful Thing was only to be shown as a TV film on Channel 4 , but later it was decided to make it a feature film. The young protagonists Berry, Neal and Empson all came from the same theater school in London, so they already had experience of one another. The shooting took place on location in Thamesmead. In contrast to many other homosexual films since the AIDS crisis, which only showed them as victims or outsiders, Harvey and MacDonald gave the film an optimistic mood despite all the difficulties.

Harvey can be seen in a cameo in the film as a man sitting in a wheelchair in the gay bar.

The Sony Pictures Classics film premiered in England on July 21, 1996, and was released in German cinemas in January 1997. Beautiful Thing grossed over $ 3 million at the box office. In January 2008 the German-language premiere of the play took place at the Junge Theater Bonn . The German performance was also the first in which the age of the main characters in the play matched that of the actors.

The soundtrack of the film consists almost exclusively of the music of the group The Mamas and the Papas and in particular the subsequent solo works of their singer Cass Elliot . In the film, Sandra tells the Urban Legend that Cass Elliot died of a sandwich when in fact she died of a heart attack. The song Sixteen Going on Seventeen from the musical The Sound of Music can also be heard when the two boys are in bed together.

Beautiful Thing received mostly positive reviews, with Rotten Tomatoes - based on 22 reviews - it has a positive rating of 91%. Roger Ebert wrote in his review in the Chicago Sun-Times of November 15, 1995 that the secondary characters such as Jamie's mother, Tony or the neighbor Leah would deliver “one surprise after the other”, that they would steal the show from the well-drawn gay main characters would. Looking back, Eric Henderson of Slant Magazine wrote that it was perhaps the most beloved gay teen movie from the 1990s. The film is a realistic drawing of “adolescent agony ”, which then finally gives way to a new romanticism.

In the German-speaking region, Cinema judged : “Theater woman Hettie MacDonald (...) tells the gay love story with humor, empathy and far from all fagot clichés. The intense play of the young leading actors, who were still theater students at the time of shooting, is also remarkable. ”The film service was also benevolent:“ A conventional, but lively staged and confidently played debut film with a harmonious setting. Located somewhere between touching romance and lively comedy, the film beneficially dispenses with all the "shrill" stereotypes in the cinematic representation of homosexuality. "The television magazine Prisma writes:" Hettie McDonald staged an optimistic comedy with a realistic background and a lot of dialogue joke that simultaneously is an amusing study on the coming out of a young person. "